The world of the simulation genre is about as mixed and varied as any other in gaming, as far as variety and gameplay differential goes. I have this weird obsession with them, most recently reviewing Bus Simulator 18, which I found grossly engaging, and for reasons I still can’t really grasp. But being a bus driver during my stint, was just really relaxing.

We know there’s been myriad Train Simulator games, Farm Simulators, Flight Simulators… Goat Simulators. But I wasn’t ready to grasp a blown up world as an insect in Bee Simulator. 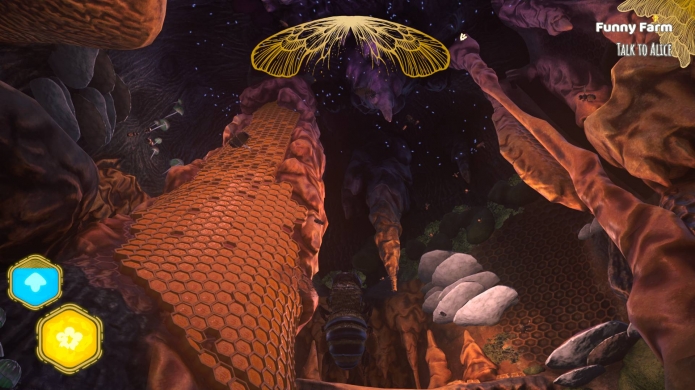 Out of the gate, this isn’t going to be everyone’s jam. It’s cutesy and kid-friendly. But the educational component that it does come with, is to be applauded. Secondly, it was built in Unreal Engine and looks very nice for an Indie release. But most importantly, you get to fly around an entire Central Park-inspired, err, central park. Naturally with a game setting like that, you do bee things -- collect pollen, bring the pollen back to your hive and avoid dangers such as pissy wasps and hornets. But as this is still a videogame, Varsav has injected other gameplay things to do. You’ll race other bees through rings and across the environment. You’ll help squirrels who are forgetful. You’ll scare away kids stomping on the park’s flowers; your actual source for survival. You’ll also fight those wasps and hornets. You’ll dance with fellow bees to get or give directions. You’ll even get trapped in spider webs and have to play a mini game in order to escape lest you be wrapped up as a meal for another day.

"She’s forever subjugated though, highlighting the importance of knowing your role within bee society, but like any good Farrellbee, she baulks at her responsibility..."


The ‘story’ itself follows a young bee, Farrellbee, in my case, who is born into the role of a worker bee. She’s instantly excited and sets off to do her job, but slowly starts getting tired of it. She continually asks the queen, who is a bit of a B herself (if you catch my meaning), if she can do something else to help the hive other than collecting pollen. She’s forever subjugated though, highlighting the importance of knowing your role within bee society, but like any good Farrellbee, she baulks at her responsibility and sets out to do what she can outside of the lines within the game’s numerous ‘chapters’. Even if it gets her in trouble.

The playspace is split between activities in your hive, which is based in the hollow of a dead tree set within the aforementioned ‘central park’, and within the park itself. Impressively, the park is massive and has plenty of interiors to explore as well as the outside. It’s full of people out enjoying picnics, playing in the park, at the fairground, taking in the Tropic Zone wonders and more.

Within all of this are markers with various mini-games and side-missions, as well as indications of where pollen is. Pollen is also split up between colour-coded levels of rarity, kind of like loot drops in RPGs. You can find the rarest stuff with “Bee Vision” which gives you a unique view of the world from a first-person perspective that highlights flowers in the graded colours, and many challenges are built around this. Outside of Bee Vision, you’re fixed to a third-person camera. 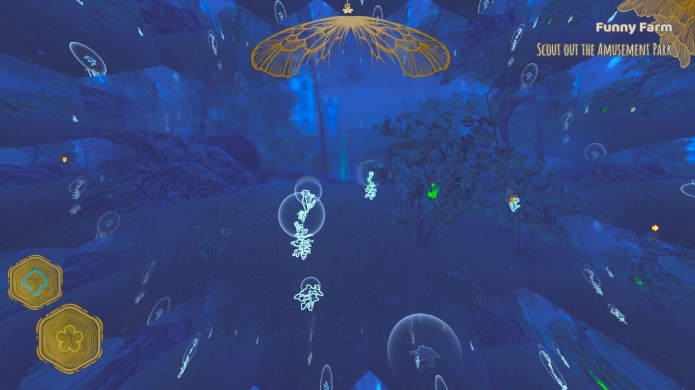 There are some serious problems from a control perspective. Flying is super-twitchy, and takes some getting used to, but when you do nail it, it’s fun, but slow. You have a “Beetro” meter (your speed), which you need to fill up by sucking nectar and sugar out of things in the environment, or by collecting speed boost tokens during challenges. However, starting a challenge that requires fast flying without even half of your meter full means you start that challenge with that amount. Burn through it and fail, then the challenge resets with you flying on empty, and unless one of those tokens is close by, and often they aren’t, you’ll fail over and over again. What adds to this frustration is the inability to opt out of a challenge once you’ve accepted it. Numerous times I had to quit to the main menu just to get out of it and go and farm for more blue speed.

Other challenges include timed collection of pollen, but problematically the inputs for Beetro, ascend and descend are slower than your twitchy flying, and you can’t stack Beetro with ascend, and you’ll find yourself crashing into the ground which halts any momentum you had, and with the slower inputs mentioned above means you’re now on the back foot(?). And if you’re racing a bee, but crash into a part of the environment, say, when trying to navigate a hollow log, or gopher hole (I presume that’s what they are), you’re better off waiting until the game yells at you for being too far away from your target and trying again that way. A simple challenge reset or quit option would have instantly fixed this. 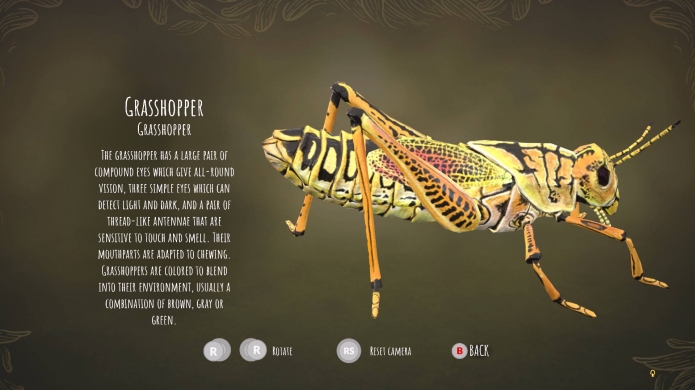 Moreover, abilities are gated. You don’t get the ability to sting until after the first few chapters. (Which also doesn’t make sense, because when a bee uses its stinger, it dies, but I digress.) Though that said, the frustrating parts of the game tend to ease off the further in you get and it becomes pretty fun to buzz about the place, it’s just a slog to push through the first parts of the experience, once you survive winter though, there’s an enjoyable game here.

You gain Knowledge Points for pollen collection and successful completion of missions, side-quests and mini-games, and these can be spent on unlocking trophies for your trophy room, with each addition being added to your journal, which is a mini encyclopedia of what insect or animal it is you’ve erected there. And that’s the best part of Bee Simulator, it is an educational game even adults can get behind. It champions the situation bees -- across the globe -- are in, and how important they are to all life on Earth. It has its pitfalls, and definitely serves up it’s fair share of frustration, but the point of the game is admirable, and with refinement in the control and camera departments, a beequel would be a very welcome addition to this hive.