A launch marred by bugs and technical issues, where some people are having trouble even playing the game, is rightfully something that needs to be taken into consideration. For us though, running on our new gaming rig, outside of performance issues related to frame-rate and stuttering our time with BattleTech has so far been smooth. With no real major crashes or issues across several hours of play. That is of course once we realised that BattleTech’s ultrawide monitor support was broken and we begrudgingly switched to a bordered 16:9 presentation.

Okay, so with that messy business out of the way Harebrained Schemes’ BattleTech does leave a great first-impression with its story and setting. Set in the same universe as the beloved MechWarrior series with mechanics and presentation that call on the turn-based tactical combat found in XCOM, BattleTech’s cinematic ambitions are as far reaching and rewarding as the mech customisation. Where you can happily spend minutes at a time going over weapon loadouts, adding Jump Jets, Heatsinks, and other goodies to maximise a mech. 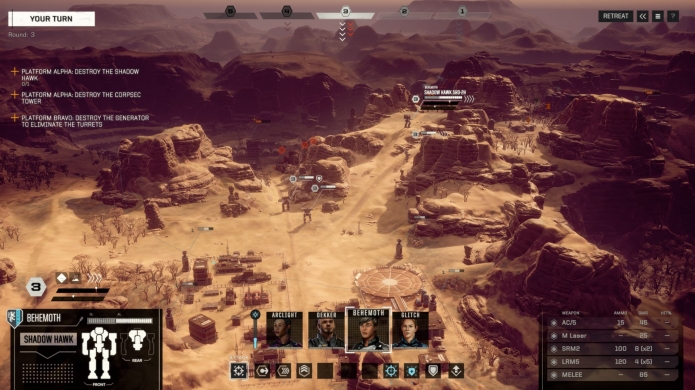 BattleTech does a great job of presenting the world in which it takes place, where space travel has led to planetary colonisation with wars, factions, and mercenary groups scattered throughout the galaxy. There are corporations and banks that control interstellar travel, pirates that plague fringe colonies, and houses that rule over entire sectors. In lieu of a traditional mission structure found in strategy titles that focus heavily on character and story, BattleTech opens things up by putting you in charge of an entire crew where you can pick and choose between mercenary contracts, spend time building up a mech arsenal, talk to your crew members, or simply follow the path of the story.

One of the big plusses, despite its modest budget, is the often-wonderful writing, presentation, and original score found throughout BattleTech. The graphic-novel approach to cinematic sequences more than sell the grand nature of the story being told, as does the sparse and well-executed voice acting. Built on the rich history of the BattleTech tabletop game, there’s detail and a coherent history found with every introduction of a new planet, faction, or even type of mech. For those interested in the sort of sci-fi world presented in BattleTech, the ability to live the life of an interstellar mercenary taking on jobs with a full crew and cargo hold filled with mechs – is hard to resist.


Especially when you can shape what type of commander you want to be. Are you in it for the money, revenge, or honour.

The bulk of one’s time with BattleTech though, rightfully, is spent in combat. Where, after choosing four MechWarriors and four mechs for them to pilot missions become tactical exercises in managing position, heat levels, and taking out all manner of opposing vehicles, structures, and mechs. Even without any turn-based experience fans of the more action-heavy MechWarrior series will find a lot of familiarity. Where deciding on which weapons to fire and what specific enemy mech limb or systems to target feels in a lot of ways like coming home. As does sending a mech into some shallow water to cool off.

Outside of a spotty camera that often obscures the action, for the most part the combat is well executed. Less exciting that XCOM, but that’s due to the slower moving multiple tonnes of metal and a distinctly more measured pace. That being said, it doesn’t get much better than watching a mech stomp and crush a tank. Or, after using Jump Jets to literally land a killing blow - sit there and wonder if the critical leg damage was worth it. 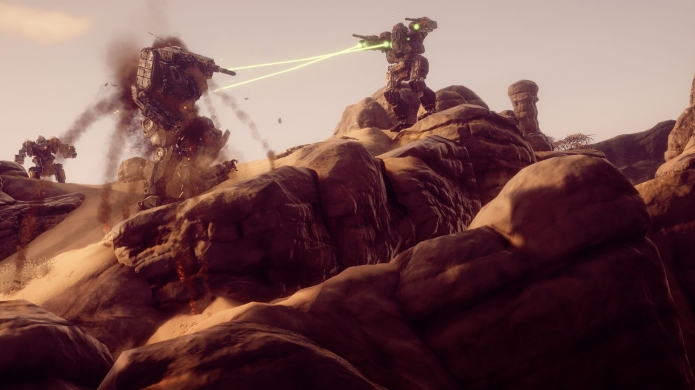 The slower pace of the combat does have a few detrimental side-effects. If you need to go from one side of the map to the other, just to trigger a completion, you might be sitting there for five minutes moving a little closer each turn. This is detrimental to the pacing because engaging with enemies and seeing all manner of weapons fire and cause damage is where BattleTech shines. Even if the RNG nature of scoring a hit or not can sometimes be the reason you suffer heavy losses. From a visual standpoint BattleTech is often impressive but also a little underwhelming. Performance-wise it doesn’t run great even on a high-end PC. With environment detail that doesn’t impress as often as it should.

In BattleTech there’s an almost constant push to put you into combat and on a mission, where sitting idly in your large spaceship accrues costs in the form of pilot salaries, upkeep, and even loan repayments. There’s a harshness found in these mechanics where just scraping through a mission can leave you with an obscene medical and repair bill, not to mention the month or two it might take to fix all the damage. BattleTech is a ‘save often’ experience through and through, where after some basic explanation of movement and combat you’re thrown into the deep end. It’s often hard to gauge just how difficult a job might be too, even with the five-helmet rating provided by the job board.


For those wanting to simply dive deep into the combat, unfortunately there doesn’t seem to be any way to simply focus on this side of the experience, as before long you’ll need to have a deep understanding of weapon loadouts and weight balancing for mechs. Which occurs as soon as you take any sort major damage or find yourself in possession of a refurbished hunk of metallic warfare. It’s an all or nothing approach that is refreshing but requires a few more tutorials outside of trial-and-error. You could play for hours before grasping the difference between each type of mech.

BattleTech’s ambitions may exceed its grasp, but there is a lot to love about the entire package. From the tactical combat to the great story and characterisation. Marred by mostly technical issues, it’s a title that should theoretically improve over time. In the meantime, even in a scrappy state, the MechWarrior meets XCOM promise mostly delivers.
Latest Comments
Link