The pack-in launch title, a game that ships alongside a brand-new console, is something of a rarity - the last time it happened was with the Nintendo Wii and Wii Sports. Before then? The 8-bit and 16-bit era. The most memorable might be Alex the Kidd in Miracle World on the Sega Master System II, on the account of it coming preloaded on the system and that it would fire up whenever the cart you plugged-in failed to be recognised.

Like that vibrant slice of past platforming glory, Astro’s Playroom comes pre-installed (modern for preloaded) on all PlayStation 5 consoles getting unboxed and set up later this week. Ready to fire up as soon as the brand-new-console login and update dance is complete.

Our full review of the PlayStation 5 here.

On paper it makes sense for Astro’s Playroom to be accessible to all PS5 owners on day one. At its core it’s a robust gaming experience tailor-made to highlight the various advancements and features found within the new DualSense controller. In a new 3D platformer starring little Astro who goes on an adventure inside the very console on which his Playroom’s digital bits and bytes sit.

From HD-rumbles to Adaptive Triggers to touch-controls, motion-controls, a microphone, and speaker, Sony’s latest bit of input tech is just about as impressive as the liquid cooled GPU sitting inside the formidable sci-fi chic that is the PlayStation 5. So the question heading into Astro’s Playroom becomes - is it actually a game, or more of a tech demo to showcase the fancy new next-gen controller Sony has been cooking up for years?

At its core it’s a robust gaming experience tailor-made to highlight the various advancements and features found in the new DualSense controller.


The answer to that is surprising, and not from the fact that it’s a yes on both counts. Astro’s Playroom is a game that can stand on its own whilst offering a number of tech demo-like sequences tailor-made to show off individual features or combinations thereof found within and on the new DualSense controller. The surprise comes from the additional and prominent dose of celebration found throughout the experience - where the past, present, and future of PlayStation hardware, no matter how big or small, is here. Pure fan service in the best possible sense of the term, hidden Artifacts scattered throughout each word (un)cover decades of well-known peripherals like the original DualShock to lesser known oddities like network adaptors back when online gaming was mostly a PC thing. 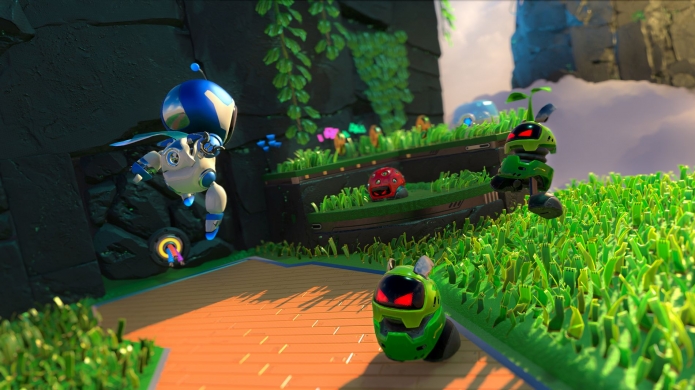 In terms of what’s on offer Astro’s Playroom may not be on par with a full-sized release like Super Mario Odyssey length-wise, you can breeze through it in a couple of hours, but it presents the same charm and attitude towards its property as that Nintendo Switch classic. Except this time the thing being celebrated is four generations of PlayStation hardware, alongside the shiny new PS5.

The experience even begins with Astro jumping out of a perfectly modeled 3D version of the DualSense controller, and from there as the little robot you can access the four worlds on offer - Cooling Springs, GPU Jungle, Memory Meadows, and SSD Speedway. Even though that may read like a list of lazy names, each suits the charming and inventive locations well. The music you hear is all positive too and even features vocoder-infused lyrics about SSDs and GPUs as if they were lovers or potential lovers dancing in the crowd.

Everything is vibrant, colourful, cheerful, and downright infectious in Astro’s Playroom - with gameplay presenting the usual platforming fare but now with the sensation of raindrops or hailstones hitting Astro’s little umbrella cap as he moves about, and the positional HD rumble of a cement-like goo as you trawl through some muck. 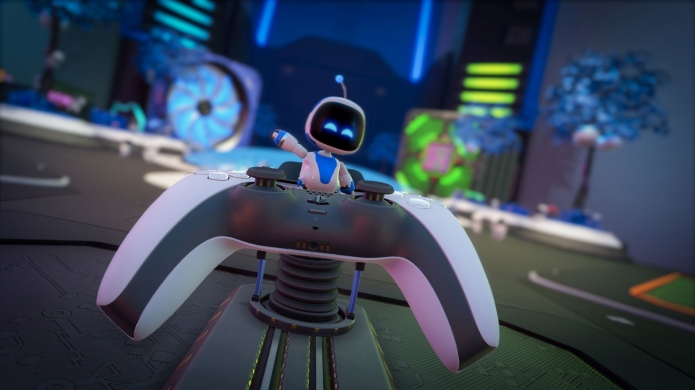 From there picking up a bow-and-arrow and feeling the adaptive triggers behave in a way that is almost magic (in that there’s no line between how it should feel versus how it adapts and changes from moment to moment) is wonderful. As is controlling a rocket and feeling the thrust of independent engines firing. What’s great about each section, outside of a handful that feel a little too forced or tech-demo-y, is that it all works as a summation of the capabilities of the DuelSense - and the console - as opposed to ‘hey, here’s this one thing’.

In terms of what’s on offer Astro’s Playroom may not be on par with a full-sized release like Super Mario Odyssey length-wise, you can breeze through it in a couple of hours, but it presents the same charm and attitude towards its property as that Nintendo Switch classic.


Crisp visuals and smooth performance paired with tried-and-true gameplay and a controller that feels and behaves unlike anything that has come before - Astro’s Playroom is well worth spending some of those first PS5 moments with. The speaker, the motion controls (when limited to simple motions only), the impressive HD rumble, the adaptive triggers, it’s all here and impressive. Playing off the in-game visuals and surround sound coming through your headset or speaker setup it’s as much a proof of concept as it is a fine 3D platformer and a celebration of all things PlayStation. It leaves you wanting, and pining for a full-sized Astro adventure too. One built from the ground-up for Sony’s new console and groundbreaking new controller.
Follow Us
Latest Reviews
More...
News Feed
Advertisement
Latest Threads
Log In
Create Account | Lost your password?