It’s going to sound all-too familiar, but the simplest way to describe Triumph Studios’ Age of Wonders 3: Planetfall is that it’s Civilization meets XCOM. Honestly, if you like either series, and outlandish sci-fi with a touch of camp, then you need go no further than Planetfall. That is, however, unless you’re not a full-blown 4X strategist. The thing is, Triumph’s departure from their usual Age of Wonders fantasy lean attempts to ‘fast track’ the 4X experience, likely in an attempt to draw in new players. But fast tracking this is the game’s initial downfall -- the tutorial quickly becomes an overload of information, as if through a drive-thru window; a muffled recall of your order over an ageing takeaway two-way speaker. By the time you’re through, and you’ve made it home to eat, you don’t entirely know what it is you ordered, but the experience was so traumatic, that you just suck it up and eat what’s in front of you anyway. 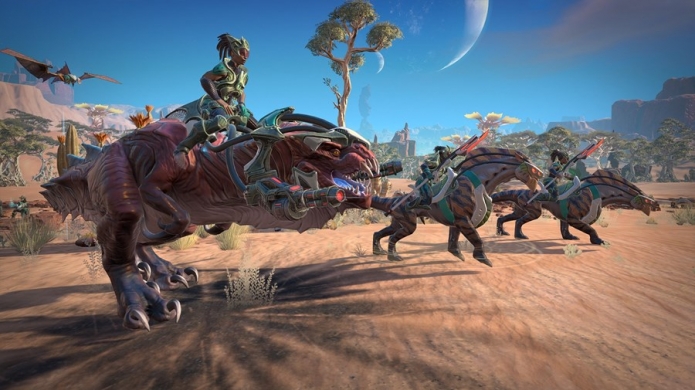 There is a fun game here. And if you eat 4X for breakfast and absorb every micro and macro piece of information, you’ll dig the depth at which the game presents itself. The option to Automate a lot of your decisions is helpful for those who are 2X, at best, but what this winds up highlighting is that a lot of the game’s information and depth can seem superfluous. Moreover, the Civilisation building and empire expansion side of the game often ends without a seeming followthrough leaving a lot of your hard work feeling unfinished and just plain unimportant. The further you get into the game the more it does begin to feel meaningful, but early on it just doesn’t impact.

"The schizophrenic nature of the game’s story and premise largely highlights the same thing in its disparate gameplay activities..."


As the game’s name suggests, you’ll make planetfall on a number of planets within the planet-hopping space that makes up the space operatic narrative that is half fluff and half as silly as this sentence and the amount of times I managed to use “space” and “planet” within it. It’s vague in areas, and unnecessarily deep in others. The schizophrenic nature of the game’s story and premise largely highlights the same thing in its disparate gameplay activities -- upon planetall: found a city, choose productions, build units, set out for exploration, gain resources, upgrade cities and units through said resources, and ostensibly ‘conquer’ the space, and the ‘invasive’ aliens who inhabit it. 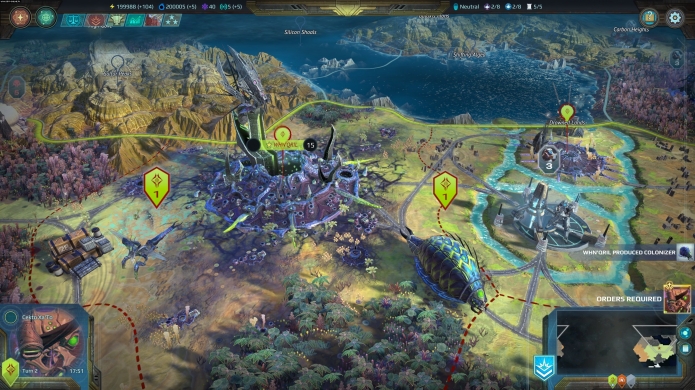 Then, you get to combat where we get all turn-based tactics XCOMey. Control six units with your Hero character, manage grid-based movement, utilise cover, approximate hit chances and crit percentages and tactically attempt to essentially outflank and outmanoeuvre the enemy. Cover is destructible, which means you do need to manage movement and can’t just park your grenade-throwing guys behind cover where they can just lob at the enemy. And, almost sadly, I’d say that this side of the game is more interesting than the hexagonal tile movement Civ part of each planetfall.

"The schizophrenic nature of the game’s story and premise largely highlights the same thing in its disparate gameplay activities..."


Each world is also procedurally-generated but it’s hardly a boon, it just seems like it was an easier option, because you don’t ever really feel overly attached to any planet you land on. And it’s here that the game lets itself down. With the Civ side of the game, it would have been far more interesting to have a much larger map to explore with less of a linear narrative directive, and more agency for the player to explore, build and grow said planet. Then, leave, planetfall elsewhere and repeat the process. But the devs just seemed lost in trying to tie their influences together. And this is made all the more apparent in the depth of the aforementioned skill-trees and the like. It’s one thing to work towards upgrades, new tech and better skills, but it goes too far for what doesn’t really need to be taken that far. The specific objectives and lack of player agency in planet settlement (or conquering, really) belies the need for the presented depth in the game’s sub-menus and player/faction management. 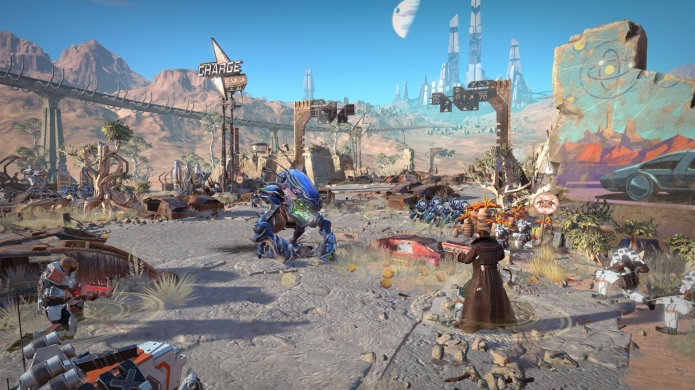 And on that cheesy narrative, the setup is just really shallow and takes zero advantage of what should have been more outlandish and more bold in exploration of the idea we’re planet-hopping in outer space. The Fall of the Star Union is your main objective, in that you need to bring it back to its glory years. You see, during two centuries of cryosleep, other factions (aliens) have put their alien fingers in gloop glorp pies spread throughout the system and its your job to stop them. And the factions aren’t all that imaginable either, they’re trope at best with white humans, insectoid aliens, robots… need I say more?

If you feel the need to thoroughly rake through the game’s (in parts) superfluous skill trees, productions and upgrade each and every unit, upgrade all settlements and go off the beaten track, even when the game often insists you don’t, and generally avoid leaving each planetfall scenario until you’ve exhausted all hexes on the map and gone into every single combat situation you could, then you’ll likely find something here, but for mine the game needed to mould its influences more completely with a more authoritative balance while adding more of its own ideas. The story is simply too hammy to play only for it, which leaves the gameplay and unfortunately you’d need to be a diehard for it to drag you in.

What’s interesting about that last statement, is that one of the things the team is most proud of is they managed to build it for consoles as well, and to be fair, it handles wonderfully on a controller, so there is some kudos there for their efforts to open up the player base and invite in potential new audiences, but they will just come across all of the above. The game itself, if you follow the heavily developer-directed path laid before you, has roughly 20-25 hours in it, and there’s more content yet to come, so balances and new content could sharpen the experience, but out of the gate it’s simply a schizophrenic collection of two key genres that, in principle, should gel, but here they kind of get in each other’s way.