A celebration of the long-running franchise and a great way to kick off Switch gaming in 2023.
Fire Emblem Engage Review - Strategy Gold
Elden Ring - The Final Hands-On Preview
Post by Joaby @ 02:00am 11/02/22 | Comments
Ahead of review access and the game's eventual retail release, we were given a final hands-on session with Elden Ring, which naturally meant our resident Souls expert and Hidetaki tragic, Joab Gilroy, took mounted point on proceedings. Read on for his final word... I felt so smug, carefully picking off the score of adds surrounding the convoy. I'd played the absolute hell out of the Closed Network Test late last year, so I felt I knew what I had to do. I picked a Dexterity-based character — the Samurai — because, well, I generally prefer Dex in my Souls games. And I'd quickly visited three of the game's bonfires, which let me unlock the 'Spectral Steed', a mount that lets you careen through the game-world much faster than you might on foot.

With an Uchigatana in hand and knowledge in my heart, I beelined for the convoy, which I knew marched steadily along the road towards the Stormgate, perhaps heading to Stormveil Castle — where the final boss of that early preview lurked a few months back.

My first surprise came at the hands of a terrifying Dark Knight — not Batman, but a black-armoured rider whose name I jotted down but couldn't decipher later because my handwriting is woeful. It's used by fencers as proof that the pen sometimes isn't mightier than the sword. To call it chicken scratch would be a grave insult to those noble birds that make up our Hot'n'Spicy Chicken Tenders. You get the idea. As formidable a foe as the shiny Tree Sentinel you might have seen in the Network Test build, the Dark Rider had me instead cee-lining for the convoy (after I retrieved my dropped souls).


Still, it was a moment of note, I thought. Here was a clear difference from the previous Joab’s-grubby-hands-on. In theory, I was playing Elden Ring as it would exist when the game releases later this month. Or at least a version very close to it — I never found the ability to invade other players (although there were theoretically people to invade), and I got the feeling they removed this from the preview build to stop me from invading the shit out of my colleagues.

"I was the base level of the Samurai, but while these guys were out partying I had studied the blade — I was squishy, but formidable...”


All this means is that the Closed Network Test some of us played last year was clearly an altered version of the game. I pondered this concept as I whittled away at the 20-ish adds surrounding the convoy. I was the base level of the Samurai, but while these guys were out partying I had studied the blade — I was squishy, but formidable. I took a few hits, but thanks to Elden Ring's simple but effective implementation of mounted combat I was able to take them all out.

Mounted combat in Elden Ring isn't complex by any means. You can melee or ranged attack from the back of your spirit steed, with ranged attacks resembling the on-foot variety — you can lock onto targets and fire with diminished accuracy, or you can aim down sights and pick them off like a dark ages sniper. 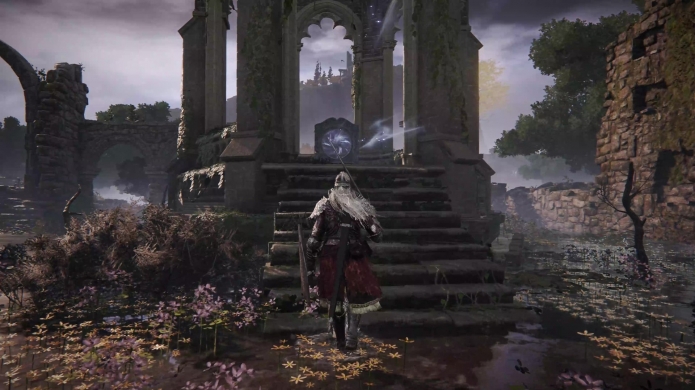 Melee is a little different. You attack using the shoulder buttons, as you always do in Souls games, but here you use all four. LB and LT allow you to do light and heavy attacks on the left hand side of your horse, while RB and RT work for the right hand side. Your range and attack strength hinge on your weapon — longer weapons let you attack from further away and all of that.

It takes some getting used to. Souls games are quite particular about the physicality of their weapons, and Elden Ring is no different — if your weapon doesn't collide with an enemy, then it didn't hit. When you're on foot that's easy to manage — stand somewhere if you want to hit something (and watch out for the dreaded AI attack that clips through the walls of a tight hallway).

On a horse, magic or not, it can be tricky to manage your positioning as easily. If you imagine your character as existing on an X and Y axis, a typical on-foot attack will strike anyone within range on the X axis. But when mounted your horse occupies that space — suddenly you need to focus on your Y axis instead.


Once you get a handle on it, you start to feel like an ancient Cavalry officer, charging through the hordes, cutting here and there as you gallop. Mounted combat against other horse riders — like the aforementioned Dark Knight, or the foreboding Tree Sentinel — requires a similar adjustment, and encourages you to learn how to make use of your Spectral Steed's dash ability, which lets it quickly shift out of the way when needed.

The convoy in question had a few mounted foes for me to practice on, but it's a Souls game — the stakes, even when practising, are higher than anyone would usually care for. So I took it slow, I carefully aggro'd each enemy the way people used to before Leroy Jenkins ruined raiding and eventually I was down to the last two foes. Two trolls, chained to the front of the giant gothic carriage, pulling it towards its destination.

"I'd earned oodles of XP, I'd defeated a whole mess of enemies, and I'd earned my reward...”


As a Dexterity-focused fighter with oodles of stamina, these two were actually the easiest enemies to defeat of the entire encounter. They were chained to a carriage, and they were barely able to move as it was. I'd earned oodles of XP, I'd defeated a whole mess of enemies, and I'd earned my reward. I ran around the back of the carriage, to where the chest awaited. In the Network Test build, this chest contained a full set of fantastic armour. Here, I received a great two-handed axe. As a Dexterity-focused fighter, this was useless to me.

Sadly, I didn't immediately learn my lesson. I knew of a mine nearby where you could acquire a deadly katana. Closed Network Test build and all that. It too was guarded by a troll — a much bigger one than the convoy pullers.

But the truth was I was still trapped in a very small town mindset. The boss in question, called the Stonedigger Troll was — like the enemies surrounding the convoy earlier — a feature in the Closed Network Test. After defeating him I broke free from the shackles of the CNT and ventured out into the vast breadth of Elden Ring — and it is vast — and I saw much nastier enemies. But I'm loath to go into too much detail on everything I saw — I don't want to spoil things for the explorers out there. So here's a topline rundown.

I fought invaders — AI invaders, red spirits who will invade theoretically every player who ventures into their given area — who cast so many spells that after dodging I barely had the stamina needed to actually hit them. I lost one invasion fight in what must have been a photo finish when I struck at them mere nanoseconds after they hit me.


Knowing I only had six hours with the game, I belted east as far as I could. I passed Erdtree's guarded by malevolent spirits, I got invited to something called The Table of Lost Grace, which reminded me of the Nexus from Demon's Souls.

"I spent 10 minutes chopping it in its tail while it slept just to see if I could, and it worked...”


I cut down a giant lumbering mausoleum, which offered me the opportunity to do something called a "Remembrance Duplication", and I never worked out what that meant. I bought something called a Note: Land Squirts which sounds like what you'd get if George R R Martin overwrote the concept of toilet paper.

And I killed the biggest goddamn dragon I have ever seen in any game. And I don't think I was supposed to. I saw what looked like a tall white tower off in the distance and as I rode towards it, I realised it was the spiny first finger of a dragon god's wing. I spent 10 minutes chopping it in its tail while it slept just to see if I could, and it worked. It died, and it gave me so much XP and so many Dragon hearts that I instantly worried that I'd made a grave error.

But I won't know whether I did or not until the 25th of February, when Elden Ring finally drops. I will say that the game ran like a dream, knocking a gorgeous 4K at 60 frames per-second out of the park on the PC at hand — which was restricted to a "mere" GeForce 3070 Ti. In this near-final state it runs well, there were no visual bugs, and it seems like it's the sort of open-world experience I've been waiting for this whole time. Dare I say, that we have been waiting for.

Even though the biggest challenge for Souls fans will be divorcing themselves from their small town state of mind — people getting into Elden Ring already know they're in for a challenge.

Read more about Elden Ring on the game page - we've got the latest news, screenshots, videos, and more!
Tweet