An OC beast that runs cool, silent, and also happens to be built like Rolls Royce.
MSI GeForce RTX 3080 Gaming X Trio Review
Minecraft with RTX – Beauty in Blocks
Post by KostaAndreadis @ 11:00pm 16/04/20 | Comments
After going hands-on last year we finally get to experience Minecraft's stunning RTX update on our own hardware. And it's nothing short of a game-changer.


For all the technical wizardry that has gone into making real-time ray-tracing a reality, from hardware innovation brought to the market by NVIDIA with its GeForce RTX line of graphics cards, through to development software and tool integration with Microsoft’s DirectX API - Minecraft with RTX brings a certain level of truth to an age-old saying. That there’s beauty in simplicity.

And that beauty is stunning in motion.

With its large blocks, simple textures, and freedom to create modular worlds that can scale to the size of middle-earth or the actual Earth on which we all live, Minecraft remains one of the most popular games of all time for good reason. The power it brings to creators, explorers, and digital adventurers is nothing short of timeless. And endless. With Minecraft’s RTX update NVIDIA has spent considerable time collaborating with both Microsoft and Minecraft developer Mojang to bring a hypothetical yet very real light switch to the experience.

“The power it brings to creators, explorers, and digital adventurers is nothing short of timeless. And endless."


That light switch, full ray-tracing (or path-tracing) that involves the use of measuring light bouncing around the world to render shadows, reflections, global illumination, and just about anything else associated with the stuff that makes you reach for your nearest pair of shades. Where some titles opt for raytraced shadows or reflections - single implementations - Minecraft’s ray-tracing is all-encompassing. A true glimpse into the future. 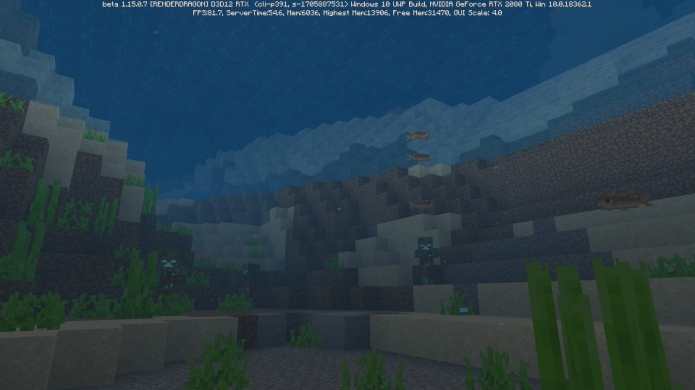 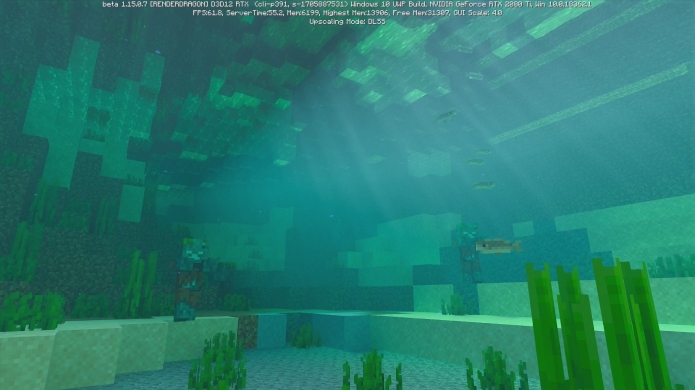 To showcase the technology, which in one fell swoop makes Minecraft one of the most visually impressive and technically demanding games to play in 2020, NVIDIA has enlisted the talents of renowned Minecraft builders to create worlds that make use of ray-tracing and the new physically-based materials NVIDIA has brought the block-shaped table.

The latter brings a certain brand of secret source to Minecraft with RTX because textures in the base version of Minecraft only make use of two settings - colour and opacity. Physically Based Rendering (or PBR) uses the above in addition to metallic, emissive, roughness and normal maps to allow the creation of transparent water, ice, shiny pieces of gold, glowing translucent lava, and other effects that works alongside raytracing for the first time. 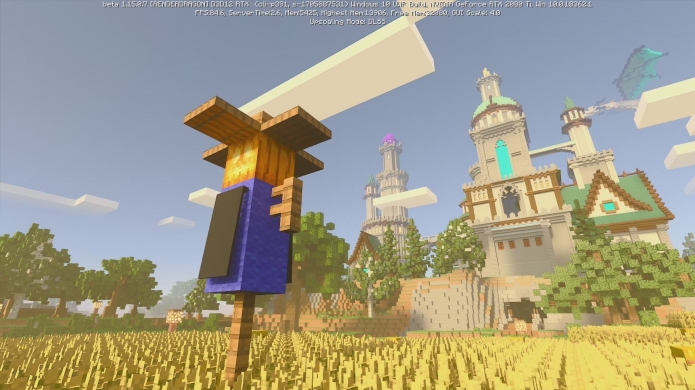 Again, it’s all stunning in motion.

The Color, Light and Shadow RTX world created by Aussie PearlescentMoon creates several examples and rooms that showcase and introduce how raytracing interacts with materials and light. Aquatic Adventure RTX by Dr_Bond opts for a vast palace in the middle of a vibrant body of water to immediately position Minecraft with RTX as something creators will be working with for years to realise their dreams.

“In one fell swoop [this] makes Minecraft one of the most visually impressive and technically demanding games to play in 2020."


Of Temples & Totems RTX: A Tale of Elemental Artifacts by Razzleberries puts you in the middle of a jungle oasis where fresh water and trees bask and bathe in sunlight. As nightfall hits the windmill in the medieval fantasy setting of GeminiTay’s Crystal Palace RTX, you get to see how the light from torches, the stars, and the moon illuminate vast fields and castle walls. 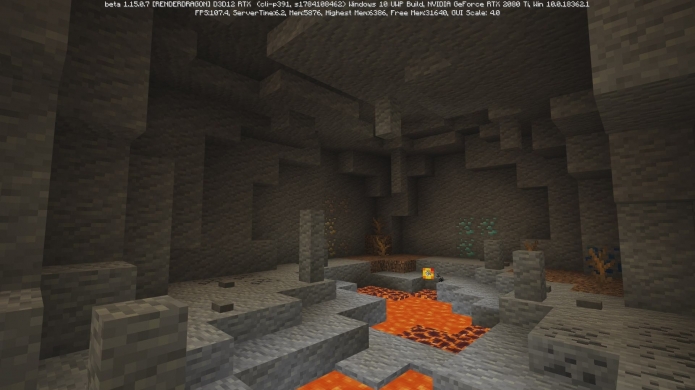 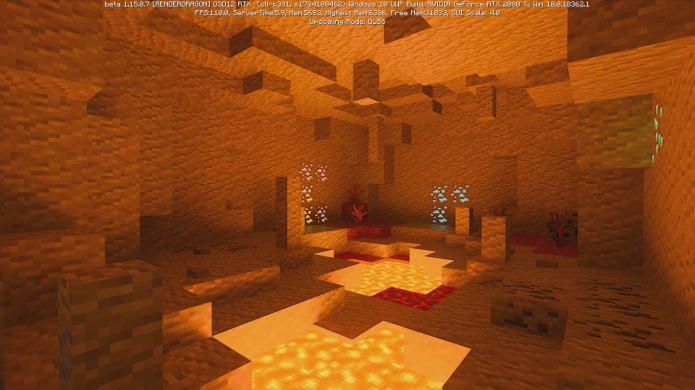 The catch of course is that currently Minecraft for RTX is only available for GeForce RTX owners and via the Windows 10 version of the game. As the update also makes use of NVIDIA’s DLSS 2.0 AI rendering in addition to hardware-based ray-tracing, performance is impressive – if a little all over the place. And we say that, weirdly, in a positive way. The first batch of RTX worlds to explore aren’t mere tech demoes, they’re huge Minecraft creations that will put a strain on hardware with or without ray-tracing enabled.

With RTX On, at 4K, with DLSS 2.0 we saw several sections hits and maintain 60 frames-per-second on an NVIDIA GeForce RTX 2080 Ti. The flip side to this was that with the same card, with RTX Off, during a particularly detailed section with the draw-distance cranked to the max we saw sub 60 fps at 1080p. In its beta form NVIDIA and its team of builders haven’t offered up cleverly designed but limited tech demos, no, these are all unfettered and unrestrained Minecraft worlds to explore. 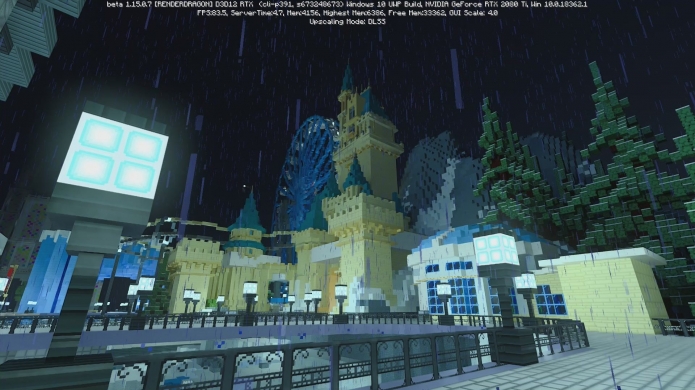 And to create. Which makes the beta release of Minecraft with RTX something of a game-changer in the purest sense of the term. The popular and world-renown sandbox that first debuted in 2011 has just entered its next phase – and one that will no doubt power the endless creativity of the community at large for the next decade.