Tavern Master is a stress-free management game where you run the only medieval inn in town.
We Run a Fantasy Inn... Our Tavern Master Review
QuakCon 2018 - We Chat to Aussie Quake Champion Daniel "dandaking" De Sousa
Post by KostaAndreadis @ 04:58pm 06/08/18 | Comments
We chat to Australian Quake Champion Daniel "dandaking" De Sousa Ahead of QuakeCon


With QuakeCon scheduled to take place this weekend, alongside the gameplay reveal of the highly anticipated DOOM: Eternal, there’s also the matter of competitive Quake Champions. Where the greatest players from across the globe make their way to the convention for both team and solo competition. The latest iteration in the long-running Quake series, that dates to the dawn of online shooting, Quake Champions is still technically in beta. But, as to be expected even in this state id Software’s shooter is still captures that classic Quake feel whilst introducing the concept of Champions – each with their own unique looks and abilities.

Ahead of this weekend’s competition we had the chance to chat with Daniel "dandaking" De Sousa, one of Australia’s best Quake players currently playing for Corvidae. If the name is familiar that’s because he qualified to compete at QuakeCon last year with an impressive 280 ping. Impressive in just how perfectly Australian that is and how it reminds us of the days of using a phone-line to dial-in and then connect to servers for some competitive shooter action. 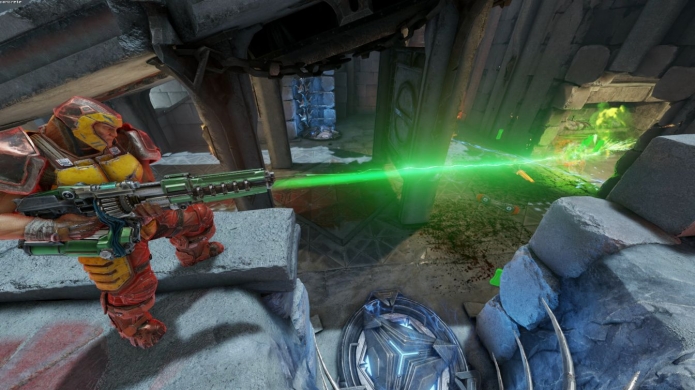 You made headlines last year for being able to play at the professional level with a high-ping. Growing up in Australia is there anything specific about our history of high-pings to overseas servers that lends itself to specific Quake strategies? Or does it require superhuman perception?

It’s definitely all about the superhuman perception, just kidding! It’s about strategy honestly, which was easier for me to adapt to because when I first started gaming it was on 56k internet. Back then even on Australian servers I would have 250-ping, so I have a lot of experience because of that. From there you just have to work out which strategies are still effective on high-ping and which aren't. In Quake Champions the Railgun is quite useable on high ping. So that was the strength I played, keeping my distance with its range advantage and wearing down my opponent. Since that was already my favourite game style on low ping it came together well, and I consider myself lucky in that sense.

Naturally, local servers with low-ping play are common too, but is there any sort of adjustment you need to make when shifting gear from remote to local play? Especially as you head to various tournaments and practise with various people?

Every time you travel to a different part of the world and play in queue against the people living there you can instantly notice the difference in regional playstyles. Being adaptable is the biggest skill any professional gamer can have, because you need to be able to adapt on the fly against opponents. At an international tournament you will be matched up against players from all different countries and regions who each have a different strategy and style which you’ll need to figure out to succeed. This is why you often find that certain players will be more effective against certain other styles of players, purely based off the stylistic match-up. So, I try to make my own style a mix of everything and have trained myself for many situations to be ready when I come up against something new. At least that's the hope! 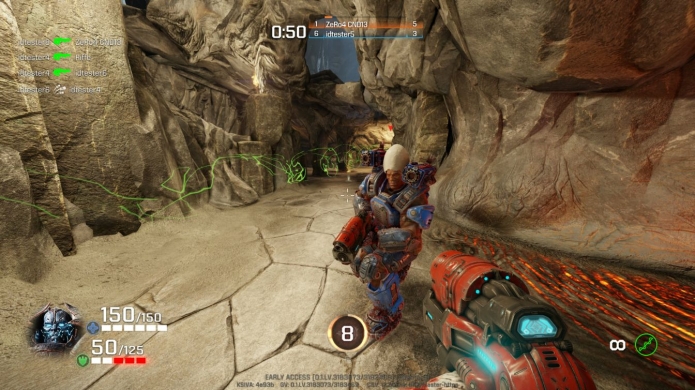 With QuakeCon literally around the corner (and a flight or two), what sort of preparation or training have you been taking part in recently?

I am always working on strategies around Champion abilities and what works best on which map because each one can be so different from the next. I will put in hours just going over different combinations in game so that when they happen I will be prepared for them. It always comes down to preparation and practice if you want to be the best. I have been playing a lot more than I usually would, playing up to 4 hours per day or watching VODs of the best players to learn what strategies they are playing so I can figure out what will work well against them. In Australia we also have to say a massive thanks to 4SeasonsGaming.com.au and in particular Michael 'Mickzerofive' Jenkins for running weekly tournaments for us to compete in. They have pushed for a higher level of skill which produced a larger variety of playstyles and helped us prepare for a tournament setting as well.

You've been a veteran Quake player for quite a while now, how do you feel Quake Champions fits into the series especially when it comes to the competitive scene?

Personally, it is my favourite of all the Quake games. I had become a little bored after Quake Live, but Quake Champions’ inclusion of Champion abilities just makes for a whole other layer of skill. People who were not good at previous iterations may be able to reach a top level in this game because of it. But it's also a whole new learning experience for players like me. I think that this game has the potential to be a lot more competitive than previous Quakes where in those versions the smallest mistake could be unforgiving and make it hard to work your way back into the game. In Quake Champions even if your opponent has played his game perfectly you always have an opportunity to make a play with an ability, which is why I personally love it. I think it makes for the highest-octane gameplay and the best for viewership as well.

Still in beta what are some of the most surprising changes or updates that have stood out to you over the past year - or since the last QuakeCon?

Probably the most surprising for me was when they changed the health/armor ratio to be universal between characters. For example, the Light Champions all have 100/50, Medium Champions have 100/100, and Heavy Champions 100/150. This changed the game in terms of the character balance quite a lot and has meant that the overall playstyle of the game changed. With that in mind the game does feel like it’s in a really great place, so I think that was a positive improvement.

Duel is perhaps one of the most intense experiences one can have when playing Quake, what is it about Duel (1v1) that adds a new layer over 2v2 team-play?

In Duel, every life matters! In 2vs2 team-play you have a frag limit of 50 which means certain situations you may just go in for an opportunity without thinking it through. If it doesn’t work out, you can make up for it. In Duel every time you die you are now at a massive disadvantage to your opponent because now the time is against you. Maybe you’re a Champion down against a champion that counters yours, plus they have control over the map with the weaponry they need. With every life you need to make sure that you are not just throwing it away. And because of this, players will often think through a strategy they want to use maybe minutes ahead of time. It can make for some of the most intellectual gameplay - which in my opinion is what makes a Quake Duel such an intense experience. And victory even more rewarding.

Thanks to Daniel for his time, and Bethesda for arranging this interview. AusGamers will be attending QuakeCon 2018 as a guest of Bethesda's. In the mean-time be sure to check out his Twitch channel - which will no doubt resume broadcating after QuakeCon