We've taken a stab at our 10 best games to play when in the middle of a crisis. From recent hits to gems we keep coming back to.
The Good Place - Finding Your Videogame Comfort Zone
AusGamers@BlizzCon – The StarCraft II Round-Up
Post by KostaAndreadis @ 03:02pm 11/11/16 | Comments
We go through all the StarCraft II action from BlizzCon 2016. From the return of Alexei Stukov to the World Championship Series finals!


One of the great things about BlizzCon, amongst many, is that Blizzard carves out a sizable portion of the show floor, in addition to the opening ceremony, panels, and Esports arenas, for each of its franchises. And although many of us see Esports as a new thing that had popped up in the last few years, StarCraft II has a long history with competition -- thanks to the enduring popularity of the StarCraft II World Championship Series.

And, if you go back even further and look at the original StraCraft, the franchise was doing the whole Esports thing long before everyone else jumped on the bandwagon. At BlizzCon, the StarCraft love extended beyond Esports with the announcement of some new content coming to StarCraft II and even an AI partnership that could lead us into the end times.

DeepMind and StarCraft II Partner to Bring Forth the Singularity

Okay, so my fear of Artificial Intelligence and robots that can outsmart humans is probably the result of watching too many sci-fi movies and reading one too many Asimov tales growing up. Which meant that the announcement that Blizzard were partnering with DeepMind, and opening StarCraft II to AI and Machine Learning researchers around the world, is a very good (yet scary) thing. If the name DeepMind sounds familiar, it’s probably because they were responsible for the AlphaGo AI beating world champion Go player Lee Sedol in the ancient and complex game of Go. 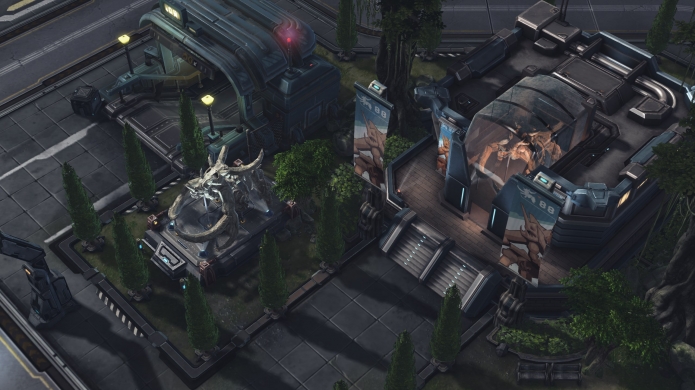 And now it seems the ancient and complex game of StarCraft is next on the cards for DeepMind, where they hope to work closely with Blizzard to create an AI that could one day potentially be the best StarCraft player in the world. And if you’re thinking, “Hey! Try playing a game against the AI on the hardest difficulty!” Well, as explained to me by StarCraft II multiplayer lead designer David Kim, the AI in the game cheats when put on the hardest difficulty. Look for that and more in an upcoming interview. DeepMind represents a whole new level of AI, and as Blizzard’s Frank Pierce mused during the opening ceremony, it could one day lead to a situation where the world’s greatest human player is matched up against the world’s greatest AI – the StarBot 5000.

With the release of Legacy of the Void last year, for many it might feel like the narrative side of StarCraft II is now a thing of the past. Not so! And although we didn’t get a new announcement along the lines of the recent, and very cool, Nova Covert Ops mission packs Blizzard aren’t done with adding new stuff to the game.

On the co-op side, we’re getting everyone’s favourite Russian-accented mutant Alexie Stukov, alongside some new missions. If you haven’t played Starcraft II co-op, then it’s something that you should definitely check out. It’s a lot less intimidating than the standard multiplayer side of things and offers up a taste of the campaign, with commanders that gain powerful abilities in maps designed for two players. Add in a level-up system, and new missions and commanders being added regularly it’s a part of the Starcraft II experience that we always find time to go back to.


Oh, and as an added bonus the fantastic day/night “Left2Die” co-op map from Wings of Liberty is being added to the co-op roster, redesigned to take advantage of the commanders and their special abilities.

Speaking of multiplayer there’s a new paid-for bit of content coming in the form of The War Chest, which will offer up rewards to players who StarCraft II regularly. Sure, it may sound like micro transactions but being ties to performance and the actual time you put into the game it does sound interesting. We didn’t get a chance to go hands on with it, so we’ll let the fine folks at Blizzard explain how it roughly works.

We’re introducing a new way to support the StarCraft II esports while also giving you access to all-new in-game goodies. We call it the “War Chest.” It’s a virtual treasure map that you’ll have the option to purchase, allowing you to earn new in-game content by playing your favorite StarCraft II game modes. The more you play, the more rewards you’ll earn. The War Chest will have its own seasons with new content to earn each time. We currently plan on having two seasons a year, with each season tied to major esport events. You’ll also be supporting esports, because a portion of the proceeds of each purchase goes directly into supporting Global eSports Initiatives.

Okay, time for the real deal.

Over the years I’ve watched many a StarCraft Esports game online, so be on hand to witness the World Championship Series felt a little bit special. There’s that word again! Nestled on the far end of the large Anaheim Convention Center was the StarCraft II Arena, a stadium within a building that was home to this year’s finals. Walking into it whilst it was still empty was an experience in and of itself, but when the matches began and the arena started filling up to capacity with an eager audience – I probably felt what all those people who go to sporting arenas to cheer on their teams feel. Awe.

Now when you compare competitive StarCraft II to other Esports it’s like comparing a game of chess to tic-tac toe. The sheer level of skill and what’s happening on-screen in terms of strategy and quick decision making is a next level. If you get it, it can be exhilarating. And if you don’t, it’s probably worth investing a bit of time learning how the game is played just to check what the fuss is all about. This is a game that has been played professionally for many years now, and the quality of matches never fails to impress.

For the 2016 World Championship Series, ByuN and Dark faced off in a Best of 7 series. We won’t spoil the outcome (even though you might already know it) so you can watch it for yourselves.