We chat to Raven and Treyarch about the most recent update to Call of Duty: Black Ops Cold War and Warzone by way of Season 3.
Inside Call of Duty: Black Ops Cold War and Warzone's Season 3
Hands-On Preview: Guild Wars 2 Closed Beta
Post by JeremyPencil @ 06:31pm 21/02/12 | Comments
AusGamers was lucky enough to take part in a closed beta for Guild Wars 2, one very sought after MMO that may threaten a few MMO crowns out there through smart, modern and sophisticated design. Read on for our thoughts on the closed beta...


Before I jump into this epic preview, a moment of full disclosure. Until the start of this beta weekend, I'd never touched Guild Wars. I have, however, touched a number of other MMOs and, in the case of World of Warcraft, it's the kind of touching that invariably breaches parole.

Having tired of the daily grind of WoW, I was keen to get stuck into something different and jumped at the chance to preview Guild Wars 2.

And on the first day, Alan created a hot girl in suspenders
First off, of course, is character creation. There were three races to choose from during the Beta – the feeble yet attractive Humans, the gigantic Norn and militaristic felines, the Charr. Now, I don't know about you, but I'll be damned if I'm going to spend hundreds of hours gawping at some buff dude's buttocks. Instead, I created a buxom young thing in a pretty waistcoat and stockings.

With race and profession chosen, it's time to flesh out the back story. The process is more BioWare than Blizzard, with the choices made during start-up having an impact far beyond the cosmetic level. For humans, choosing from Noble, Street Rat or Commoner backgrounds results in different story quests. 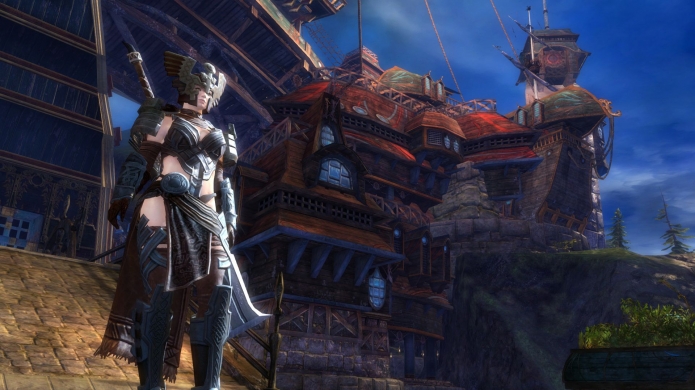 Game on!
Jumping into the starting zone, I was struck by how good the world looks – and the settings were set to low! Cranking things to maximum, I found myself staring into the distance, caught in a daydream while my allies were butchered around me. Returning to the task at-hand I steamed through the scripted events and burst into the huge wide world.

It didn't take long to discover one of the game's greatest strengths: dynamic quest discovery. Running around the world with careless abandon, I'd find myself wading into the middle of a pitched battle between the Seraph (the human guards) and a pack of filthy Centaur. More traditional quest-givers exist, too, and are marked on the map with a large heart-shaped icon. Talking to Scouts (marked by a telescope icon) uncovers more heart zones, but it's a lot more rewarding to take the time to explore the world and stumble across quests at your own pace.

These NPCs provide a huge variety of tasks. A beleaguered farmer might ask for help watering the crops, controlling pests and for protection from marauding Centaur, while an under-resourced Seraph might ask for help thinning out the numbers of the local bandit crew. Helping with any of these tasks fills a progress bar, so if you'd rather crack skulls than destroy bandit supplies, get that beating stick out and teach those dirty robbers a lesson in manners. Completion is automatic, with no need to trot back to the NPC to claim a reward, instead they'll send you mail with a cash donation inside.

As quests tended to take place in the vicinity of the NPC-in-distress there was very little fannying about running from one side of the map to the other to fetch a book for some forgettable town Wizard. It was a refreshing change and helped build immersion, unlike the menial chores WoW would put me through. I've just killed the Lich King and you want me to pick mushrooms? Get out of town! 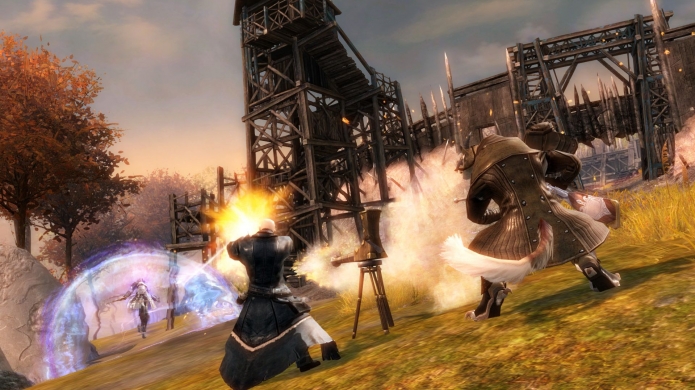 Combat Training
Combat in Guild Wars 2 is one of the most intuitive systems I've encountered. Using “1” through to “0” on the keyboard, the first five spots are reserved for weapon skills. Each weapon has its own unique skills which are unlocked through use. Main hand weapons have three skills, with off-hand weapons having two. Two-handed weapons use all five of these slots. Slot 6 is dedicated to healing and slots 7-9 are used for customisable skills. The “0” key is saved for Elite skills unlocked once your character hits level 30. After boosting myself up to level 30, I picked the Rampage Elite skill for my Ranger, which boosted several combat stats for him and his pet. Lasting 20 seconds and accompanied by an impressive flame effect on my character, this skill made a huge impact on combat, letting me rain down a turbo-charged volley of arrows on unsuspecting groups of Centaur.

This system works especially well when porting into World vs World zones where players are all equalised to level 80. In other games, jumping 70-odd levels ahead would be a crippling experience, with a suite of new spells and abilities to try and master. Here, it all makes sense and I jumped straight into the thick of it.

Where Worlds Collide
After spending a couple of hours in WvW, I was in love. While enemy players were few and far between, there was enough to do taking down rival supply caravans and depots to keep occupied. Teaming up with a fellow adventurer, we struck at these important supplies, taking down the camps one by one until we decided to reclaim a tower. This did not end well. Despite managing to fend off some vicious guards and a pack of wolves, we simply didn't have the firepower to destroy the tower gate. After three minutes of hacking at the gate with every weapon at our disposal we'd taken about 8% off its health bar and the guards respawned. Unprepared, we were savaged to death.

Changing tack, we decided to build a mighty siege weapon. After two hours of capturing enemy camps, I had just enough coin for a catapult. Buying the blue prints, it was then a simple matter of collecting “supply” from friendly depots and building the bastard. Ten minutes later, I'd built a mighty great catapult smack bang in the middle of my team's Keep. Only problem was, the effing thing had no wheels. The Siegemaster didn't offer refunds and I had two copper to my name, so trying one of the other siege engines wasn't an option. As the red mist descended, I tried to crush the filthy NPCs under a hundredweight of pebbles, but friendly fire isn't an option and they just laughed. This made me feel very sad.

Instance Carnage
As part of the Beta weekend, ArenaNet let us boost up to level 30 to enter Ascalon Catacombs, an instance that truly separates the men from the boys. The basic premise of the dungeon is to help stop a Norn Ranger stir up the remains of Ascalonian ghosts while she searches for a powerful artefact. Needless to say, remains are well and truly stirred and it's up to your band of brave adventurers to put them to rest by way of swords, sorcery and... boulders.

Ghostly duo Ralena and Vassar were, presumably, lovers and when fighting within a certain radius of each other, love hearts would spew forth, their damage would increase significantly and our feeble party would get decimated.

Fortunately, there were plenty of boulders dotted around the room. The knockback from lobbing these at the bosses kept them out of range of each other and, after several painful wipes, we finally downed them. As distressing as it was, it was a handy lesson in several key mechanics. First and most frequent, the “Downed” mechanic. Similar to Borderlands, it's a last ditch attempt to smash the enemy before dying. Each profession has its own downed abilities, from throwing dirt in enemy's eyes to blind them, to throwing down a protective circle to heal allies and damage baddies. Regardless of abilities, it's a tense few moments where life really does feel like it’s in the balance. 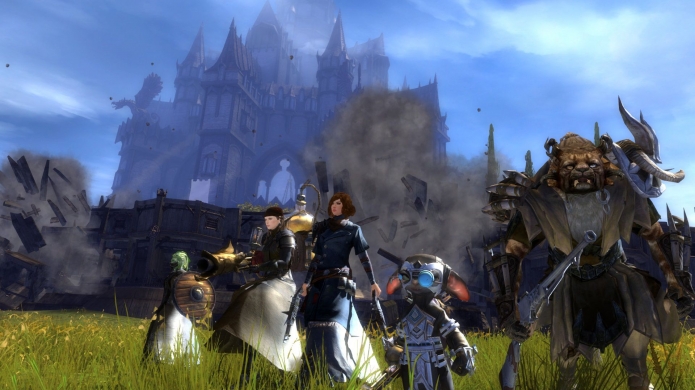 This encounter drove home the hugely different approach ArenaNet takes to class roles. There's no holy trinity of DPS/healer/tank here. Instead, each profession has their own individual heals, with most having the opportunity to lay down spells that benefit the whole party, whether it's damage reducing buffs, heals-over-time, or circles of warding to deflect ranged attacks and spells. Unfortunately, our party wasn't familiar with the array of spells and abilities we'd been granted at level 30 and were working as a group of partially-able individuals, with no real idea of our group synergies. With a better understanding of the mechanics, it's easy to imagine the potential to this approach, with more dynamic battles and no need to sit in trade chat spamming for a healer.

Final Thoughts
My first experience with the Guild Wars franchise was almost entirely positive – an impressive feat for a beta build. The network was rock solid, lag was minimal and there were hardly any issues. The bold direction they're taking with the game mechanics looks like it's going to pay off and the dynamic quests do a great job of reducing the grind-factor inherent in most MMOs. For this jaded WoW player, Guild Wars 2 is a real breath of fresh air. I can't wait to see more of it.

Read more about Guild Wars 2 on the game page - we've got the latest news, screenshots, videos, and more!
Tweet