You've known it was coming, but did you expect everything revealed?
In Kratos We Trust - God of War Rangarok Unveiled!
Razer Barracuda X Wireless Multi-Platform Gaming Headset Review
Review By Steve Farrelly @ 02:02pm 03/08/21

When you use the qualifier “utilitarian” it can come with two connotations: the idea of usefulness in an interchangeable way, or something not specialised or dedicated. At least to a single task.

In other words, a tool versus an instrument.

It’s funny how useful the word is from a meta state, but for the sake of being used here, it’s the best adjective to help you understand what Razer’s accessible wireless gaming effort in the Barracuda X is -- a less-specific gaming headset that moves beyond a desktop or console solution, instead treading in mobile and portable spaces not just for gaming. It’s by no means some catch-all audio solution to everything, but at the offered price point, and wireless to boot, it certainly puts its hand up as something worthy of investment if you have fingers in more than the one pie.

When you hear the name Razer, there’s no question that quality comes to mind. Even if there’s an abundance of content on the market for a given device -- it means the tech giant has a mind to cater to as many users and patrons as possible. What the Barracuda X does is flip the fishing script, instead reeling in users of its own with that “multi-platform” selling point on the box. This wireless headset is usable on any device with USB-A or USB-C inputs, and comes with its own wireless receiver. What this means for iPhone and iPad users, however, is that the Barracuda X already has a group of people it can’t placate, and so the other selling point, that being “mobile gaming” is limited to Android devices only, but as far as gating the i’s are the only ones who have it.

The other main issue outside of the i-device gating is the shape of the wireless USB-C dongle, which on many devices actually obstructs other ports. In the box you’ll also find a USB-A to USB-C extender, which is how I have the headset working; plugging the dongle into it. But that’s not an ideal solution, despite the extension coming with the device. It’s easy to see that the reasoning here was for the receiver to be less obstructive for Android mobiles, but this all highlights the oversight in not just settling for Bluetooth (even with the dongle) which would have been the best outcome here for all parties.

For the technophiles, here’s the official device specifics:As you can see there, the Barracuda comes with a few notable omissions, the biggest of which is no Synapse support, which also means no fancy lighting for the wannabe Cyberpunks out there (don’t worry, that’s us too). The idea here being the Barracuda X isn’t a bells and whistles device, but is rather pick-up-and-play first, with a mind of notional separation to its peers in both the same PUAP space. As well as in the same money down buy-in department, alongside the already-touted multi-platform side of the whole thing. So, you know, building a case for the positive. 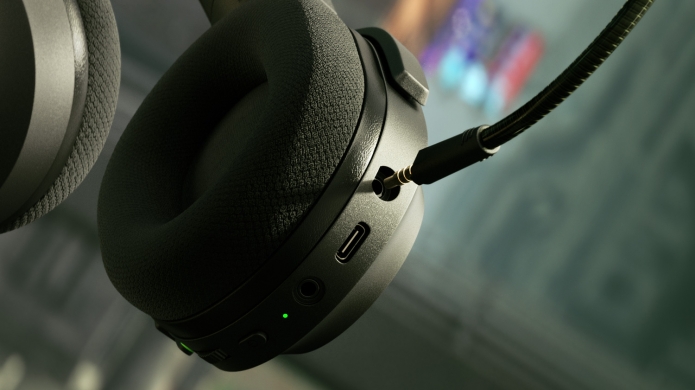 The trouble with pick-up-and-play when coming from a brand like Razer, which has out-of-the-box support in apps such as Synapse, Chroma Connect and the like, is that there’s an expectation. This is largely built around the UX being one of personalisation and control. Unfortunately here, there’s no EQ to play with, no LED support and no added extras to look forward to down the line. As you can see from the above, the headset is release-ready for Windows 10’s 7.1 surround offering and comes charged with Razer’s TriForce drivers, so you can go in with a level of trust over the want for control. That said, what you get here is a very decent mid-range audio outlay that’s less emphatic on the bass side, without feeling empty.

"Fast becoming a space where clarity is needed as more and more meetings take place on platforms such as Zoom with multiple people using multiple ranges of microphones...”


Switching between games (across all available platforms), calls and music and entertainment, it’s clear Razer is a step above in the audio world these days. And the TriForce drivers just delivered the goods when measured across all tests -- these included both Assassin’s Creed Valhalla and a recent re-firing of Red Dead Redemption 2, as both have some of the best spatial audio in the business. The end result wasn’t the sort of experience you get with Dolby Atmos in, say, a set of Sennheiser GSPs, but for what the Barracuda X is and the price point attached, the experience was still formidable.

The removable (thank you, Razer) mic isn’t the best when compared to some competitors, but it’s certainly not bad either. This became important as it wasn’t only used over Discord and in-game team chats, but also for work calls in the WFH environment we find ourselves in. Which is fast becoming a space where clarity is needed as more and more meetings take place on platforms such as Zoom with multiple people using multiple ranges of microphones. So to be clear (heh), I wouldn’t use the Barracuda X’s mic to record VO for my video content (that’s still left to my superior Razer Seiren X), but it’s definitely good enough to be heard in crowds of people trying to pretend as hard as they can they’re actually working from home.

In “going mobile”, so to speak, Razer’s pairing back of those ‘bells and whistles’ I’ve mentioned means the Barracuda X is less chunky than your usual stay-at-home desktop fare. These bad boys are designed to be used on-the-go and as such look fairly inconspicuous on the old noggin. In more recent times, the over ear headset has become as normal as bud-style headphones. The passive noise cancelling here is fine to use out in the wild with little breaking through, and that removable mic means these can go anywhere with you without it looking like you’re trying to land a plane while you order a coffee in the morning.

They’re also incredibly lightweight to the point of negligible; once you’ve had them on for the better part of an hour, you’ll likely forget you’ve got them on. This is helped by the 20 hours of continuous battery life on offer, and while there’s no indication of a need to recharge barring the power light flashing, it’s not super-relevant with that length of time anyway. Moreover, on top of being light and comfy, the durable plastic frame is both flexible and sturdy, so the likelihood of the Barracuda’s losing shape or breaking in general play is pretty unlikely.

The missed opportunity here is the lack of Bluetooth, which would have put the ‘Cuda X’s above and beyond. But for what you’re paying and getting as far as utilitarian usage goes, these are a very recommended headset. Specifically in a WFH environment and if you have a family that needs you to lock away sound while jumping between devices.