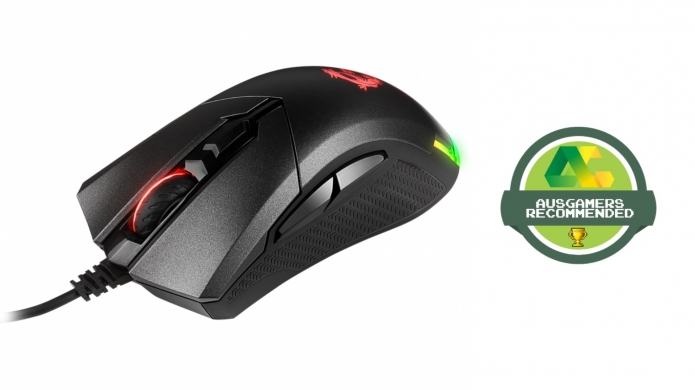 As far as peripherals go the mid-range gaming mouse is something of a saturated market, understandably so. The sub-$100 AUD price range is something of a budget sweet spot, and features more brands than you’ve probably heard of. Many of which are simply offering variations on a theme. Similar sensors, software support, build quality, additional features, shapes, sizes, and everything else. The MSI Clutch GM50 isn’t exactly an oasis in the desert, but it is a notable mid-range gaming mouse. And a decent performer to boot.

With a suite of features and hardware ticking all of the right boxes it presents a reasonable choice for those looking for a new gaming mouse without spending too much money. It’s also sturdy and features multiple lighting zones and an ergonomic shape that’s comfortable and lightweight -- that is, for those who prefer this style of grip. Throw in the option to sync with MSI’s own Mystic Light software in addition to other MSI Gaming interfaces there’s the added benefit of getting a mouse to match your potential motherboard and GPU.

Weighing in at around 117-grams, the shape and feel of the MSI Clutch GM50 is comfortable enough to use for extended periods. As per the intro its ergonomics are specifically tuned to right-handed grips, though that’s not really a bad thing in and of itself. All said and done it’s a classic shape and feel, though the ‘Dragon Scale Side Grips’ have a cheap plasticy touch that is neither dragon or scale-like. Rubberised grips aren’t all that uncommon in the mid-tier bracket, but it's not hard to see why MSI has opted for a single uniform body here. Even if the body is a little hard to the touch.

The MSI Clutch GM50 isn’t exactly an oasis in the desert, but it is a notable mid-range gaming mouse. And a decent performer to boot.


In terms of the real stuff, the click-feel is pretty good thanks to the Omron switches -- which feature a 20-million click lifespan. Naturally that’s not something we can easily test, but it’s a common feature in the style of Omron switch used here, so it’s an easy one to agree with. There are a few subtle hints of premium found through the MSI Clutch GM50 design too, the scroll-wheel is not only precise and sturdy but even features its own lighting flourish -- alongside the MSI logo and the RGB strip that runs along the base. The DPI switcher and the side-buttons all feel fine to use too -- without any imprecise spots.


As mentioned early on, MSI has ticked the right boxes in terms of the underlying hardware -- the Pixart PMW-3330 optical sensor is more than fine for most games. Tested across Call of Duty: Warzone, DOOM Eternal, and even the recently released Stronghold: Warlords the responsiveness is great and the on-board DPI sensitivity options to cycle through cover the spectrum pretty well. That said not getting a DPI on-screen prompt (at least that we could see) means playing by ear to get back to the one that feels best for you without going into software.

Outside of the overall feel that errs a little too much on the side of ‘hard plastic’ there’s a lot to like about this mid-range offering from MSI. Especially if you’re in the market to unify most of the branding in your build -- which is probably one of the key reasons you’d look at a MSI or Gigabyte or ASUS mouse over the more specialised peripheral brands out there. A decent if not spectacular offering, the MSI Clutch GM50 is a gaming mouse that’s worth its cost of entry.
Latest Comments
No comments currently exist. Be the first to comment!
You must be logged in to post a comment. Log in now!
Follow Us
Latest Reviews
More...
News Feed
Advertisement
Latest Threads
Log In
Create Account | Lost your password?