Announced at BlizzConline we dive into this new take on an class-ic, and chat to Blizzard as the Rogue officially joins Diablo IV.
Diablo 4 - Inside the Rogue Reveal
LG CX 48-inch 4K OLED TV Review
Review By KostaAndreadis @ 04:54pm 06/01/21 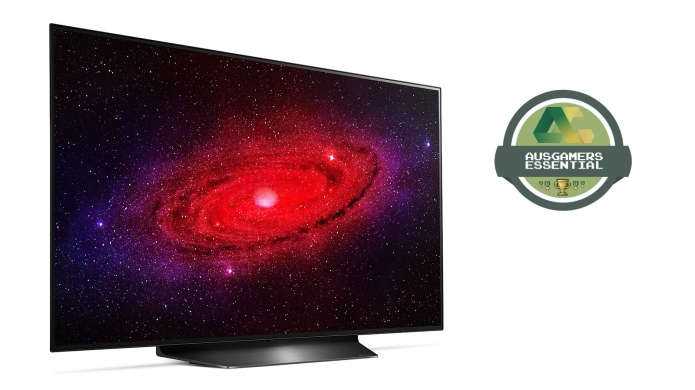 For a look at the latest LG OLED range from the perspective of both general entertainment and games check out our full review of the LG CX 65-inch 4K OLED TV. As we’ve now had the chance to test the LG CX 48-inch 4K OLED with the holy trinity that is the NVIDIA GeForce RTX 3090, PlayStation 5, and Xbox Series X this review focuses primarily on PC and next-gen console performance.

It has been the eternal question for some time now, in the PC space that is. When will we get to see gaming displays that feature OLED panels? A case of looking over to the TV space and seeing just how impressive OLED technology can be -- especially when paired-up with a 4K-capable console. Why OLED? Well that would come down to how the self-lit pixels result in blacks so deep that, yeah, that part of the display is basically ‘turned-off’. Throw in a rich colour-space and then top it all off with a crisp and clean 4K picture and it's one of those rare products where the premium price-point lives up to the promise.

Naturally there were those out there where waiting felt like that thing suckers do, so they went out and picked up a 55-inch LG OLED (previously the smallest option in the company’s OLED range) and then put that down on their desk… after making ample room of course. Or getting a bigger boat.

It has been the eternal question for some time now, in the PC space that is. When will we get to see gaming displays that feature OLED panels?


At CES last year, LG announced that it was planning to extend the OLED family of displays to include a far more desk-friendly 48-inch model -- which for context, still makes it a very large display (BFD) for PC gaming. The timing couldn’t have been better though, as late-2020 saw the release of the NVIDIA GeForce RTX 3080, AMD Radeon RX 6800 XT, and a couple of next-gen consoles in the form of the PlayStation 5 and Xbox Series X and slimline Xbox Series S.

And just like any great ‘how they met’ story the HDMI 2.1 capabilities of all the above took full advantage of the LG OLED range’s excellent game-focused features like 4K 120Hz support with HDR, G-Sync compatibility, AMD FreeSync Premium, Dolby Vision, and all of the smart stuff that has made the LG OLED something of the be-all end-all in the high-end TV space. 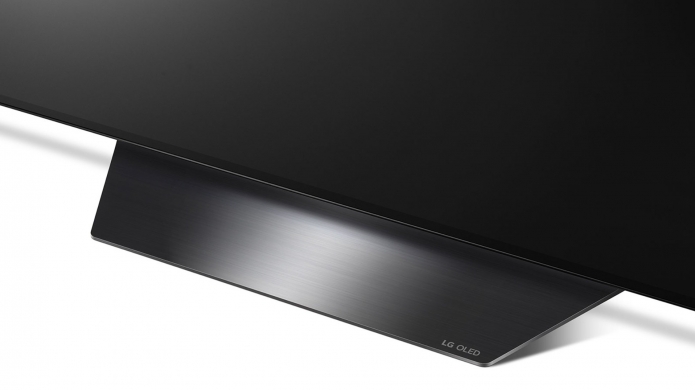 
There’s one feature that puts the new LG OLED range on par with many of the best displays primarily designed for game performance is its full support for VRR tech including NVIDIA G-Sync and AMD FreeSync, the former pairs nicely with any GeForce-powered PC or laptop and the latter can be found in Microsoft’s Xbox Series X.

The benefit of VRR is immediate, and can turn fluctuating performance and dips below the just about standard 60-fps into a smooth and issue-free experience. For example, with DLSS and cutting-edge real-time ray-tracing Cyberpunk 2077 enters the realm of ‘wow, that looks incredible’ when played on a GeForce RTX 3080 or RTX 3090. And thanks to G-Sync, seeing the frame-rate at 4K drop to the high or mid 50s, well, you don’t actually see that happening. You only realise it’s happening when you’re monitoring performance.

There’s one feature that puts the new LG OLED range on par with many of the best displays primarily designed for game performance is its full support for VRR tech including NVIDIA G-Sync and AMD FreeSync.


Elsewhere the 10-bit colour depth and support for the new HGiG HDR standard in addition to Dolby Vision and HDR10 means that up-to 4K 120fps is possible with or without HDR. On the Xbox Series X, Ori and the Will of the Wisps hits this target and looks incredible in the process. The same goes for DOOM Eternal on PC where full-fat 4K at 120fps is seemingly the norm on the RTX 3080.

At 48-inches this model is clearly massive when placed on a desk, though the bezel-free design, thin glass panel, and brushed chrome base keep it all as light and compact as can be. And stylish too. For couch gaming or Netflix-in’ the 48-inch size is still big, though in the pure TV space we’re now in the realm of the 65-inch becoming the standard for most living rooms. So, yeah, one might call this small.

As a hybrid though, say a display that will be used for PC games in addition to playing games on either the PS5 or Xbox Series X, the 48-inch size begins to make perfect sense. And really, thanks to HDMI 2.1 and all of the new graphics hardware that has hit the scene, the LG OLED is one of the best displays for games you can get. 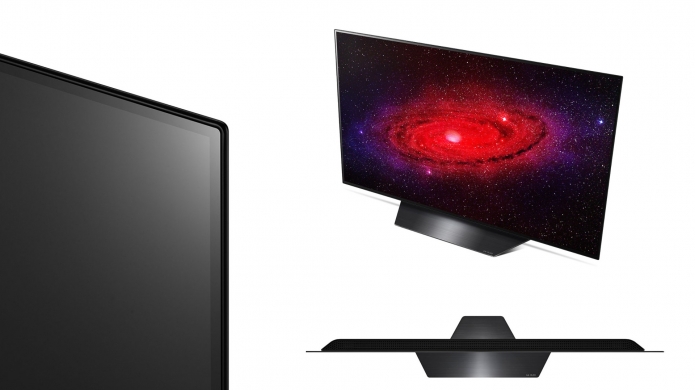 As to whether or not you can use your TV as a PC display, well that question has always really been about quality. Displaying something as seemingly simple as images and text on a website requires colour accuracy, proper contrast and brightness, sharpness, and limiting things like ghosting or light-bleed. Without getting technical, there’s a reason IPS-style panels have been the go-to in the PC space where the more commonly found in TVs VA-style panels vary widely in quality. With IPS you sacrifice contrast in order to maintain colour accuracy and sharpness, with VA you get deep blacks better suited for things like watching movies or playing games.

OLED though, is that best of both worlds scenario. Here simply doing the desktop dance is incredible - crisp, sharp, vibrant, and easy on the eyes thanks to the impressive calibration options found.


OLED though, is that best of both worlds scenario. Here simply doing the desktop dance is incredible - crisp, sharp, vibrant, and easy on the eyes thanks to the impressive calibration options found on the LG CX 48-inch. And the self-lit pixels allow, as per the link above, to turn the LG OLED into a true UltraWide gaming display. Paired with the latest in GeForce RTX 30 series graphics we were able to desktop and game in the UltraWide resolution of 3840x1600 -- where the black bars were essentially bezel in that they remained off whilst in the immersive UltraWide 21:9 aspect ratio.

Related: How to Turn Your LG 4K OLED TV into an Impressive UltraWide PC Display


There is one downside to OLED, and this is something we mentioned in our review of the 65-inch model. And that is, overall peak brightness is good but not HDR-1000 or the new HDR-1400 amazing found in high-end IPS panels. And by high-end we mean smaller displays that cost as much as LG’s 48-inch OLED. It’s not a deal-breaker by any stretch but as OLED brightness has improved over the years, other forms of LCD and LED panel-tech have done the same. 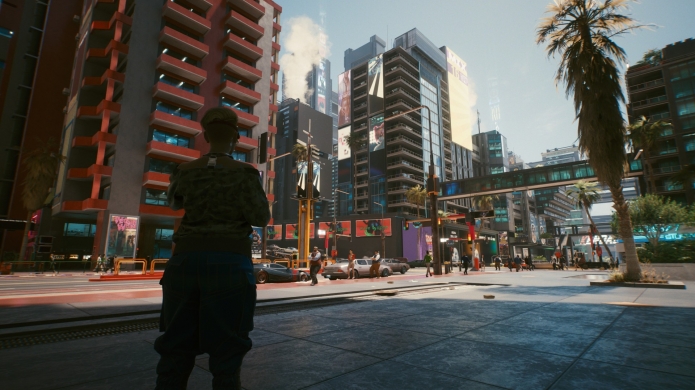 With a 4K Ultra-HD copy of Tenet or the newly remastered re-release of The Lord of the Rings trilogy, with Dolby Vision and the LG OLED ‘Filmmaker’ mode enabled the result is pure cinematic bliss. Same goes for original Netflix content which supports the impressive cinematic standard. Now, normally this is the sort of sentiment that is rarely if ever true when talking about ‘Game’ modes on modern 4K displays. Namely because in order to keep latency low most image processing needs to be turned off. The result there being an image that doesn’t quite hit the nuance found in other picture modes.

LG’s 48-inch OLED the Game Mode is on par with its cinematic and movie modes, and thanks to OLED being, well, OLED. You don’t lose out on the main features that make the image look as impressive as it does.


With LG’s 48-inch OLED the Game Mode is on par with its cinematic and movie modes, and thanks to OLED being, well, OLED. You don’t lose out on the main features that make the image look as impressive as it does. From deep contrast with true blacks through to impressive colour accuracy and 10-bit HDR modes, the LG OLED shines on modern game hardware thanks to the increased bandwidth of HDMI 2.1.

On the PlayStation 5, playing the Demon’s Souls remake, Spider Man: Miles Morales, Astro’s Playroom, or several other titles reinforces the difference that comes from not only a native 4K image but performance that now sits firmly in the 60-fps realm. Thanks to low-latency technology found in both the LG OLED and the Xbox Series X console playing Gears 5, the fast-paced platforming of Ori, or the dirt of Dirt 5 is responsive in ways console games rarely are -- and haven’t been since the days of wired controllers and big CRT-screens.

But really, even with all of its launch troubles, playing Cyberpunk 2077 on a high-end PC connected to LG’s 48-inch OLED with the latest NVIDIA graphics provides the sort of next-gen experience that truly feels like exactly that. A glimpse into the future and the next several years of PC and console gaming. The LG 48-inch OLED is simply put, incredible as a pure games display. Unmatched picture quality and cutting edge features all add up to create the delivery method for that next-level immersion that comes from a new generation of hardware. And whether you game on PC or console, the new LG OLED range has got you covered and then some.
Latest Comments
Link