Our massive round-table interview with the team at Respawn, going behind the scenes on the latest Apex update and finding out how the team keeps delivering the goods.
Apex Legends: Saviors - We Chat to the Team at Respawn
EPOS | Sennheiser GSP 600 Gaming Headset Series Review
Review By KostaAndreadis @ 01:11pm 07/09/20

Okay, so this one needs a little as they say in the movie biz – setting of the scene. A couple of months back the gaming audio division of Sennheiser made the decision to go it alone as premium audio company EPOS. A rogue’s gallery of audio wizards dedicated to creating solutions for gaming and enterprise. That is premium headsets with a focus on audio quality and clarity.

The result? A new name but the same impressive hardware. And in a refreshed and funky look for those wanting that option.

From a pure audio perspective, the EPOS | Sennheiser GSP 600 series presents the same audio excellence that has made the GSP line something to savour over the past few years. Where precise and crisp definition leads to an overall out of the box stereo balance perfectly suited for a dedicated audio interface like the EPOS | Sennheiser GSX 300, and/or software for EQ and surround sound tinkering when it comes to certain games.

From a pure audio perspective, the EPOS | Sennheiser GSP 600 series presents the same audio excellence that has made the GSP line something to savour over the past few years.


It’s not a requirement and is a plus in the sense that the versatile and detailed stereo sound means that the GSP 600 series can be tweaked or simply used “as is” for gaming, music, or media consumption. Unfortunately, the GSP 600 range doesn’t offer a simple out of the box solution for surround sound – so an audio interface or software is required on that front.


With the GSP 600s closed design, the frequency response is akin to what you might see referred to as HD-audio. And on that note, as we do with most gaming headsets, we initially tested the overall balance and response through lossless music playback across a range of genres (in this case, via the GSX 300). Obviously this is the sort of kit designed for playing Rainbow Six Siege or DOOM Eternal or World of Warcraft, but music playback offers the clearest baseline for how nuanced audio can be. The answer here being... very. Again, the GSP 600 series features a wide, crisp, and detailed range that carries over to games -- where all that extra detail can be heard in everything from sound effects to background music in cut-scenes. 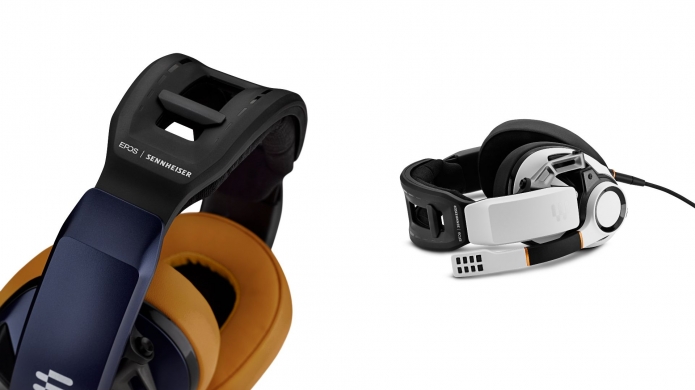 In terms of look and feel, like the current EPOS | Sennheiser range, the GSP 600 series has a rugged and bold style that is ‘gamer’. You could say that it goes a little too far, and that it’s a tad on the chunky and heavy side. It’s a bold mix of angles and material changes that sits alongside an overall fit that is comfortable and can be worn for an extended period. So yeah, the GSP 600 series is a lot more comfortable than it looks. But again, it’s still chunky.

You could say [the look] goes a little too far, and that it’s a tad on the chunky and heavy side.


Plus, the new GSP 601 and GSP 602 revisions add a dash of style and colour not present in the baseline black-with-red model.

The build quality is exceptional across the board too, and that carries over to the great cushiony feel of the cups and the headrest and even microphone. Which accounts for a lot of the chunky-ness. Even though the GSP design hasn’t changed all that much in recent years, we’re still of the opinion that microphones on gaming headsets should be detachable – especially when they’re versatile enough to work with something like a Nintendo Switch and can be taken on-the-go.

So yeah, the EPOS | Sennheiser GSP 600 series is versatile in that it can be connected to a Nintendo Switch (as mentioned above), as well as an Xbox One, PlayStation 5 or audio port on a laptop. That said, the rich and impressive stereo sound works best in ideal conditions, with the right hardware and/or software. The audio excellence that we’ve seen across the entire GSP range is present here – in a closed design that doesn’t feel muffled or restrained in any way. Bass response is warm, mid-range too, with highs crisp enough to offer a great gaming experience but leave enough room for tweaking to suit the right application.

The audio excellence that we’ve seen across the entire GSP range is present here – in a closed design that doesn’t feel muffled or restrained in any way.


Testing across a wide range of games – including more single-player offerings like Wasteland 3, Mafia: Definitive Edition, and Horizon Zero Dawn on PC – using the GSP 600 series has been great. And in terms of the GSP 601 and GSP 602 setting up EPOS for the future, we’re keen to see, and hear, what else the audio company has in store. For the moment though, the GSP 600 is a winner – though the drawbacks feel a lot more pronounced now than when it originally debuted.
Follow Us
Latest Reviews
More...
News Feed
Advertisement
Latest Threads
Log In
Create Account | Lost your password?