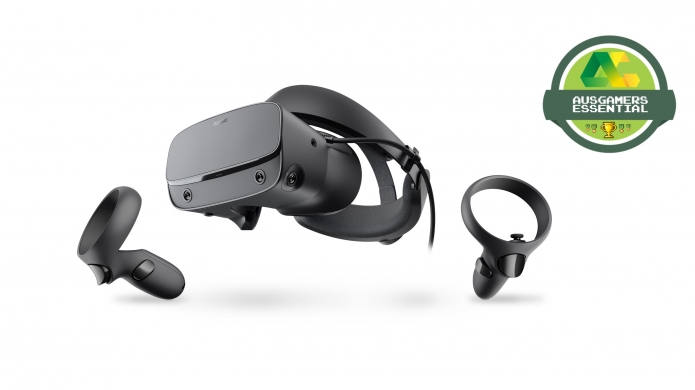 That scene first aired back in 1999, during the very first season of the now classic animated sci-fi comedy series. Outside of being funny and somewhat true of certain VR experiences, it also points to just how long the tech has been viewed as a sort of ‘within reach but still unattainable’ slice of the future. Always on the verge of becoming mainstream.

Of course, in recent years there’s been plenty of reasons for VR enthusiasts to step into the digital world of digital worlds. Starting with the release of the first commercial model of the Oculus Rift back in 2016, followed by the HTC Vive, Sony’s PlayStation VR, and even portable virtual goggles from Samsung that use smartphones for some rudimentary immersion.

The PC has of course been on the forefront of emerging VR tech, where advances have arrived at a steady clip. But mostly alongside the price-tag to match. The latest consumer ‘connect-to-a-PC’ version of the Oculus Rift, the Oculus Rift S, presents a different take.

Affordable, high-end VR that you can pair with a modern gaming PC or gaming laptop.

Reporting to You Live... From Inside the Computer 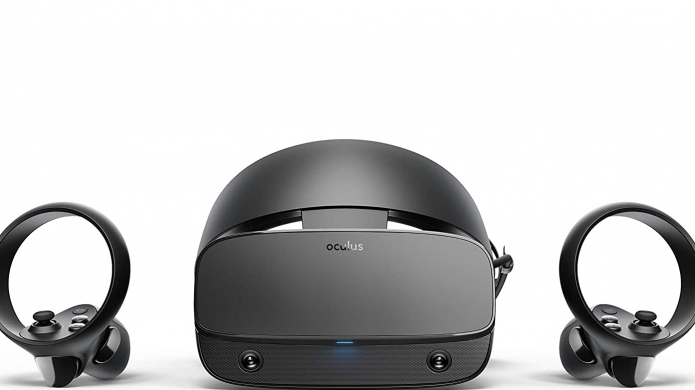 That ‘affordable’ distinction is important because thanks to impressive design features that include a single lengthy cable (that splits into video and USB on the PC side) and accurate inside-out tracking. The Oculus Rift S presents cutting-edge VR that can follow you across the desert of the real after you unplug from the many virtual worlds it offers. In less Morpheus-like terms, it’s portable.

"The latest consumer ‘connect-to-a-PC’ version of the Oculus Rift, the Oculus Rift S, presents a different take. Affordable, high-end VR that you can pair with a modern gaming PC or gaming laptop."


In keeping the costs of the Oculus Rift S down, in the realm of less-than half of some of the competition, Oculus no longer sits on the absolute top or Mt. VR Tech. In terms of high-end display features that is. It’s a move that makes sense for the Facebook owned property – mainstream and a wider appeal has always been the goal. Not only from a market-speak standpoint but in hitting the right level of saturation that allow for games like Asgard’s Wrath, Phantom Covert Ops, Beat Saber, and Half-Life Alyx to make sense.

Testing out VR for the first time, with the right sort of experience and the right tools like the Rift S offers with Oculus Touch Controllers and proprietary inside-out tracking -- is a special moment. The sort of thing that can convince you of the technology’s ‘here to stay’ and Neo-style ‘woah’ benefits. 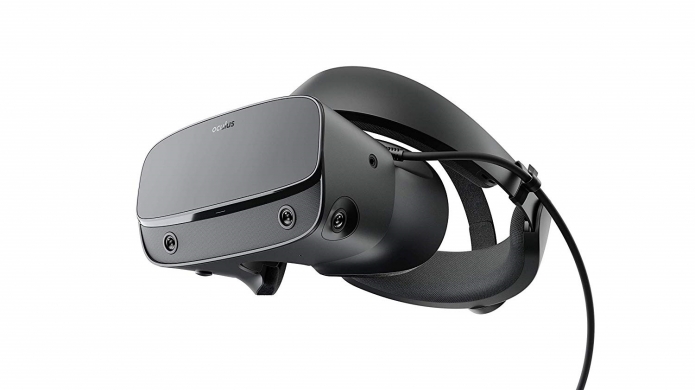 
The Rift S’s 1280 x 1440 pixels per eye resolution and move away from an AMOLED display may not sound like an evolutionary leap over the first Oculus Rift, but it is an improvement. The lack of the screen-door effect (which is the pixel-grid like image you can sometimes see in VR) and a modest bump in resolution offers up a crisper and cleaner overall image. The trade-off though comes in the form of not all that great contrast, with darker scenes carrying that LCD-greyish look that isn’t ideal.

"The lack of the screen-door effect (which is the pixel-grid like image you can sometimes see in VR) and a modest bump in resolution offers up a crisper and cleaner overall image."


Where the Oculus Rift S goes from modest incremental change to impressive leap forward though is with the quality of life features born from a few key areas of innovation. The first of these is inside-out tracking, where cameras on the headset point in all directions. This removes the need for setting up sensors and creating a defined VR-space. Setting up where you are as a play space is as easy as firing up the Oculus software, letting it know where the ground is and then pointing with a Touch Controller to draw a playable space outline.

It’s this sort of tech, accurate tracking mixed with tactile responsiveness of the Oculus Touch Controllers that feels essential for VR moving forward. Input that can accurately track hand movement, grip, and finger positioning is akin to injecting another one of your senses into what many have only experienced in a stationary or vision-only like presentation a couple of years ago. In fact, if Oculus can figure out how to make a headset with inside-out tracking fully wireless (that also connects to a PC), that would feel like the final piece of the puzzle clicking into place. 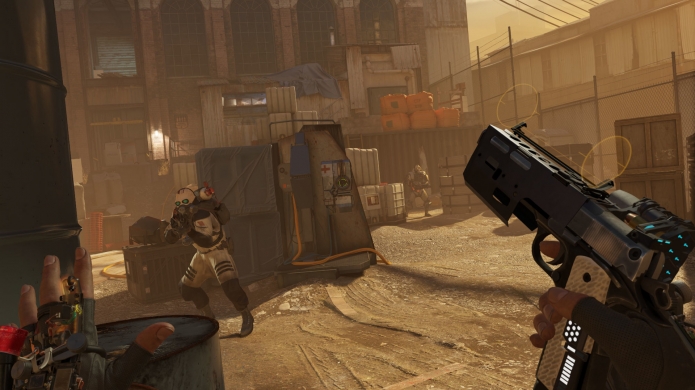 Even though it’s a PC peripheral of sorts, a VR headset is in many ways viewed as a console-like platform – it has its own infrastructure, apps, games, and other experiences. This is true of the Oculus Rift S, which in addition to working flawlessly with Steam (tested across several titles including Rez Infinite, I Expect You to Die, DOOM VFR, ADR1FT, the aforementioned Half-Life: Alyx, and Valve’s own The Lab) there’s the dedicated Oculus software. Which includes a virtual home to decorate, a storefront, interface tools, and virtual guides you can peruse.

The Oculus setup software and opening VR experience that takes full advantage of the Oculus Touch Controllers and head-tracking is wonderful too – evoking retro and modern gaming through the guise of Short-Circuit, Stranger Things, and pure ‘80s Spielberg-like wonder.

An amazing first step that leads into popular (sold separately of-course) first-party Oculus Studio offerings like the epic RPG Asgard’s Wrath, the beat-driven booty shaking of Dance Central and Beat Saber, the brilliant stealth action of Phantom Covert Ops, the vibrant fantasy of Journey of the Gods, and the sci-fi cinematic thrills of Lone Echo. 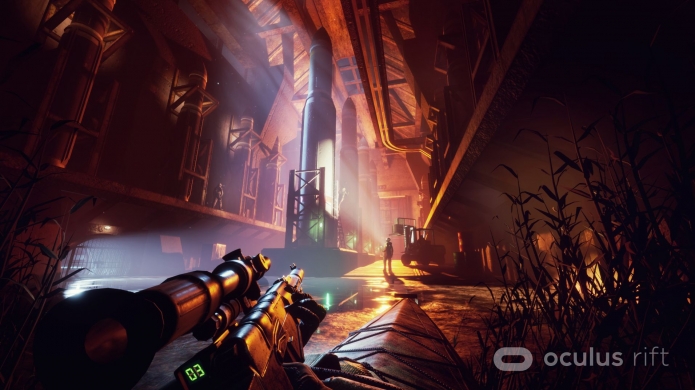 Now, most of those are exclusive to Oculus hardware – something that has been a point of contention to the wider VR community. But in many ways, it’s just another version of the same story we see with console exclusivity or storefront exclusivity in the case of PC gaming.

"It’s this sort of tech, accurate tracking mixed with tactile responsiveness of the Oculus Touch Controllers that feels essential for VR moving forward."


There’s also a sense or consensus that VR lacks a killer app, a game that truly sells the platform as something more than regular gaming. Pretty silly, but the sentiment is honest. And in 2020 it’s one that is just-about irrelevant. Not only due to the latest Half-Life game being a VR-only affair, but the list of great VR titles and experiences that have emerged in recent years is substantial. A great example to use is Vader Immortal, a three-episode narrative-driven VR experience created by ILM for the Oculus Rift set in the Star Wars universe. With accurate room-tracking, touch controls, and excellent performance on anything from a GeForce 1660 Ti to a GeForce RTX 2080, the initial impression you get is that you’re a part of an elaborate Disneyland ride. 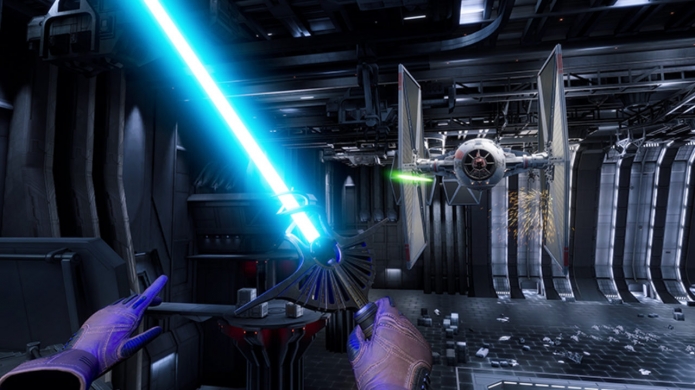 You’re wielding a lightsaber, you’re deflecting Stormtrooper blaster fire, you’re using the Force. You’re part of a story, you’re truly in the ride. If it were a traditional game release, it might be labelled an interactive movie – the long-awaited Rebel Assault III perhaps. VR has always had that theme-park sense of immersion, but in a complete package like the Oculus Rift S that immersion can now translate to engaging games, experiences, educational tools, and more. For every Vader Immortal there’s a Half-Life: Alyx or Phantom Covert Ops -- something that could only exist in VR.

Affordability, inside-out tracking, touch controllers, it all adds up. Alongside the comfortable, light, and portable headset the Oculus Rift S is a bold statement for the future of VR – one not simply limited to high-end products paired with equally high-end rigs. Is it perfect? No, and to be honest the 80Hz refresh rate can occasionally make it feel like your PC is struggling when it isn’t. But much like the search for that one killer app, it’s moot when the features and games and apps available add up to a level of immersion and engagement that feels unlike anything else.

As Amy might have said, “Wow, I could swear I was in a Star Wars movie”.
Latest Comments
No comments currently exist. Be the first to comment!
Commenting has been locked for this item.
Follow Us
Latest Reviews
More...
News Feed
Advertisement
Latest Threads
Log In
Create Account | Lost your password?