We sit down with Ripple Effect to talk about Battlefield Portal, the mode that brings classic maps, modes, and factions from 1942, Bad Company 2, and Battlefield 3
Battlefield 2042 Interview - Inside Battlefield Portal
Razer Huntsman Tournament Edition Review
Review By nachosjustice @ 04:44pm 11/11/19 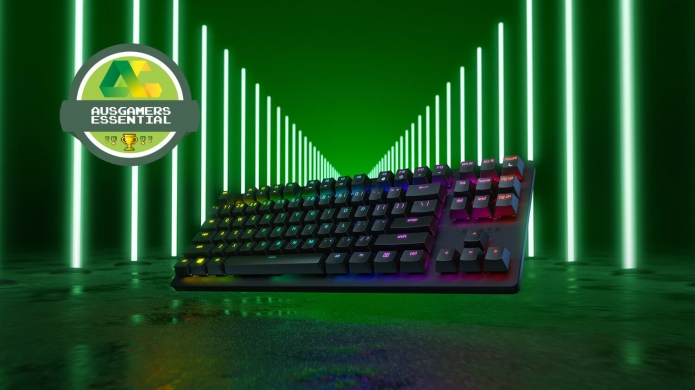 I’m not writing this Razer Huntsman Tournament Edition review on that particular keyboard. It’s not that it’s impossible, it’s just that it’s brutally unforgiving when it comes to day-to-day computing (more so, for a writer).

Instead, I’m banging out this keyboard review on my current go-to keyboard: the HyperX Alloy Origins (review coming soon). This everyday-use keyboard, a Logitech G Pro tenkeyless, and my Logitech G-something-or-rather – old enough that I’ve forgotten the model name, and broken enough that it’s been tossed – are my two muscle-memory references.

Far be it from me to tangent, but that recently RIP’d Logitech full-size keyboard was rendered useless after the death of the ‘I’ key. As someone who predominantly plays shooters on my PC, I expected any combination of WSAD, Q and E, Shift, (left) Ctrl or spacebar to conk out before the barely used ‘I’ key gave up the ghost(ing). Perhaps that’s more telling of how much I write myself into things than anything else. Hmm. 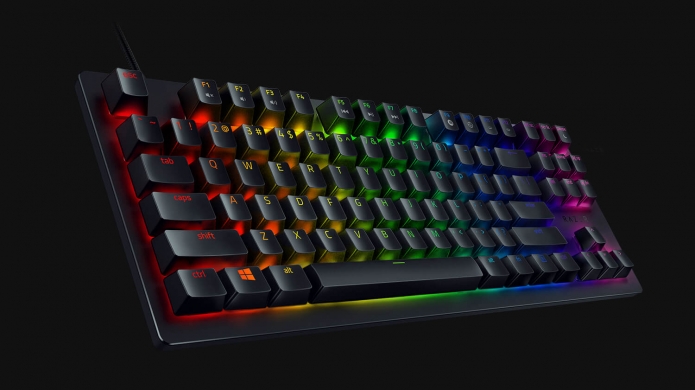 Tangents aside, muscle memory, as it turns out, is particularly important in the race to increasingly lower actuation points. The actuation distance of the HyperX Alloy Origins is a decent 1.8mm. The Logitech G Pro has a respectable 1.5mm. And the Razer Huntsman TE blows those comparison ’boards out of the water with a 1.0mm actuation care of optical switches.

This is legit nuts, so much so that the blessing of Razer’s tenkeyless keyboard is a detachable USB-C cable that lets me effortlessly shift from full-sized day-to-day keyboard (Alloy Origins) to Razer Huntsman TE for gaming. This Razer keyboard has such a short actuation point that I learned I have a lazy habit of dangling my digits on keys.

With every other keyboard, this has rarely ever resulted in a keystroke, and likely helped with shorter actuation type to pre-prepped keystroking. With the Razer Huntsman TE, though, it picks up ev-er-y-thing. Part of me was tempted to type up this review on the TE and post it warts and all as an example of just how much of a finger minefield it is to perform basic writing tasks compared to my other reference keyboards. 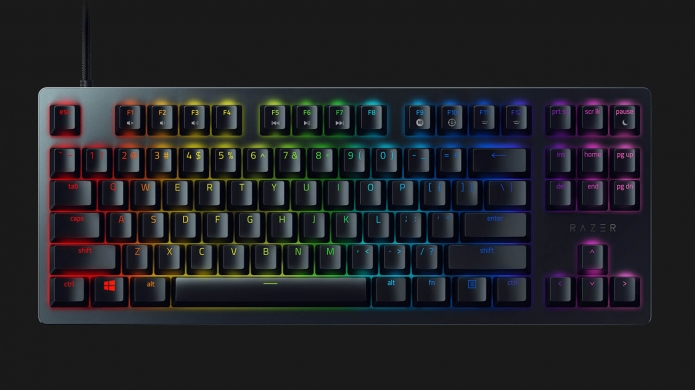 It may read like bad news, but it’s definitely intended as closer to ‘compliment’ than the ‘backhanded’ part. The impossibly short actuation point was a big part of the appeal for me when I put my hand up to review the TE. This is because, like Emil Blonsky in The Incredible Hulk (I know, freshest of references), I lament that the more adept I get at competitive shooters, I’m still battling ageing reaction times.

“This Razer keyboard has such a short actuation point that I learned I have a lazy habit of dangling my digits on keys.”

These peripherals help let this 35-year-old gamer keep his edge against (hopefully) budget-poor, reflex-rich young guns. The point of that latest tangent is to highlight that a 1.0mm actuation point sounds fantastic on paper. It becomes a smidge more complicated, though, when you have to basically learn new keyboard habits. 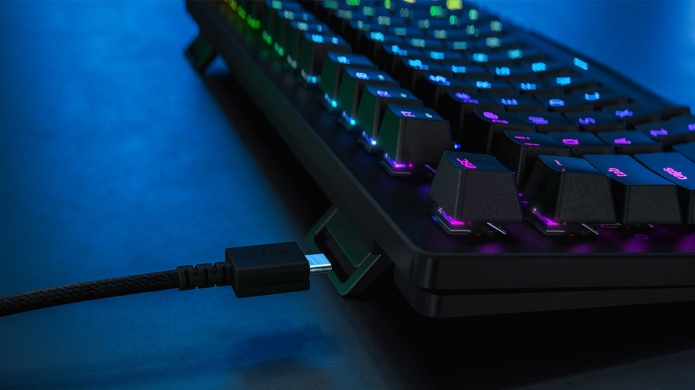 
The reality is I had to pay conscious attention to where my fingers were resting whenever I played a game. Initially, I trained myself to keep my fingers hovering just above the keys, but that quickly proved to be a logical paradox. After all, there’s no point in wanting to take advantage of a 1.0mm actuation point if you intend on slowing that actuation by creating addition distance between keys and fingers.

What I then had to learn (and struggled to do so at times) was having a gentler resting touch on the keyboard. During early rounds of Battlefield V, I thought something was wrong with the game because I felt like I was drifting to the side, only to realise that a wayward resting digit on ‘A’ or ‘D’ was the actuating culprit.

The same was true of the many hours I tested Call of Duty: Modern Warfare’s multiplayer. That initial hurdle of having to unlearn and relearn habits to match a lighter actuation point eventually paid off, though. I don’t know about the rest of you but, for me, probably more instances of “bullshit!” than I’d care to admit are attributable to me being slow on the draw: things like prone-ing to get behind cover, or hitting crouch to slide under someone’s aim. 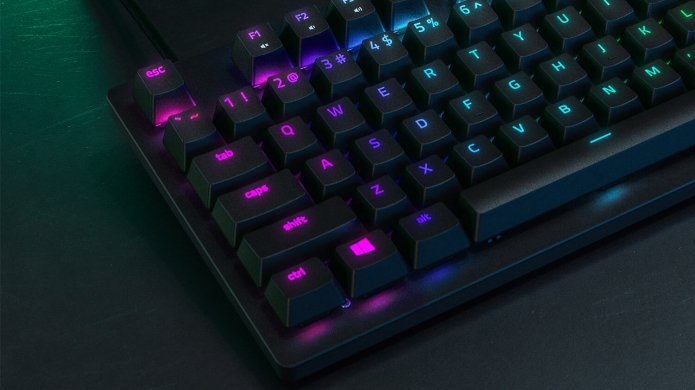 The TE is a game-changer in this regard. More often than not, I was able to slide or dive to safety in both Battlefield V and Modern Warfare. It made me cockier with A-D-A-D dancing in gunfights, and even led to some heinously disrespectful plays where I closed the gap on firing enemies for front-on melee kills.

If you can adapt to it, the TE pays off dividends. There’s technically even more gains to be found if you can break the habit of fully depressing the key. That said – and I’m labouring the point because this is important – it’s a piece of ultimately optional piece of kit for anyone who already owns a halfway decent mechanical keyboard, mostly because of how frustrating it is to use for everyday tasks.

“The TE is a game-changer... More often than not, I was able to slide or dive to safety in both Battlefield V and Modern Warfare. It made me cockier with A-D-A-D dancing in gunfights... ”


It doesn’t help that the keys feel on the cheaper side, despite the thermoplastic that’s supposed to offer a “premium feel” and the technology that sits beneath them. The TE keys are most comparable to the Logitech G Pro, but the latter tenkeyless keyboard’s keys, though plastic, feel studier. Both of the tenkeyless ’boards are beaten out by the HyperX Alloy Origins for everyday use, and not just because the HyperX option has a keypad (though that definitely helps). 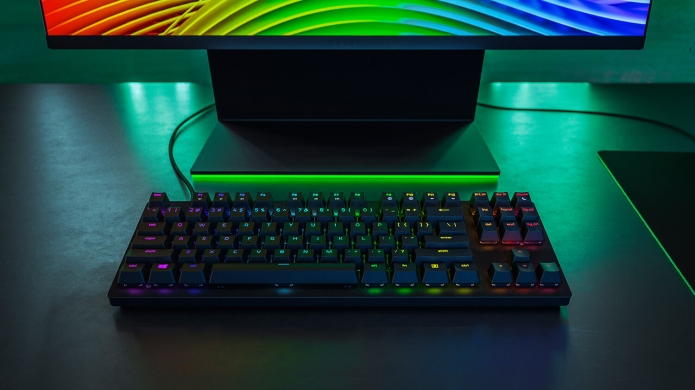 The onboard memory of the TE is a nice touch, particularly given how it remembers me disabling the Windows key between connections, and the lightweight small form factor make it a cinch to transport to LANs.

It may be entirely optional, but the Razer Huntsman Tournament Edition is a keyboard that I instantly miss when I forget to plug it in during a session of competitive gaming. The increasingly minimal readjustment to the shorter actuation points are absolutely worth the initial pains of erroneous keystrokes, but this is one of those gaming peripherals that really is only built for gaming and not everyday use.
Follow Us
Latest Reviews
More...
News Feed
Advertisement
Latest Threads
Log In
Create Account | Lost your password?