I’m an endless tinkerer when it comes to desktop PCs. But that’s tinkering on the software side and the more basic roles of swapping out RAM, GPU, and trying to squeeze in one more hard drive. It wasn’t until a couple of years ago that I fully built my first desktop PC from top to bottom. All this time I was worried about potentially breaking things. As it turns out, they’re more like LEGO sets for adults than intimidating bundles of electrical components. Given my enduring love of LEGO (yes, I still collect), you’d really think I would’ve gotten around to this sooner rather than later.

The build was one I’d been saving years for: a $4K, 4K build. But there was, well, an incident. I foolishly bought a Corsair 900D case, which PCPartPicker incorrectly labelled as “Full Tower”. This case is actually beyond Full Tower, Stephen King’s The Dark Tower, and Dreamworld’s Tower of Terror. The damn thing didn’t fit under my boardroom desk, so I had to reconfigure ev-er-y-thing to accommodate it. 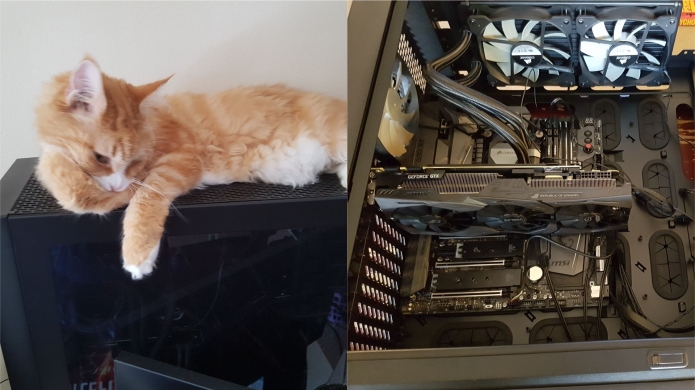 Worse still, there was a design flaw around the PCIe ports that necessitated the use of a tiny (but included) L-bend Phillips head screwdriver for securing my GPU. I only ever managed to get one screw in for my massive ASUS GeForce GTX 1080 Ti, which never really felt right. So when esteemed editor Kosta Andreadis offered me the chance to take a new significantly smaller case for a spin in the form of the new Fractal Design Vector RS, well, I jumped at the task.

University taught me to loathe postmodernism with a burning passion, which may be why I’ve long felt like more of a form-follows-function modernist kinda guy. In terms of PC gear, this means I care less about the look of something than how it performs. That’s why two desktops ago I bought an Antec Lanboy, mainly because those two two-mounted handles made it oh-so-easy to lug that beast around, whether locally for a clean or upgrade, or to a mate’s for a LAN.

What the Lanboy lacked in visual appeal, it more than made up for in easy access, even if those hard-drive mounting cables broke too frequently. Fast-forward to the 900D, and while certainly a step up in the looks department, I enjoyed the extra space inside for manoeuvring my gangly hands.

Okay, so that long-winded lead-up is there to amplify the fact that I was blown away by the Fractal Design Vector RS when I unboxed it. As you can see by the shots supplied, it’s a looker. And on that front, in addition to being a hardware review this is also a tale of a person who Once Upon a Time did not care for looks and shiny things, who then woke up one morning after eating porridge at a gingerbread castle to find out they were wrong all along. 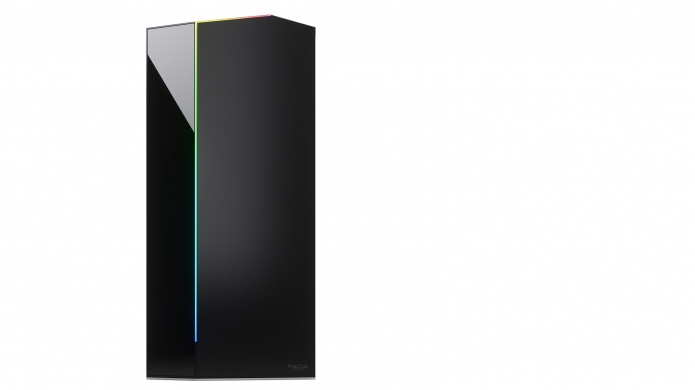 Off the bat, I could tell that the top-and-side dark-tint tempered glass (I reviewed the Vector RS Dark Tempered Glass model) was not only stylish and sleek but was going to make the PC components contained within look all kinds of sexy. Admittedly, while still being dark enough to hide my terrible cable management. Such was its beauty, I was tempted to forego the top-mounted Celsius S36 closed-loop CPU Water Cooling System that Fractal Design also provided and leave the top unchanged. Tempted, sure, but I opted for the additional cooling. My long-time fascination with liquid cooling and T-1000 liquid metal will never change.

“I could tell right away that the top-and-side dark-tint tempered glass was not only stylish and sleek, but was going to make the PC components contained within look all kinds of sexy.”


The rest of the case is well designed in an understated way in terms of its exterior, drawing on the sort of architecture you might find in a fancy hotel or scandanavian museum of arts and weirdo music. The angles on top and front provide that iconic first-glance look, while also leaving logical ridges for optional RGB lighting. I’m not usually one to step aboard the RGB train, but I’m definitely a fan of the strips of lighting that are more subtle than night-time cityscape and neon purples and pinks that Kosta seems to enjoy.

On the RGB front, with everything packed inside, I now have a new appreciation for the lighting on my GPU (which is, these days, is the commanding NVIDIA GTX 2080 Super) and motherboard, which are muted thanks to the tinted tempered glass.


The Vector RS is heavier than I was expecting from a mid-tower case, though admittedly, nowhere near as cumbersome as the 900D that permanently marked my desk. This weight is due to a heavy emphasis on steel, both inside and out, that helps to make the Vector RS feel suitably robust and durable - like a T-800. Assuming technology doesn’t change for the next century or so, I could potentially pass it down to future heirs to the Lawrence kingdom. Currently a few odds and ends and some furniture.

There’s even more metal in my build because I swapped out the tempered glass top panel, which also adds extra internal plastic – to complement the smattering of top, front, and side plastic on the outside – in the form of the (admittedly optional) high-airflow ventilated panel. Speaking of airflow, it’s hard to get over how well this case dampens noise, particularly the fans, even with extras added as part of the Celsius S36.

Inside the case, the PSU is kept separate in its own tunnel-like container, which I thought I’d hate, but is incredibly easy to access with the right panel removed. Around that same side is where you’ll find a dedicated panel for fan power, which means you don’t have to run fan cables directly to the mobo. There’s also some neat Velcro straps to incentivise even lazy folks like me to have better cable management.

For those who are more dedicated to cable management than I clearly am, the Vector RS also has 19 tie-down points and 23mm of cable routing space. I may be a free-the-cables fiend, but I do appreciate the conveniently placed rubber pass-through ports for managing the bare basics. The modular design also gives you a bunch of options for internal layout tweaks to garner more space.

Speaking of more space, I did fall down a, retrospectively, illogical rabbit hole of trying to secure the Celsius S36. Long story short, the top screw-mounting grill was flipped around the wrong way in the manual, which meant my slavish devotion to following instructions led to a lot of wasted time.

“This weight is due to a heavy emphasis on steel, both inside and out, that helps to make the Vector RS feel suitably robust and durable.”


It did let me test just how much of the internals can be deconstructed and, as it turns out, is quite a lot when it comes to the hard-drive bays. That said, when I got to the final screw that would have completely removed the vertical bay, it was so tight it couldn’t be removed by hand or drill. That screw is now officially stripped, which means it and the hard-drive bay are permanent fixtures in the case.

Eventually, it dawned on me that I should just ignore the instructions and reverse the top grill, so I got to put everything back together. It didn’t take long at all. Initially, I’d also positioned my hard drives at the very bottom of the case, but didn’t like how the drive bays were clashing with my cabling configuration. I shifted them to the top, but that got in the way of the Celsius S36. Eventually, they ended up in the middle.

Normally this extra time would have frustrated me, but it’s so easy to quickly shift the bays, even with the optional small screw intended for keeping things still during transportation. I have a 3.5-inch hard drive and two 2.5-inch SSDs that are happily sitting between the mix of power, SATA, cooler and fan cabling. I could comfortably add a couple more, too, without impacting my haphazard cabling.

Connecting everything else went smoothly, except for the fact that my MSI Z360 Godlike motherboard has an anti-closed-loop-cooling design with two CPU power ports right at the top. This means I’ve had to remove the third Celsius S36 fan which, frustratingly, would be exhausting heat right above the CPU.

My only other gripe is there’s absolutely no space for an optical drive. Yes, I’m still one of those old-school people who prefers to have a drive that I use a few times a year. Outside of that, this mid-tower case still manages to be roomy enough for me to comfortably tinker with, whilst also impressing in terms of quietness, cooling, and it’s striking design.
Latest Comments
Link