Mud, dirt, water, logs, slush and dust is the playground of the MX rider and there is plenty of spatter to be had with this latest incarnation of the MX vs ATV franchise.

The game is distinctly divided between our two wheel two stroke mini beasts of speed, the MX and MX Lite motor cross bikes and the less bone crunching, but sometimes equally uncontrollable ATV’s including the strange UTV’s and a variety of sport trucks. 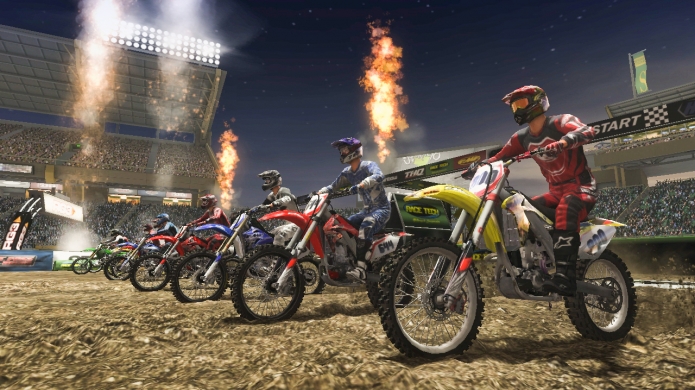 The split is most noticeable in control mechanisms, with the bikes requiring more thought in rider weight control, and allowing for an almost unlimited amount of trick manoeuvres, if you can handle the default controls, which take some getting used to. Particularly the titular ‘Reflex’ and ‘Wreck Avoidance’ moves, required to save a rider before a certain fall, it just seems natural to move the incorrect analogue stick. A bit of practice however will see the day right.

Still on controls, the tracks of MX vs ATV consist of lots of jumps, ruts, mud, rivers, log piles and plenty of other obstacles designed to keep your machine bouncing around as much as possible. In a race this translates to minimal time with the drive wheels on the ground. This in turn adds significantly to the task of simply keeping your man on the track, heading in the direction required. Thankfully, again, with plenty of practice (and perhaps starting on the Rookie level) your rider will be standing upon the podium, usually in front of a poorly rendered female handing him a trophy.

One thing MX vs ATV is not short of is race modes; in a Motocareer, players will need to master 19 series of events, including the (hilarious) Omnicross, described as the “... ultimate test of human mettle”, there is also an Arcade mode, as well as extensive Multiplayer options for both Lan, online and split screen.

The Multiplayer is important, for some will not find the AI drivers in this game perhaps up to par. Many a time during a race, the AI drivers will simply forget to make a turn, driving instead into ‘vehicle reset’ oblivion, and sometimes causing significant pile-ups of other riders. 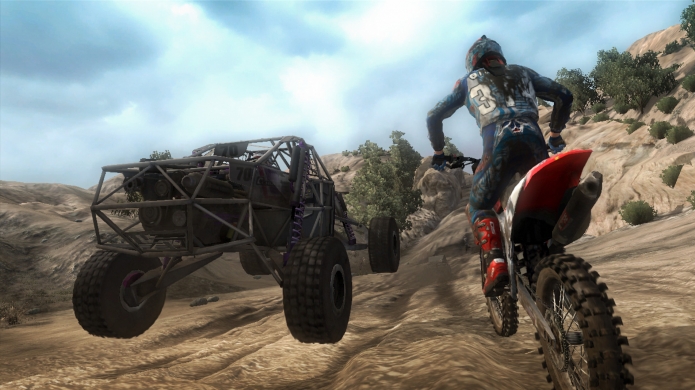 But herein lays the kicker, dopey race AI is actually a lot of fun. The mayhem of games such as Motorstorm, or the more grounded, yet surprisingly fallible driving skills of some of AI drivers in many CodeMasters developed games, provide some of the more memorable moments in the racing genre.

Whilst they have a significant popularity and following, games such as Gran Turismo, with their perfect, unmoveable driving lines for AI opponents, are, well, just boring. Here there is white knuckle entertainment to be had, even on your lonesome, with bone crunching, or panel denting action from start to finish.

There are rough edges; the off track detection is a little harsh, with the bike or ATV getting reset for taking the slightest of shortcuts, which is annoying since many of the non-circuit style course promote a variety of lines to take. 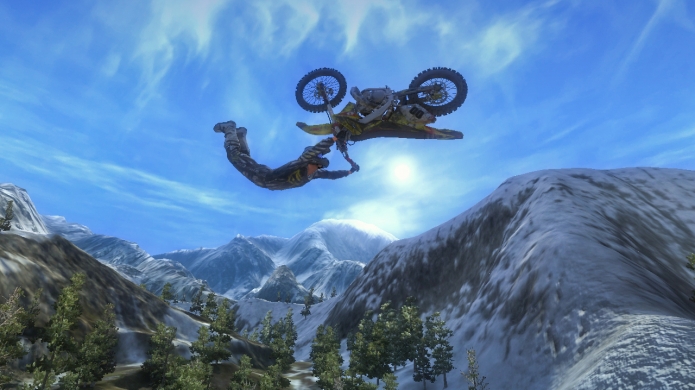 Some races are just too long, a function of the significantly large environments, which are similar in size to those presented in Motorstorm for example, but with generally slower (more realistic) vehicle speeds, take that much longer to get around.

Conversely mini-events such as the Eliminator, seem too short. Some consistency of event duration would have worked better here; the Motorcareer option would have felt more like a career if this had been the case.

Still there is fun to be had with the longer and shorter diversions. This is especially so in the free ride open expanse areas, where challenges such as hill climbs or crazy jump action make for a welcome relief from some of the chiropractor visit inducing racing as part of the more traditional areas of th game.

The game looks and sounds acceptable for a title of this ilk in 2010, each vehicle will carve a tire path through the terrain, seemingly with minimal effect on subsequent laps. Dirt spatters riders, damage modelling is satisfactory, though visually only and all in all this is a solid, racing title that sits firmly on the fence between all out video-game racing madness and the simulation end of the spectrum.
Follow Us
Latest Reviews
More...
News Feed
Advertisement
Latest Threads
Log In
Create Account | Lost your password?