We've taken Kratos and Atreus on an almighty journey in sequel territory. Is it as good as the OG?
Realms Apart | Our In-Depth God of War Ragnarök Review
Watch This - First Gameplay Trailer for Warhammer 40,000: Rogue Trader is an Ultimate Tease
Post by Steve Farrelly @ 12:12pm 18/11/22 | 0 Comments In the best possible way a tease can be taken, that is. And in addition to today's gameplay trailer, developer Owlcat Games has also opened the game up for Wishlisting on Steam and GOG, revealing alongside that full details on its impressive Collector's Edition for the game.

If you're a fan of the grimdark worlds of Warhammer 40,000 this is must watch stuff.

Warhammer 40,000: Rogue Trader is the first cRPG set in the legendary grim darkness of the far future of Warhammer 40,000. Set to be released on PC and consoles, the game features turn-based combat and is being produced in close collaboration with Games Workshop.

As you can see from the trailer, Rogue Trader will take players on a sprawling adventure across multiple biomes featuring unique and engaging enemies. In addition to the above, we also have official details on the game's CE. 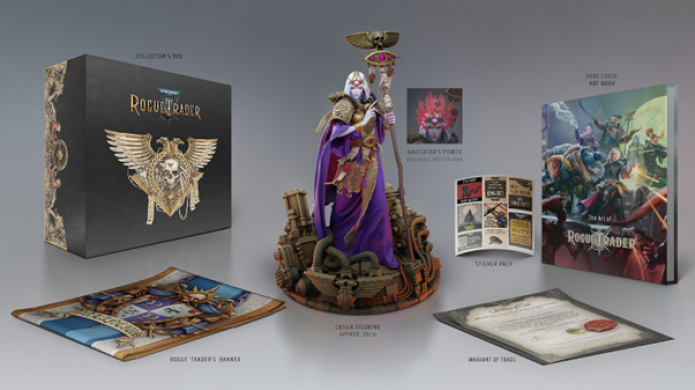 The fabulous Warhammer 40,000: Rogue Trader collector’s box revealed includes an 8-inch painted figure of Navigator Cassia Orsellio, hardcover art book, Warrant of Trade that you can personalize with your name, Rogue Trader banner, and sticker pack. Together with physical items you will receive a digital version of the game in a selected store with the pack of various in-game goodies and access to Alpha and Beta versions. The Collector’s Edition is available for pre-order via owlcat.games’ website.
The Collector’s Edition contents:

And if you're SUPER KEEN the studio is also offering punters to buy into a Founders Edition of the game early, which you can learn more about here, but essentially gives you alpha and beta access and will net a series of unique rewards for early adopters.