You've known it was coming, but did you expect everything revealed?
In Kratos We Trust - God of War Rangarok Unveiled!
Call of Duty: Vanguard's WWII Era Multiplayer Revealed Alongside Beta Details
Post by KostaAndreadis @ 06:34pm 08/09/21 | 0 Comments This year's Call of Duty: Vanguard sees a return to the World War II era with an ambitious four-theatre campaign and a focus on the history of what we now call Special Forces. Of course, all of that is filtered through the bombastic spectacle that is Call of Duty. Today comes our first look at the Multiplayer, alongside info on the Beta which *checks notes* is kicking off this weekend.

First up though is the multiplayer trailer, which dials up the Tarantino vibe and over-the-top action you'd expect from CoD. So yeah, if you were expecting a slower and more measured pace befitting of the 1940s, well, this is very much in line with Modern Warfare.

Become the original Special Forces in Vanguard’s intense, adrenaline-fueled Multiplayer. From the map and mode offerings on day one to advanced weapon customization, to all-new social and Combat Pacing features and a deeper focus on Operators.

Sixteen maps for traditional core play, four maps for 2v2 Gunfights, and one Champion Hill experience — this is what players can expect on day one at launch for Vanguard’s Multiplayer. These maps take place across a wide variety of different global environments and are ready to host an abundance of game modes.

Outside of Champion Hill — a fast and frenetic tournament for Solo, Duos, and Trios — Vanguard will introduce another new game mode: Patrol. Based on Hardpoint, this objective-based mode features a scoring zone in near-constant motion; if Operators want to rack up points for their team, they should keep up and move around the map within this Patrol point.

These modes are in addition to the classic offerings one would expect in Call of Duty. Modes like Team Deathmatch, Kill Confirmed, Domination, and Search & Destroy are just some of the ones returning with Vanguard.


As per above this is running on the same engine that powered 2019’s Call of Duty: Modern Warfare so it definitely looks like a step up over Call of Duty: WWII visually. From a setting perspective it's great to see the globe-trotting side of the campaign make it's way to the multiplayer. Stay tuned for more on the multiplayer (our impressions basically) as we got to go hands-on with the Beta during a recent preview session. It was very cool.

And speaking of the Beta, it kicks off this weekend - starting on PlayStation 5 with Early Access given to those who've pre-ordered. Next weekend opens up Early Access to Xbox and PC in addition to Open Beta action for everyone. 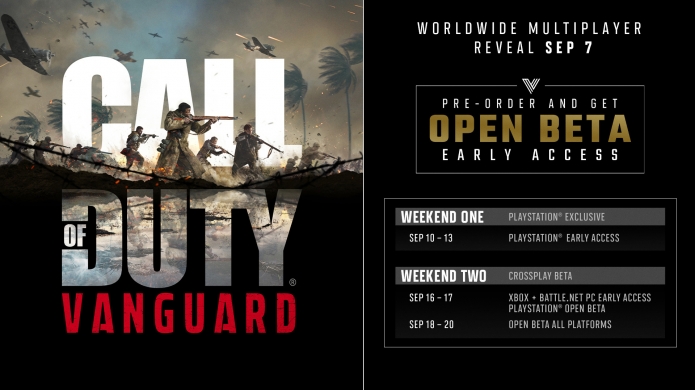 
The Beta is set to include three Vanguard maps: Hotel Royal, Red Star, and Gavutu in addition to Team Deathmatch, Domination, Kill Confirmed, and the new Patrol game modes. For info on the beta and the reveal -- head here.