Gothic, dark, and fairy tale-like in nature, albeit one with a scope and breadth that feels wholly original -- even though its pieces might not be.
Lost in Random Review - A Dark and Memorable Fairy Tale
Magic The Gathering’s Dungeons & Dragons Crossover Brings the Fire… Dragon Fire
Post by KostaAndreadis @ 03:43pm 01/07/21 | 0 Comments Magic: The Gathering’s latest set is called Adventures In the Forgotten Realms which, if you know a thing or two about realms and magic and wizards with flowing beards with wands that can shoot all manner of orbs at unsuspecting (or suspecting) foes, means a Dungeons & Dragons crossover! A unique set of cards that delves into both Magic and classic D&D, making it something fans of either 12-sided dice or collectible bits of cardboard should definitely be excited for.

And speaking of cards there’s one we’re exclusively revealing today thanks to the rulebook-following folks at Wizards of the Coast.

But, before we get to that, it’s worth highlighting that this new Dungeons & Dragons-themed set features both of those things… dungeons and dragons. With the latter playing a major role in the new set, with named Dragons appearing as Mythic-quality cards based on some of the most iconic fire breathers from D&D lore as well as those that cannot be named. That is, lower rarity cards and Dragons that weren’t given a name but instead treated like prisoners and assigned a colour... like Red Dragon.

On the other end of the (dragon)scale is Tiamat the Dragon God.

Which brings us to our card reveal Dragon’s Disciple, an uncommon card but a very cool-looking Human Monk with the following description (and wonderful art by Lucas Graciano). 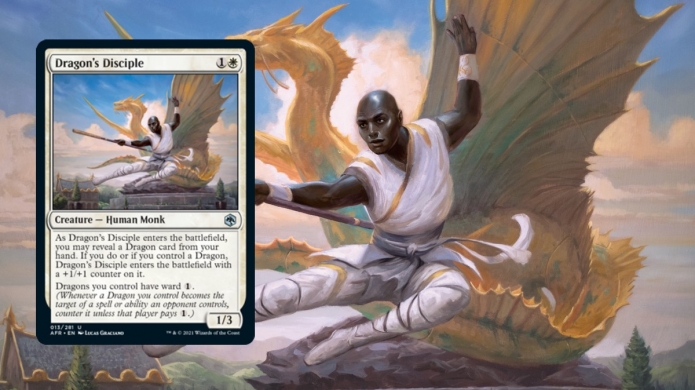 Dragons you control have ward 1


Although having a Monk power-up based on their relationship and kinship with Dragons is very cool, the addition of Ward means that whenever a Dragon of yours (that said... can you ever really own a Dragon?) is targeted the player will have to pay the Cost. 1 Mana.

And when you factor in that you can have multiple Dragon’s Disciple cards in play, that is multiple Monks, the effect is taking an already scary prospect (going up against a Dragon-heavy deck) and making it, well, scarier.

Like any great card it’s one that has multiple layers, but here the addition of Dungeons & Dragons lore brings rich characters and backstory to the fore -- where the interplay between the figurative Disciple and Dragon is born from the team at WOTC really digging into the mechanics, lore, role-playing characters, and history of Dungeons & Dragons.

Drawing on the long and rich history of Dungeons & Dragons, this first-ever collaboration is even introducing new Dungeon cards that play-off a new keyword that injects a bit of D&D adventure. Very cool.

Magic: The Gathering’s Adventures In the Forgotten Realms is set to release July 23. Head Here For More Info.