We sit down with Ripple Effect to talk about Battlefield Portal, the mode that brings classic maps, modes, and factions from 1942, Bad Company 2, and Battlefield 3
Battlefield 2042 Interview - Inside Battlefield Portal
Did Bethesda Just Reveal The Elder Scrolls 6 Location in the Starfield Teaser?
Post by KostaAndreadis @ 02:36pm 16/06/21 | 0 Comments Okay so this is impressive, simply for the fact that someone on Reddit picked up what could be the most subtle Easter Egg we've ever seen. That is a tiny scratching on the interior of the space-ship, as seen in the Starfield teaser, looking like a distinct region in Tamriel. As in... the iconic world in which The Elder Scolls VI takes place.

With the location being Hammerfell and High Rock, with the former being the dry arid home of the Redguards and the latter the fertile home of the Bretons. Areas not seen in a mainline modern Elder Scrolls outside of The Elder Scrolls Online. 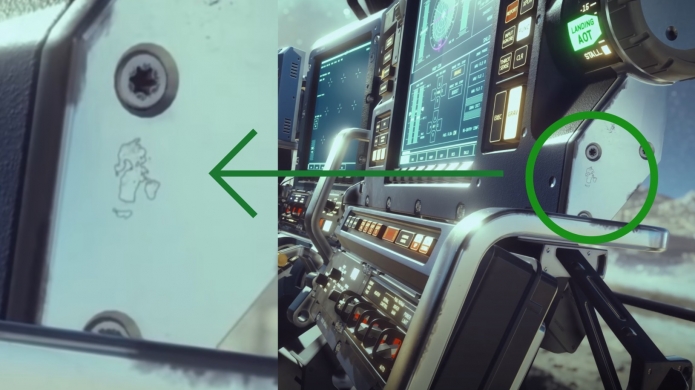 And here's the Hammerfell and High Rock section from a map of Tamriel. It looks pretty conclusive, and definitely in the shape of a map -- specifically a region in Tamriel. So yeah, this could very well be the location of The Elder Scrolls VI and Bethesda put that in the Starfield teaser guessing no one would spot it. Apart from Reddit user 'Huhwtfbleh', who when asked how many times he watched the trailer responded with "I do not want to answer this".

Epic levels of Easter Egg sleuthing here on the account that you can only make out the outline when viewing the 4K version of the Starfield reveal. Also, the Hammerfell and High Rock combo sounds like an awesome setting.