With Marcin Iwinski, co-founder of CD Projekt Red taking full ownership for the state of Cyberpunk 2077 at launch (specifically on consoles) noting that it was his and the board's decision to launch the game in an unfinished state. And not that of the wider team. He notes that due to the complexity of the game's world it simply didn't come together as intended in the days leading up to launch.

The statement, made via video, can be seen in full below.

The studio has also posted a written version with more detail -- which you can find here.

On the issue of consoles it writes.

The main culprit was having to constantly improve our in-game streaming system for old-gen consoles. Streaming is responsible for “feeding” the engine with what you see on screen, as well as the game mechanics. Since the city is so packed and the disk bandwidth of old-gen consoles is what it is, this is something that constantly challenged us.


On the issue of review code for consoles not being sent ahead of launch.

We started sending out PC review keys to start the review process in the first week of December. Come December 10th, launch day, we had a really good start with PC reviews, and while it’s not perfect, this is a version of the game we were, and still are, very proud of. When it comes to the review process for consoles, at the same time PC codes were sent out we were still working hard to improve the quality of the game on old-gen consoles. Every extra day that we worked on the day zero update brought visible improvement — that’s why we started sending console codes for reviews on the 8th December, which was later than we had planned.


It's an open apology and a renewed promise that the studio is working to improve the game -- a process that will take many months. Looking ahead, the following roadmap was also showcased. 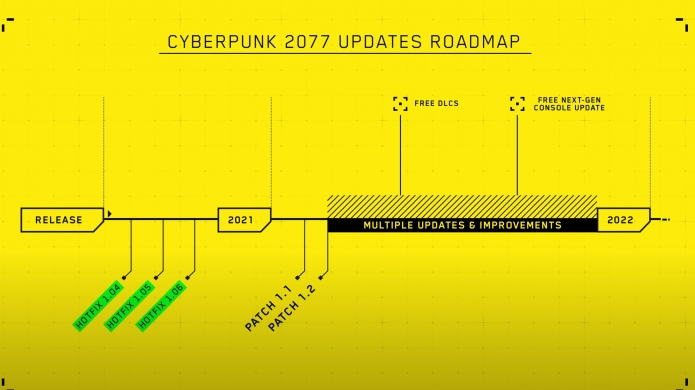 Which confirms a few things -- first the major patched promised last year are still on track, with an additional Hotfix ahead of the first big one arriving in the next 10 days. In addition to this Free DLC will arrive this year alongside continued improvements and updates, including the PlayStation 5 and Xbox Series X next-gen update in the second half of the year.