Here’s, as a young hotshot ad guy might say, is the sizzle reel.

Yeah, the NVIDIA GeForce RTX 3080 is the new flagship model and will ship with a whopping 8,704 CUDA Cores, 10 GB GDDR6X (developed exclusively with Micron), and will be out September 17 for $699 USD/$1,139 AUD. The big surprise was the Ampere-based GPU using Samsung 8nm process as opposed to 7nm -- but we won't pretend to know enough about the difference to try and break that down. But, 1.9x the performance over the 2080 Ti at a much cheaper entry point is nothing short of impressive. 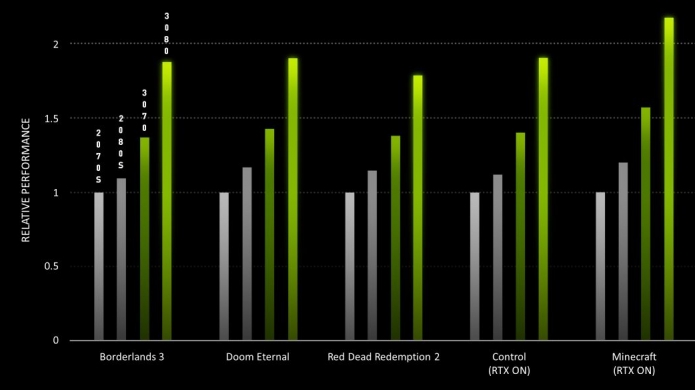 Granted the above performance chart comes from NVIDIA and probably represents some of the best-case scenarios, but with PS5 and Xbox Series X both supporting real-time ray-tracing, the advances made in the RT and Tensor Cores and the AI-based DLSS rendering of the RTX series and second-generation RTX 30 series will no doubt keep the PC-platform right there on the forefront of PC game graphics. As per the video above more RT and Tensor, err, stuff means vastly improved ray-tracing starting from the RTX 3070 ($499 USD/~$809 AUD).

Not only that but the new cooling design for the Founders Edition not only looks futuristic but will be over three times quieter than the current 20-series and run 30-degrees cooler. Yeah, impressive. 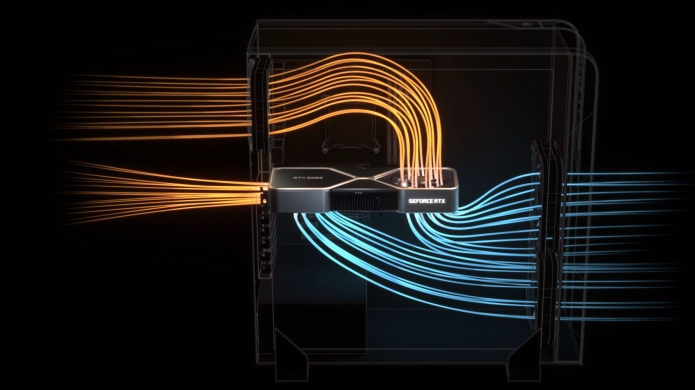 All three were revealed as part of a GeForce Special Event livestream hosted by company co-founder and CEO Jensen Huang; where we got a deep dive into the reflective pools of the next-generation of GeForce, including cutting edge NVIDIA Broadcast technology, NVIDIA Reflex (which uses AI technology to lower input delay). In the lead-up to the event NVIDIA has been celebrating the past 21-years of gaming, and technological breakthroughs – with a focus on seminal titles and releases.

Something that carries through to the RTX 30 series as some of the focus was placed on perhaps the most anticipated game of the year, Cyberpunk 2077. A game that will support RTX features like real-time ray-traced reflections, shadows, lighting, and DLSS 2.0 rendering, features of the new 30-series that will see a sizeable boost over the current Turing-based RTX 20 line-up (which includes the formidable RTX 2080 Ti). And be cheaper to boot.

Plus, Call of Duty Black Ops Cold War is getting ray-tracing and DLSS support.

With the flagship 3080 series offering up to 2x the RTX performance in current RTX On games like Remedy’s Control, Minecraft with RTX, and others – no doubt it’s a true generational leap. As with each new generation of NVIDIA graphics the RTX 30 series is based on the company’s latest Ampere architecture, with an improved power-to-performance ratio over Turing.

Or watch the full stream below: