Announced at BlizzConline we dive into this new take on an class-ic, and chat to Blizzard as the Rogue officially joins Diablo IV.
Diablo 4 - Inside the Rogue Reveal
Star Wars Squadrons Revealed - An 'Authentic Piloting Experience' with VR Support
Post by KostaAndreadis @ 11:43am 16/06/20 | 1 Comments Overnight we got the first "in-engine" trailer for EA and Motive's Star Wars Squadrons, the latest space flight Star Wars thing in a line-up that includes the seminal duo of Tie Fighter and Rogue Squadron. There's a lot to live up to for sure, and even though we didn't get an extended look at gameplay (that's coming later this week) we now know a lot about the latest adventure set in a galaxy far, far, away.

What we know is that the game will feature 5v5 multiplayer "strategic first-person" dogfights in addition to a campaign that takes place towards the end of the Galactic Civil War. That is right after the events of Star Wars: Return of the Jedi. With players being able to take control of pilots in both the New Republic and the Empire this original story is teased in the trailer above.

Through the story, players will learn what it means to be a pilot as they battle from the alternating perspectives of two customizable pilots, one serving in the New Republic’s heroic Vanguard Squadron, while the other fights for the Galactic Empire’s fearsome Titan Squadron. The authentic story features a diverse cast of original characters, as well as some cameos from familiar faces in the Star Wars galaxy.


“We created this game for every Star Wars fan who has ever dreamt about soaring across the galaxy in their favorite starfighter,” said Ian Frazier, Creative Director, Motive Studios. “Through the collaboration of the teams at Motive and Lucasfilm, we’ve been able to create a high-fidelity starfighter experience with an authentic storyline that invites Star Wars fans to explore never-before-seen corners of the galaxy in their own ship."

On the multiplayer front so far two modes have been outlined; Fleet Battles, where squadrons are tasked with taking down the opposing flagship, and Dogfights, which are self-explanatory. Take down as many enemy ships as possible. Two locations that will serve as a backdrop to the action are Yavin Prime (as seen in the very first film) and the moon of Galitan (as seen, well, here). As for the ships, well, all your favourites are here - including a couple of new ones. 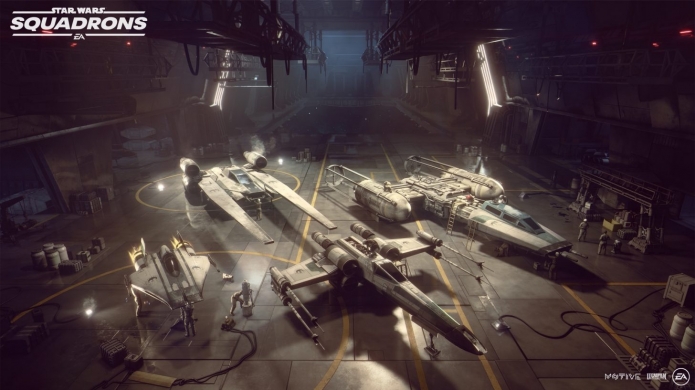 For those wondering Squadrons will feature "rich cosmetic and gameplay customisation options" but all rewards and bonuses will be earned solely through gameplay. Lessons learned and all that. Interestingly, as seen in Star Wars Battlefront II performance will be improved with things like new shields and weapons in addition to the cosmetic-only stuff like cockpit trinkets and pilot outfits.

Star Wars Squadrons is headed to PlayStation 4, Xbox One, PC (via Origin, Steam and the Epic Games Store) with support for Virtual Reality (VR) on PlayStation 4 and PC on October 2, 2020. And in addition to that cross-play support has been confirmed to be there on day one.