Hideo Kojima's latest looks wonderful running on a modern PC rig, and it's still as weird and strange and alluring as ever.
Death Stranding on PC - A Stunning Odyssey
Report - NVIDIA's GeForce RTX 3080 Ti is a 4K Beast
Post by KostaAndreadis @ 03:08pm 12/05/20 | 0 Comments

Okay, so this is all based on rumour, leaked specs, and various sources - but if the informaion is to be believed (and YouTube channel Moore's Law is Dead has been accurate in the past) then the upcoming flagship NVIDIA GeForce RTX 3080 Ti is an absolute monster of a GPU. Providing an incredible 50% performance boost for games running in 4K.

With the report detailing that even for unoptimised games that figure will be at least 40%. Until we get the official announcement it's all but confirmed that NVIDIA's next-generation of RTX graphics cards will be running on the company's new Ampere architecture. As the successor to 2018's Turing and the GeForce RTX 2080 Ti - the PCIe 4.0 standard, 7nm technology, and improved memory speeds are all coming together to present something that is destined to be a 4K powerhouse. That is all games running at 4K 60 at a minimum - with ray-tracing enabled. More on that in a moment. 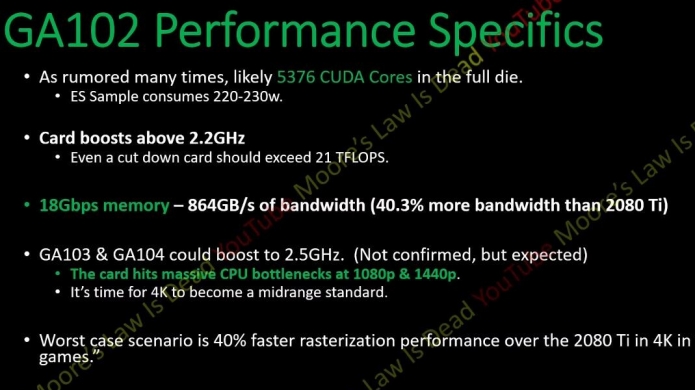 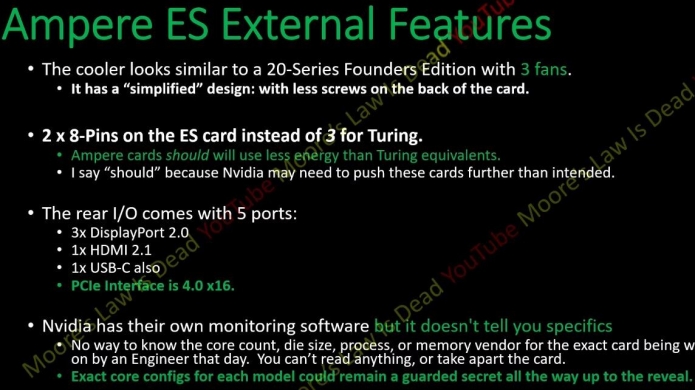 As per above the GA102 GPU inside the 3080 Ti is reported to boost above 2.2 GHz, with a staggering 5376 CUDA cores, and all running with a lower power draw than the 2080 Ti. Interestingly the leaks state that the Founders Edition of the card will come equipped with three fans - one more than the 2080 Ti's two. Also, HDMI 2.1. Very cool.

But, 21 Teraflops. That's unheard of in desktop graphics. Plus, several sources have been reporting that RTX or real-time ray-tracing performance hits for the RTX 30 series is expected to be minimal - thanks to Ampere's ability to handle RT calculation at 4-times the speed. With some going as far to say that a potential RTX 3060 could deliver RTX On performance equivalent to an RTX 2080 Ti.

With NVIDIA set to unveil Ampere later this week, but in its larger enterprise form, the RTX 30 series is expected to see its first batch of cards later this year with a reveal happening mid-year. It's worth noting that AMD plans to bring new RDNA 2 card to the market too - building off the tech found in the PlayStation 5 and Xbox Series X. Meaning, we're in for a massive graphics showdown across PC and console.

If the above is all true then the RTX 3080 Ti presents the performance boost needed to make 4K the new standard in PC gaming. NVIDIA was right, it's time to get Amped for Ampere.