A celebration of the long-running franchise and a great way to kick off Switch gaming in 2023.
Fire Emblem Engage Review - Strategy Gold
PlayStation 5 Specs Revealed, it's Powerful and Really Fast
Post by KostaAndreadis @ 12:39pm 19/03/20 | 2 Comments

With the main takeaway being that the speed of the custom drive within Sony's next console - the PlayStation 5 - presents unprecedented read speeds. Faster than the already very fast SSD solution in the Xbox Series X. In terms of raw numbers, the PlayStation 5 will leverage next-gen PCI Express to be able to handle a massive 5.5GB per second.

The news came as part of a special PS5 presentation by Sony's Mark Cerny that was broadcast last night - which goes into great detail as to why being faster will lead to bigger and more involved games with virtually no loading whatsoever. Fair warning though this sort of technical deep dive is better suited to developers than gamers - and comes just as GDC was originally planned to take place.

But here's the quick summary - the storage speeds of the PS5 are almost double that of the Xbox Series X. Elsewhere though the Xbox looks to have the edge with the CPU of the PlayStation being 8x Zen 2 Cores at 3.5GHz versus the Series X's 3.8GHz. With the teraflop count of the PS5 coming in at 10.28 versus the Series X's 12. But on that front with fewer CU (compute units) running at a higher frequency. Now comparing raw numbers is usually not the most accurate way to compare hardware but with the PS5 and Xbox Series X using similar AMD architecture, the comparisons feel apt. 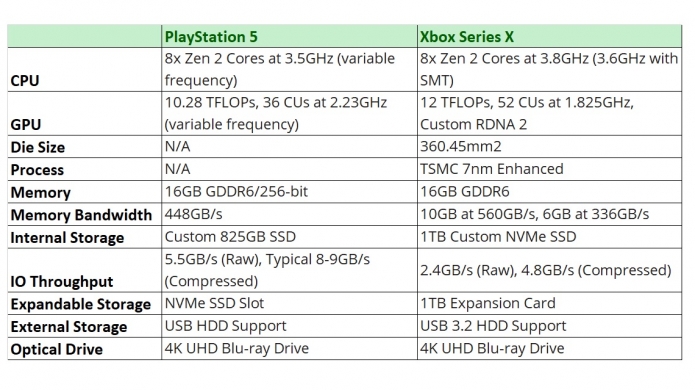 As with the Series X, the focus on speed comes at a total storage capacity cost - with the PS5 looking to house only 825GB of usable internal SSD storage. Not that the Series X's 1TB is exponentially larger but like Microsoft Sony will also support additional storage - in the form of approved NVMe SSDs via a slot that we assume will be for PCI Express 4.0 drives - which are starting to come onto the market now.

In the end this confirms that the PlayStation 5 will be magnitudes more powerful than the PlayStation 4, and faster too. But, as we're sitting in a sea of numbers it's time to bring on the games. And hey, maybe a glimpse at what the console actually looks like.