With the recent release of Fallout 76: Wastelanders, we sat down with Bethesda Game Studios to discuss its development, the original launch, and the road ahead.
Fallout 76 - The Big Interview
AUDICA Out Now - Harmonix's VR Rhythm Shooter That Looks Like Rez Meets Beat Saber
Post by KostaAndreadis @ 11:10am 06/11/19 | 0 Comments Which means it's something we're keen to check out, especially when you take into account the incredible track record of Harmonix. Frequency, Guitar Hero, Rock Band, Amplitude, and more. AUDICA leans into the electronic music roots of the studio reflected by the game's soundtrack.

But first, a look at how it plays - with the game now available for PlayStation VR, Oculus Rift, and HTC Vive (via Steam and VIVEPORT).

Campaign Mode - AUDICA’s campaign mode will see players take on the entire soundtrack across four tiers. Each tier features a handful of unique challenges - for instance, one challenge may have players using invisible guns, while another may increase the speed in which targets fly in. Players who complete the campaign will be rewarded with new blasters, environments and a very special grand finale.

Practice Mode - A fully-featured practice mode that enables players to pick specific song sections, slow them down and practice until they know it like the back of their blaster.

Map Creator - AUDICA also includes an in-game Map Creator, giving players the ability to create their own custom target map for any song on the soundtrack.

Gun Slinging - Play with style! Spin and toss your guns as you play for a little extra flair.


Here's a look at the soundtrack - which Hamronix plans to expand with downloadable songs and additional Season packs of new tracks. 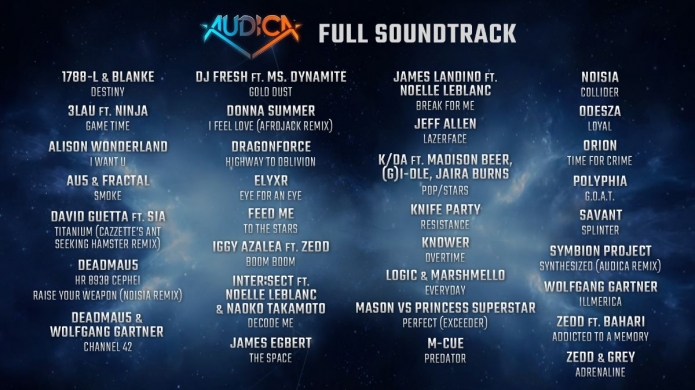