Released in 2014, Middle-earth: Shadow of Mordor was at its core Assassin's Creed but in the Lord of the Rings universe. That said, one of its most unique features dubbed the Nemesis system made it go well beyond simple clone. Where falling to named Orcs would see them rise in power and stature whereby the next time you faced them - they remembered who you were, and the way in which they took you out.

Which is why this little snippet from our in-depth hands-on preview of Star Wars Jedi: Fallen Order from Nathan Lawrence made the team here let out a collective "ooh". 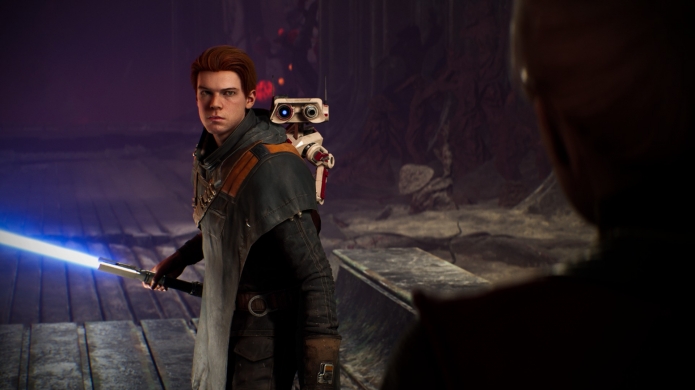 Grappling with the melee variant of Scout Troopers, who are armed with batons capable of blocking lightsabers, is tricky when they’re in groups, and any trooper with an orange pauldron means you’re in for a tough fight. Throw a rocket launcher-wielding Stormtrooper into the mix, who seemingly doesn’t give a Sith about detonating his brethren, and fights become a whole lot more frantic.

There’s a great sense of death deterrence at play, too, with clear inspiration from Dark Souls, spliced with a touch of Shadow of Mordor’s iconic Nemesis System. Die – and you will – and you’re sent back to the nearest manual save point, stripped of any XP you’d gleaned since your last upgrade point. Your killer will usually gloat about killing you, further incentivising un-Jedi-like revenge, and they now glow orange to make them easier to spot.

To get your XP back, you only have to damage them but, if like me, that death came from a backline prick with a rocket launcher, you have to get past other goons before you can deal that damage.


Much more than a simple third-person action-game Fallen Order blends a save and progression system reminiscent of Dark Souls with elements from Shadow of Morder and even Metroidvania-style exploration. It's a recipe that when you add-in the pedigree of developer Respawn and the breadth and scope of Star Wars - make this sound like a classic in the making. Or, to borrow a phrase from Darthy Vades whilst he was flying his badass Tie Fighter, The Force is Strong With This One.