With The Division 2 - Episode 2 'Pentagon: The Last Castle' arriving October 15 (for Year 1 Pass holders), as the next major content update for the game. The story is set to continue with The Black Tusk now up to no good inside the Pentagon, bringing with it new missions, a new specialisation/class, assignments, and several updates and improvements. Hit the jump for details. 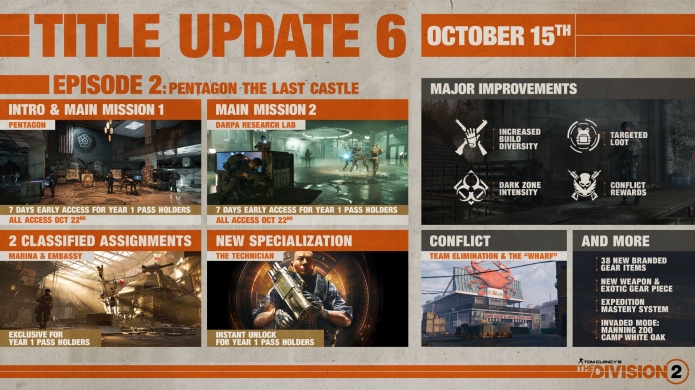 At the beginning of Episode 2, players will investigate a transmission from a fellow Agent scouting the Pentagon for the perfusion bioreactor. Securing the bioreactor would allow Agents to replicate the antiviral samples recovered at Tidal Basin. Agents must navigate flood damage and Black Tusk forces to take back The Last Castle. After securing their safe house, players will be able to access the two replayable main missions of Episode 2

First Main Mission - Pentagon: Agents will discover the location of the perfusion bioreactor inside the Pentagon’s underground research facility. The Black Tusk have already infiltrated the lab and are attempting to extract the reactor.

Second Main Mission - DARPA Research Labs: Players must make their way through the Pentagon and into the DARPA Labs, as the Black Tusk are in the process of transporting the perfusion bioreactor through an abandoned Cold War tunnel network.

Signature Weapon: P-017 Launcher – a multi-missile launcher. Agents can lock-on and hit up to six enemies (depending on available ammo). With a simple push of a button, six missiles are unleashed to seek out their targets.
Sidearm: Maxim 9
Skill Variant: Artificer Hive
Grenade Mod: EMP Grenade

Exclusive only to Year 1 Pass holders and UPLAY+ subscribers, Agents can take on two new Classified Assignments at a Boathouse and Embassy.

Marina: Outcasts have been moving weapons and supplies into a boathouse on the Potomac River, which was used as a transport depot during the outbreak to move assets to the Potomac Center and Roosevelt Island. Agents must investigate and seize all the weapons they can find.

Embassy: A Joint Task Force helicopter filled with supplies was shot down by the Outcasts and crashed through the roof of the Mexican Embassy in Washington D.C. Agents will be tasked to locate the helicopter rescue the pilot and secure the supplies before the Outcasts get there.

The new map ‘Wharf’ is on par with previous PvP maps in terms of size and takes players to an abandoned fishing harbor. It offers tactical gameplay opportunities, through flanking routes and raised positions.


The sizable update also brings many improvements and changes as per below:

Oh, and The Division 2 will be getting a free weekend from October 17-20. With Episode 2 coming to Year 1 Pass holders October 15 - content will also become available separately from October 22.