With the recent release of Fallout 76: Wastelanders, we sat down with Bethesda Game Studios to discuss its development, the original launch, and the road ahead.
Fallout 76 - The Big Interview
AMD Announces the Budget Friendly Navi-Based Radeon RX 5500 for Desktop and Notebook Systems
Post by KostaAndreadis @ 02:10pm 08/10/19 | 0 Comments With the target being high-performance 1080p gaming utilising the latest 7nm Navi process technology. The Radeon RX 5500 will be available in desktop form factor and will also come to laptops from HP, Lenovo, and MSI as the Radeon RX 5500M. AMD states that the card will provide up to 37 percent faster performance compared to the competition, which in materials supplied is NVIDIA's GeForce GTX 1650.

Of course these figures are based on manufacturer benchmarks. 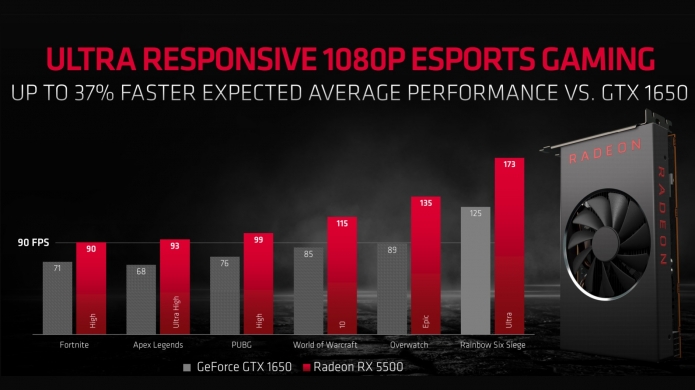 Compared to the RX 5700 XT, which is considered a mid-range card (targeting 1440p (performance) the RX 5500 features just over half the Compute Units and a 128-bit memory interface versus 256-bit. The plus side is more performance per watt than older Radeon cards (the desktop RX 5500 has a 150W power rating) in addition to Navi features like Radeon Image Sharpening and Radeon Anti-Lag.

Pricing is yet to be confirmed, but the cards and laptops with the mobile versions of the RX 5500 are expected to launch sometime in Q4 2019.