With the release of Ghost Recon Breakpoint less than a month out, hitting Xbox One, PS4, and PC on October 4 - a Closed Beta for the game is taking place this weekend. For those that pre-ordered or were selected via the sign-up process, giving access to co-op story content on the new location of Aurora. Alongside that we've got details on the post-launch Year 1 roadmap and a new live action trailer.

Starring Jon Bernthal as Cole D. Walker, leader of the Wolves. Who's not to happy with the state of the things.

Post-launch, Ubisoft will be releasing new content for Ghost Recon Breakpoint every four months - which will include everything from new story missions to raids, multiplayer modes and maps, and special events. With the launch window set to get a Terminator themed event. 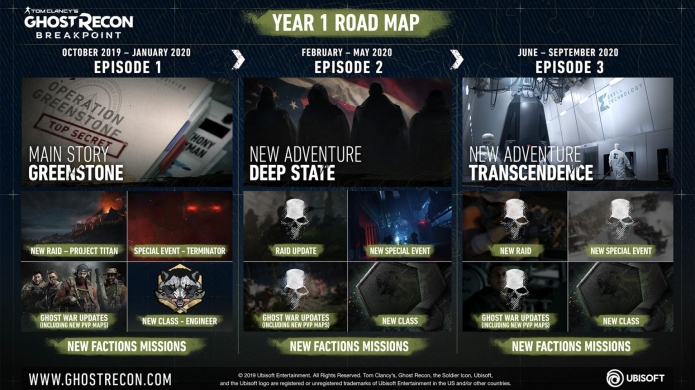 New Adventures: New story-driven content that expands the main story of the game will be available with each episode.

New End-Game Content: Every Episode will bring new End-Game content. Episode 1 brings the Project Titan Raid. Players will explore an active volcano on a new island in the Auroa archipelago where they need to use all the skills learned on Auroa in intense four-play co-op challenges. The Raid is replayable and adaptable for all play styles.

New Classes: Three new classes will be introduced in Year 1, starting with the Engineer which brings an expertise in hacking.

Live Events: These events will feature VIPs that will help Nomad tackle new, terrible threats. A new Event will be available with each Year 1 Episode and lasts one month.

PvP Updates: In addition to the three new classes coming Year 1, which will be fully playable in PvP, new maps and updates will keep Ghost War players on their toes.

Regular New Content: New content such as new missions, activities and unlockables will be available with each new episode.