Where we fall in love with the turn-based RPG combat and new protagonist Ichiban Kasuga.
Yakuza Goes Full RPG In The Brilliant Yakuza: Like a Dragon
Watch This - The RTX-On Raytracing Debut of Watch Dogs: Legion, Call of Duty: Modern Warfare, and More
Post by KostaAndreadis @ 05:49pm 19/08/19 | 0 Comments

With Gamescom kicking off this week, NVIDIA has begun the gaming festivities a little early with a decent helping of new trailers and other tidbits for upcoming titles. Games that will take advantage of the NVIDIA GeForce RTX line of GPUs. And that little thing called raytracing.

Well, it's not little, the difference it brings is often huge - as highlighted below. First up is the debut of raytracing enabled in Watch Dogs: Legion which seemingly adds ray-traced reflections to just about every surface you can think of. Including wet pavement reflecting the neon light and glow of nearby signage. It looks impressive, doubly so when you factor in that this is an open-world game.

As per the announcement, "These high-fidelity, immersive reflections replace cube maps and screen space reflections, enabling windows, puddles, cars, and other surfaces to accurately reflect their surroundings, characters in the world, and the chaos caused by the player."

Next up comes Call of Duty: Modern Warfare which offers up a more subtle use of raytracing, this time used to ensure shadow details is more accurate and realistic. Going so far as to remove some entirely if their placement in the scene is incorrect. Of course it's hard to get too excited for shadow detail, "Woo! Go Shadows!", but we expect this implementation of raytracing will be something that adds to the realism of the next Call of Duty.

Next up is a Tencent Next Studios joint called SYNCED: Off-Planet which is described as a "new PvPvE and co-op action game". On PC it will support raytracing for both shadows and reflections. Check it out.

And finally, although we didn't get a trailer we finally got word on Wolfenstein: Youngblood's raytracing - which will come in the form of reflections. No word as to when the update will arrive, but we did get a couple of screenshots showcasing the effect. 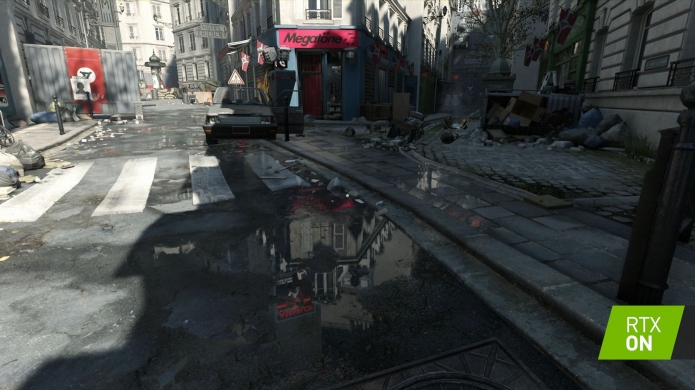 “In the year since NVIDIA made it possible to achieve real-time ray tracing in games, this revolutionary technology has been embraced across the industry,” said Matt Wuebbling, head of GeForce marketing at NVIDIA. “Looking at the number of games, the big-name franchises and the breathtaking visuals at our Gamescom 2019 event, it’s clear that ray tracing has arrived and is truly the way forward for game development.”

For more, check out some of the other NVIDIA RTX announcements from Gamescom.