Speaking to the team at Blizzard about all things Diablo IV, we got confirmation that the team is planning some pretty epic stuff for its post-launch Seasons.
Diablo 4’s Seasons will Change Sanctuary in Dramatic Ways
Hideo Kojima's Death Stranding Release Date Set for November 8
Post by KostaAndreadis @ 12:56pm 30/05/19 | 0 Comments

Which is when it will make its PlayStation 4 debut. Death Stranding, the first game from Kojima Productions has been on our radar for quite some time due to the sheer vision of its director Hideo Kojima (of Metal Gear Solid fame). Alongside the November 8 release date there's also a lengthy new trailer that showcases gameplay in addition to its mysterious and very weird setting.

Check it out. It's, well, amazing. We think.

And as a nice little bonus here's a description of the game from Kojima himself.

People have created “Walls” and become accustomed to living in isolation.

“Death Stranding” is a completely new type of action game, where the goal of the player is to reconnect isolated cities and a fragmented society. It is created so that all elements, including the story and gameplay, are bound together by the theme of the “Strand” or connection. As Sam Porter Bridges, you will attempt to bridge the divides in society, and in doing create new bonds or “Strands” with other players around the globe. Through your experience playing the game, I hope you’ll come to understand the true importance of forging connections with others.


The lengthy trailer confirms that the game will be set in America, or what's left of it. In addition to dealing with what looks like history come-to-life with protagonist Sam (Norman Reedus) going up against Cliff (Mads Mikkelsen) alongside a huge cast of familiar faces. Gameplay-wise there looks to be a mix of exploration, stealth, and action with Sam's tools and arsenal part of a very-large BRIDGES Cargo Case he carries around. In one small snippet of footage an item falls loose after being hit by an enemy with Sam dodging and weaving to retrieve it. Then there are the locations both beautiful and horrifying with what looks like a section reliving a battle from a past war.

Of course there's still plenty of mysterious and weird imagery too, including some form of sentient baby inside what's called a BB Pod. Which looks to be a major focus of the story. Something that will flow into the Death Stranding Collector’s Edition ($289.95 AUD) - which comes with a Life-sized BB Pod Statue. Yeah. 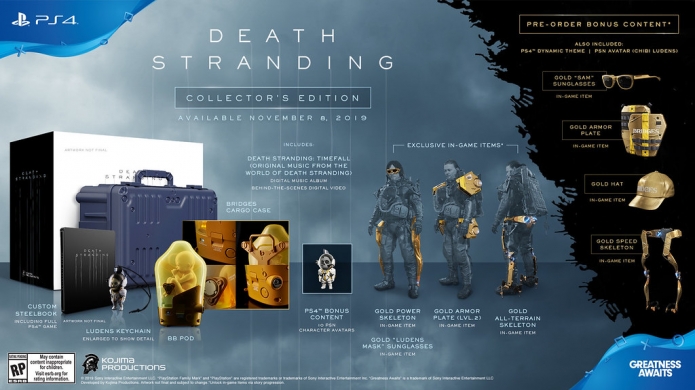 Here's a closer look with Kojima himself holding it. Definitely life-sized.

We're pretty excited for this one because it looks, well, different to just about any game that has ever existed. Whilst retaining Kojima's flair for cinematic presentation. The final shot in this new trailer is stunning as we see Mads Mikkelsen's Cliff emerge from what looks like a swamp in the middle of burning jungle, where he then lights a cigarette with falling ash as a squad of what look like World War II ghost-skeletons also emerge. And join him, for, something.