The Division 2 offers up a wide range of activities, missions, and events long before the endgame begins, which is something we praised in our full review. But with the new Black Tusk enemy faction arriving to cause havoc across Washington after the credits roll - the faction's own Stronghold and The Division 2's World Tier 5 remained locked. Until next week that is.

Which is when the fourth Stronghold, Tidal Basin, is set to be released - alongside the progression to World Tier 5 (The Division 2's endgame difficulty slider) once completed. As part of he Invasion: Battle for D.C. content update coming April 5 - the new Stronghold will also introduce new invasion missions (which are previous story missions now overrun by the new Black Tusk faction) in addition to the first Gear Sets and a new Heroic difficulty setting. 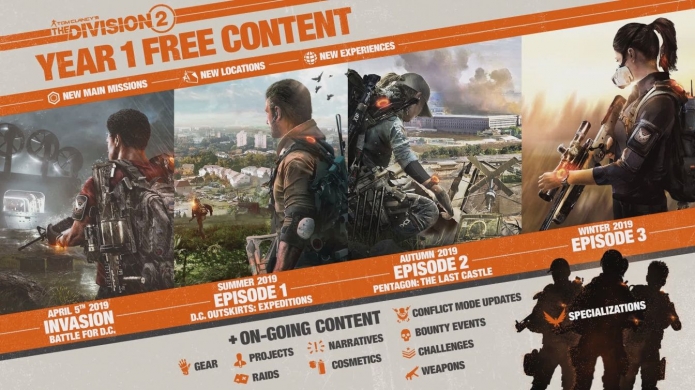 The first three Gear Sets have been revealed to be: True Patriot, Hardwired and Ongoing Directive. With details on the True Patriot set pointing to a pretty impressive set of bonuses around applying coloured flags to enemy's hit. Which as per the naming is all about the Red, White, and Blue. Enemies hit first get a Red debuff that reduces their outgoing damage. White enemies restore your Armor when hit, and Blue reduces skill cooldowns. And hitting enemies with Red, White, and Blue debuffs will spread the effect to nearby enemies.

It's a fantastic way to separate Gear Sets in The Division 2 from the in-game brand sets that offer more standard or expected buffs to things like damage, health, and so forth.

The update will also come alongside the first major balance patch.