Hideo Kojima's latest looks wonderful running on a modern PC rig, and it's still as weird and strange and alluring as ever.
Death Stranding on PC - A Stunning Odyssey
Fire Emblem: Three Houses Might be the Most Ambitious and In-Depth Fire Emblem Yet
Post by Steve Farrelly @ 03:37pm 14/02/19 | 0 Comments More Ninty news from today's Direct features one my most anticipated games for 2019, in Fire Emblem: Three Houses. This time around, the player takes on the role of a Professor at an academy where three houses -- representing different nations of the continent -- learn and compete, Harry Potter styles, but with life and death risks at stake.

Here's the official line from Nintendo:

Three noble houses that are part of the Officer’s Academy, an elite facility that trains students in the ways of weapons, magic and special skills. As a professor, the player must choose one of these houses to lead its students in grid-based battles with life-or-death stakes. Each house is comprised of many different students to meet and train, each with her or his own personality and skills. These students can interact with each other at the academy, strengthening their bonds and supporting each other on the battlefield. The Fire Emblem: Three Houses standalone game and the Fire Emblem: Three Houses – Seasons of Warfare Edition both launch exclusively for Nintendo Switch on July 26.

The Warfare Edition mentioned at the end there features a Steel Book game case, a calendar, an art book and a soundtrack as well as some nifty packaging. as you can see below. Scroll down further for a five-plus minute breakdown of the game that might actually now be in my Top Three must-haves for the year. 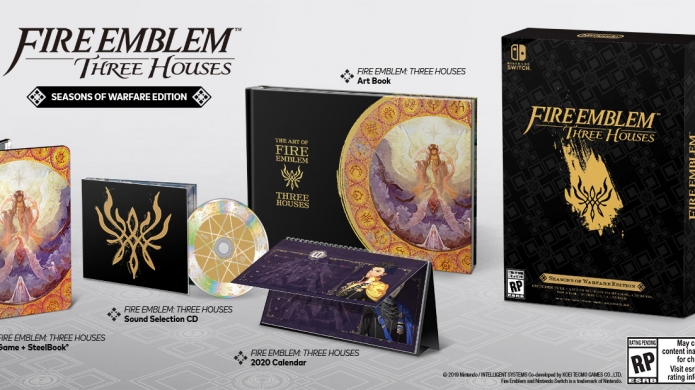