A celebration of the long-running franchise and a great way to kick off Switch gaming in 2023.
Fire Emblem Engage Review - Strategy Gold
Warhammer: Chaosbane - The Diablo 3-Style Action RPG is Out in June
Post by KostaAndreadis @ 03:43pm 08/02/19 | 0 Comments Once we saw it in motion, Warhammer: Chaosbane instantly grabbed our attention. A co-op action-RPG that features fast-paced action and fun looking abilities split across various classes. There's a Warhammer game for just about all occasions, which makes us happy that there' an action-RPG with the same focus on fast action and smooth combat ala Blizzard's Diablo 3.

The first hack and slash to take place in the Warhammer Fantasy Battles world, Warhammer: Chaosbane plunges the player into the heart of the Old World, a continent marked by the Great War Against Chaos, a bloody conflict which ravaged the Empire of men. They will embody a human, a high elf, a wood elf, or a dwarf, and discover the iconic locations of the Warhammer Fantasy Battles universe that’s captured the imaginations of millions of fans across the world.

It's out June 4 on PC, Xbox On, and PlayStation 4. And as it's the way with all things, pre-orders are now open across various versions - confirming that there's also a Season Pass. 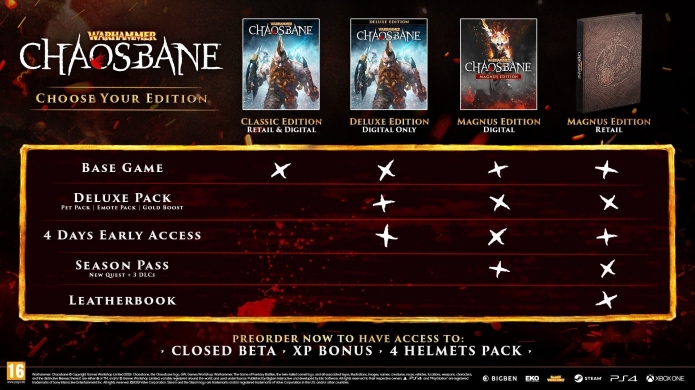 Pre-ordering also gets you access to two planned Private Beta periods that will run beginning in March.