With one leading directly into the other. The Rainbow Six Summer Series is a new month-long series commencing January 19 that will encompass an online single elimination affair. Open to teams over the age of 15, all ANZ Pro League Season 9 teams will be eligible and invited to participate. All remaining slots to be filled by the best teams from the PC Go4 tournament on January 13.

Of which sign-ups are open now. 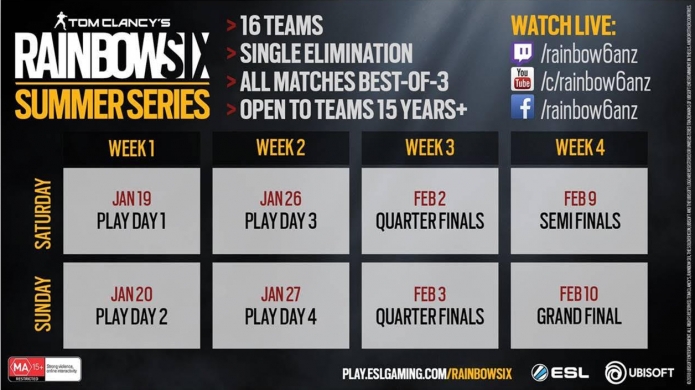 The top four finishes of the Summer Series, sharing in a $5,000 prize pool, will then move on to the Six Oceanic Cup in March. A two-week, best of three single elimination affair whch will have its semi-finals and grand-finals take place at the ESL Studios in Sydney on March 23. More details on this event, including tickets and pricing and prize pool - to follow.

Things are definitely picking up when to local competitive Rainbow Six Siege, with Sebastian Østfeldt, Brand & Esports Manager at Ubisoft Australia, stating, “After the very successful launch of the Six Masters 2018 at PAX Australia in October, we couldn’t be more excited to announce the Six Oceanic Cup and the Rainbow Six Summer Series. These new tournaments represent the next step in our long-term plan to establish Rainbow Six as a mainstay esports title in the ANZ and APAC regions and remind the industry."

All Rainbow Six ANZ esports action can be seen over at twitch.tv/rainbow6anz.