Out of retirement and back patrolling the space streets, we take an updated look at Oberon Prime and Nekros Prime
Inside the Warframe Vault - Our Guide to Oberon and Nekros Prime
Leisure Suit Larry Creator Selling His Source Code to the Original Game
Post by KostaAndreadis @ 12:45pm 03/12/18 | 0 Comments Released in 1987, Sierra's Leisure Suit Larry in the Land of the Lounge Lizards was first and foremost a comedy. It's adult subject matter a by-product of creator Al Lowe being tasked with updating an old text adventure called Softporn Adventure using the same engine that helped create the first King's Quest. And now, over thirty years later, Al Lowe is selling the source code on eBay. 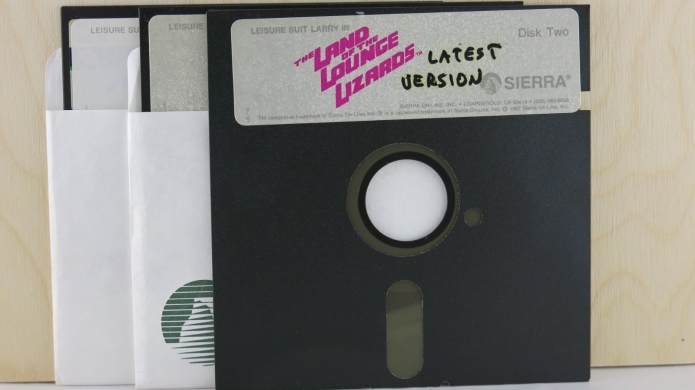 You’re looking at a one-of-a-kind opportunity to own a piece of computer game history: my archives of LSL1: Leisure Suit Larry in the Land of the Lounge Lizards.

When I finished creating Larry 1, I thought I should keep a clean archive of everything needed to recreate the game, so I copied all the source code, text, animation, background art, music, sound effect… everything I could to these floppies. I then packed them in a box (that once contained blank floppies that I bought to produce my games before my Sierra days). I then put that yellow box into a black storage box where it sat, undisturbed, for over 30 years!

Now you can own that box. Look carefully at the photos to see all the treasuries I found. Even I was surprised! You see, back then,programmers like me had to keep track of their own resources. Sierra never kept any archives. If I didn’t keep everything, it would have been lost.

You’ll have the original shipping master disk that I gave to Sierra and from which all subsequent copies were made. There’s also a 3.5"disk that contains a complete ZIP file of Larry 1, plus a ZIP of The Black Cauldron, which has no business being here. (I don’t know why, but it’s yours if you want it!) I noticed that I used the Larry labels to indicate Disk 1 and Disk 2, even of the source code and animation (which we always called “views”).


A very cool slice of gaming history no doubt, and something that also highlights the need for proper archiving - where stuff like this can be stored and preserved for future reference. Also up for sale, the source code for the superior sequel Leisure Suit Larry Goes Looking for Love (in Several Wrong Places).

The source code for the original is something people are certainly interested in with the auction currently sitting at US $9,201.00.