Ever since NVIDIA announced its new line RTX GPUs earlier this week many have been wondering outside of ray-tracing and other groundbreaking new features, what sort of performance numbers would we be looking at compared to the current Pascal-based GeForce GTX 1080. Well, according to official figures - around about 50% and a promise of 4K 60fps gaming at max settings.

Of course official numbers should be taken with a grain of salt, or two, but if these are to be believed then the Turing-powered RTX 2080 will no doubt be a powerhouse when it launches next month. NVIDIA's figures cover 10 of the most popular or visually intensive PC games currently available including Far Cry 5, Call of Duty WWII, and Final Fantasy XV. 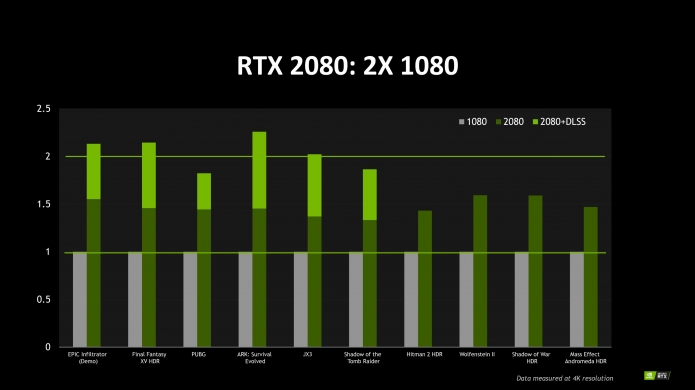 It's also worth noting that NVIDIA claims that games that utilise the RTX's "deep learning super-sampling," or DLSS, will feature even greater performance boosts. Which is depicted by the bright green bars in the slide above. Naturally, ray-tracing and DLSS, won't be supported by every game but so far NVIDIA has been able to secure support from a number of big upcoming releases including Shadow of the Tomb Raider and Battlefield V.