Shadowlands is set to get its first major content drop, we chat to Blizzard about what's in store and telling stories in the afterlife.
World of Warcraft Shadowlands Unleash the Chains of Domination
HTC Responds to Report that VR Sales are in a Steep Decline
Post by KostaAndreadis @ 01:30pm 27/07/18 | 1 Comments No doubt there were many analysts a few years ago touting that the next "big thing" in game tech would be VR or Virtual Reality. As of now the general feeling is that consumer VR, which includes the HTC Vive and Oculus Rift, are more enthusiast or niche than mass market devices. Responding to a recent report over at Digital Trends that begins with "VR is in a tailspin", HTC defends the Vive while claiming sales are on the up.

The initial report is interesting but a little biased as it only seems to track Amazon sales data. But even so it's pretty clear that the cheaper VR offerings, or mass-market devices, like Samsung Gear VR and Oculus Go show a downward trend in popularity and sales.

In relation to the Vive, HTC responded,

"VIVE has paced at its highest sales velocity of all time, for weeks on end, and we sold out. For a consumer electronic product in its third calendar year, this continued trajectory is nearly unheard of.

We are ramping up production of the original VIVE and units will continue to roll out to online and retail over the coming weeks.


Adding that Premium VR is finding a wider audience than just consumers and that new advances in technology will see growth across games and business applications.

Premium VR has solidified and ramped up over time, yet the major players have not released sales figures to substantiate the market momentum.

The overall VR experience continues to improve with the enhanced resolution and comfort of the HTC VIVE Pro, more titles, more accessories, and soon, less cables. Yet, the analysts aren’t predicting a watershed moment based on these improvements.


The report also includes data confirming that the Vive currently leads in VR market share with 35.7%, followed by Samsung and then Sony. Oculus surprisingly comes in fourth with 9.0%. 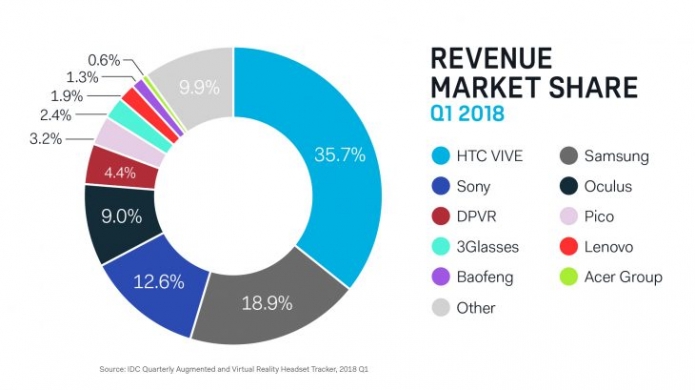 This all leads to HTC's argument that the Vive so far has been a success and as new technologies lead to wireless and other innovations, VR will continue to grow. Yesterday we posted our in-depth review of the HTC Vive Pro, which you can read here.