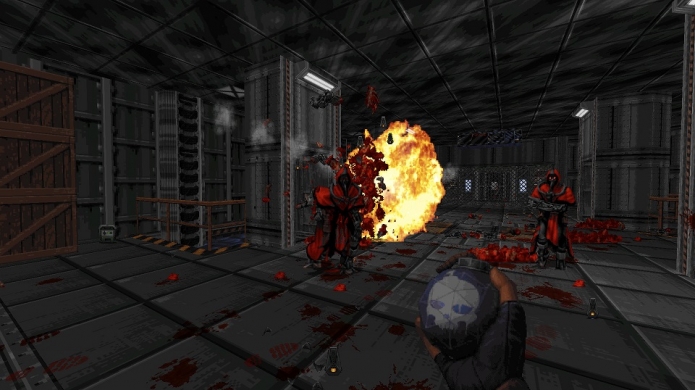 Plus, there will be a limited edition 'Big Box' release featuring a number of goodies in addition to coming in one of those overly large PC game boxes from the '80s and '90s. For those that need a refresher Ion Maiden is a new shooter from 3D Realms and Voidpoint created using the same Build engine (albeit updated) that powered Duke Nukem 3D.

But even in an updated state the current Early Access version of Ion Maiden features an impressively small 32MB installation size. And that's Megabyte. Originally due for release in the second half of this year, the delay comes alongside the news that it will launch with a feature-packed fast-paced multiplayer mode. Having played through the first few levels Ion Maiden is a lot of fun and definitely feels like a spiritual successor to the original Duke Nukem 3D.

"We wanted Ion Maiden out as soon as possible, but it has to be the best it can be," Frederik Schreiber, Vice President of 3D Realms said. "But this extra time means we can make this awesome Big Box edition and add multiplayer at launch, so we hope players understand." In regard to the Big Box edition, no doubt this will be a highly sought after collector's item.

In addition to the special Founder’s Edition including the full game on a floppy disk that's also a retractable USB stick it will also feature:


At the time of writing about half of the 500 Founder's Editions have been sold. The Early Access preview is currently available to play via Steam.