Speaking to the team at Blizzard about all things Diablo IV, we got confirmation that the team is planning some pretty epic stuff for its post-launch Seasons.
Diablo 4’s Seasons will Change Sanctuary in Dramatic Ways
Red Dead Redemption 2 Special and Ultimate Editions Detailed
Post by KostaAndreadis @ 12:23pm 05/06/18 | 0 Comments With pre-orders open now for what just might be the most anticipated release of the year. Naturally the standard edition gets you the game and some added goodies, but since that's not enough for some, there are also Special and Ultimate Red Dead Redemption II editions planned. Where the majority of the bonus content is focused on story.

First up all pre-orders include two single-player bonuses - a horse and some supplies! Plus, additional goodies for those that pre-order digitally in the form of in-game cash and a few treasure maps.

War Horse: This handsome iron-grey-colored Ardennes War Horse can always be relied on in the heat of the battle. With greater courage and stamina than the average steed, this is a horse that knows how to keep its head under fire. 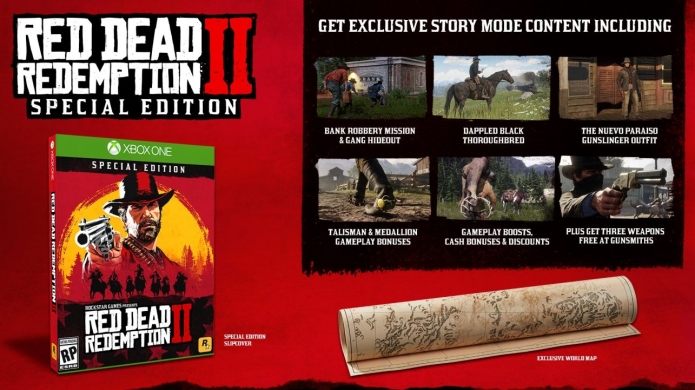 The Special Edition bonuses sound very cool. We're talking an exclusive story mission, an even better horse, and a magical talisman. Yeah, we weren't ready for that last one either.

Bank Robbery Mission and Gang Hideout in Story Mode: Get exclusive access to a Bank Robbery Mission, in which Arthur and a couple of his fellow gang members come up with a daring plan to break in and rob the bank in the southern town of Rhodes. Elsewhere, the Del Lobos Gang has taken over a hacienda – clear this gang’s hideout and rob their stash for a lucrative take.

Dappled Black Thoroughbred: This thoroughbred racehorse sporting a beautiful reverse-dappled black coat will keep you at the front of the pack with its exceptional speed and acceleration. You will also get the exclusive Nuevo Paraiso Saddle, handmade in dark chocolate leather with silver medallion detailing. This horse and saddle are available in Red Dead Redemption 2 Story Mode.

Talisman and Medallion Gameplay Bonuses: These special Story Mode items will give Arthur a helping hand whenever they are equipped. Attaching the Eagle Talon Talisman to his boot, Arthur’s environmental awareness skill will last longer. By carrying the Iguana Scale in his personal Satchel, Arthur will take less damage while riding on horseback.

Gameplay Boosts, Cash Bonuses & Discounts: This collection of exclusive Story Mode boosts, bonuses and discounts will help Arthur to survive out in the harsh wilderness and better provide for his gang members and their camp. The Core Stat boost benefits Arthur’s Stamina, Health, and Dead Eye Cores. Earn more cash during robbery missions with the Van der Linde gang, and when hunting and selling animal carcasses. Receive discounts on all upgrades to the Van der Linde gang’s camp.

Free Access to Additional Weapons: A good range of weapons is essential for survival in the Old West. Get free access to three weapons at the in-game Gunsmiths in Story Mode: the robust Volcanic Pistol, devastating Pump Action Shotgun, and versatile Lancaster Varmint Rifle. 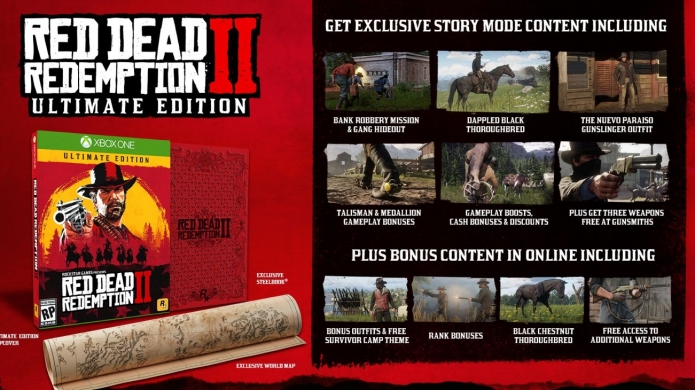 The Ultimate Edition is all about online, with a number of goodies for what we assume will be Red Dead Online at launch.

Free Access to Additional Weapons: Get access to the Volcanic Pistol, Pump Action Shotgun and Lancaster Varmint Rifle, free of charge from Gunsmiths in online.

Rank Bonuses: As a great start for all Ultimate Edition players, you can rank up faster in online, up to rank 25. 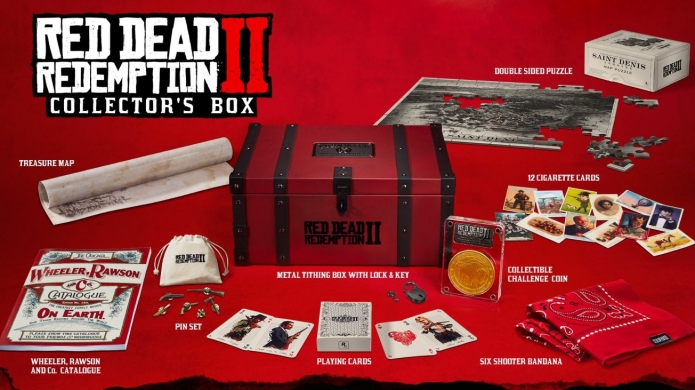 Because you can never have enough editions of a thing, a limited Red Dead Redemption 2: Collector’s Box is also planned that will include a number of tangible real-world goodies in the form of the aforementioned box, coins, pin set, puzzle, bandana, playing cards, and a copy of the Wheeler, Rawson and Co. Catalogue. Very cool.

Red Dead Redemption II is out October 26 for PlayStation 4 and Xbox One.