Monolith Soft's Xenoblade series has always featured memorable stories and characters. With Xenoblade Chronicles 3, the studio might have delivered its masterpiece.
Xenoblade Chronicles 3 Review - An RPG Masterpiece
Battlefield V Reveal: Launches In October, Set In WWII, and Will Not Have Paid DLC
Post by SeamusMullins @ 09:50am 24/05/18 | 4 Comments EA and Battlefield series developer DICE have announced that Battlefield V will be set in World War 2, will not have a premium pass or paid expansions and will release in October this year. A lot to take in I know.

Returning to its roots, Battlefield V will take place during the WWII era, after the original Battlefield was first set in the second World War in Battlefield 1942, released back in 2002. Battlefield V will explore the world wide conflict across several theatres, including mainland Europe in the french countryside, the city of Rotterdam in Netherlands, as well in Norway in the Arctic Circle and in the deserts of North Africa.

The single player mode War Stories, will continue on from Battlefield 1 in V and explore new diverse regions and unique untold stories of the soldiers who fought during WWII, including a resistance group in Norway, battling against the Nazi regime and the frosty elements. 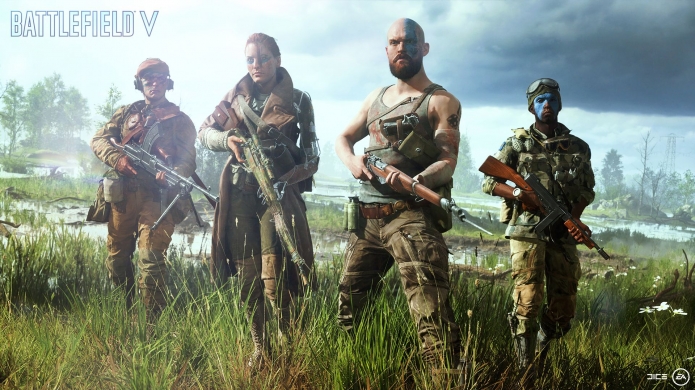 The big new mode for multiplayer in Battlefield V is Grand Operations, which builds upon the popular Operations mode first introduced in Battlefield 1, which similarly combines several modes and maps over one big match. But importantly, the result of each round or day, has a greater impact on the supplies and respawn reinforcements available to each side at the start of each new day, and also whether the Operation leads to a climactic finale, in which each player may only have one life and it is a last man standing situation. While standard Battlefield modes you’ve come to expect are returning, including the 64-player Conquest, Team Deathmatch and Domination, to fill out the multiplayer roster of modes.

There is also a new co-operative mode called Combined Arms coming to Battlefield V, which allows up to four players to tackle a wide variety of missions together online.

We’ll have more impressions and specific details about the new modes and changes to gameplay coming to Battlefield V in a upcoming feature, in the meantime though, EA have released a trailer showing off the chaotic and varied moment to moment gameplay of Battlefield V, which you can watch below.