That, well, sounds like the best use of the furry little teddy bears since the debut of Caravan of Courage. In Ewok Hunt, which takes place at night on the Forest Moon of Endor, Imperial Stormtroopers armed with blasters and flashlights need to fend off an attack from hard to see Ewoks as they await a transport.

Every fallen Imperial spawns as an Ewok until all are gone or somehow one manages to survive a hellish night being hunted by Ewoks. It sounds awesome to be honest. Just the idea of an Ewok jumping out of the shadows to attack an unsuspecting stormtrooper with a spear, in the dead of night, is equal parts comedy and horror. 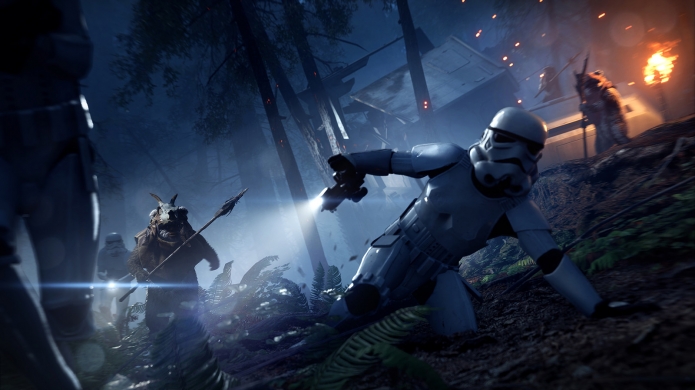 Ewok Hunt is a limited time event that goes live April 18 alongside a new update that will re-introduce Crystals as a way to unlock new Appearances - aka cosmetics. Crystals is the new real-world currency micro-transaction system for Star Wars Battlefront II that does away with the pay-to-win RNG loot box approach of the launch edition.