And it's called It Lurks Below. Which blends retro visuals with RPG mechanics and inspiration from indie creative hits like Terraria and Minecraft. Developed by David Brevik, and his one-man studio Greybeard Games, it marks his first release since 2013. It Lurks Below gameplay footage will be streamed this weekend on his Twitch channel.

Fans of David Brevik will know him as one of the co-creators of Diablo and one the heads of the now defunct Blizzard North, where his work alongside colleagues was instrumental in bringing us both Diablo and Diablo II.

Since then he also served as head honcho at another defunct studio Gazillion, which developed the Marvel meets Diablo free-to-play title Marvel Heroes. 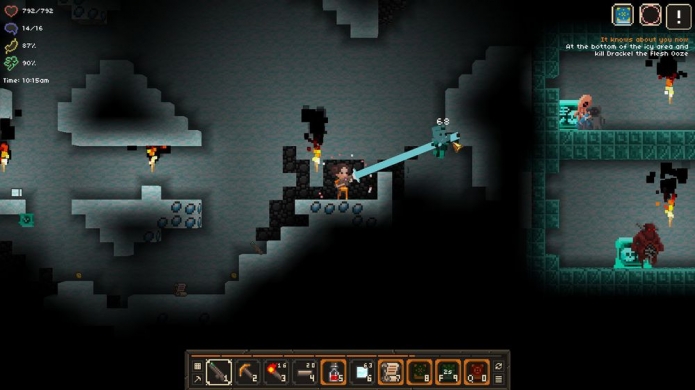 “Though I certainly had creative influence as CEO of Gazillion, I feel like I’m finally right back where I belong—actually getting my hands dirty and creating great games,” says Brevik. “It’s humbling going from large teams making content based on huge properties like Marvel to a one-man team with a brand new idea no one has heard of yet—but I’m loving every minute of the process. It’s all very exciting…and a little bit scary, too. I’ve always been a huge proponent of community involvement in game creation, and I heartily welcome all feedback from players and Twitch-stream viewers—anything that can make It Lurks Below the best it can possibly be.”