An entry level take on a well-worn genre that after a few hours will have you heading for the exit.
Minecraft Dungeons Review - Between a Block and a Hard Place
Rare's Sea of Thieves Poses the Question, 'Can You Bond With Strangers?'
Post by KostaAndreadis @ 05:55pm 21/11/17 | 1 Comments From a design perspective when you break down some of Sea of Thieves' mechanics, from having one person steer the ship, another navigate, and someone else fending off attackers, you get the sense that you'll need a crew of friends heading into the experience. But developer Rare has purposefully kept its alpha testing and design in the realm of having strangers team up, work together, and figure it all out.

Speaking with Executive Producer Joe Neate, it's something that has played an important role in creating Sea of Thieves. By having a game that should be playable on your own, connecting with others. And how all of that is linked to the simple idea of creating an experience that makes you smile - which helps foster strong emotional bonds with other players. Strangers.

"You will smile and laugh playing Sea of Thieves," Joe Neate tells me. "That's purposeful, because one of the key challenges and opportunities for a game like Sea of Thieves: bundling strangers together and getting them to have a great time as a crew. Then ultimately, hopefully making friends on Xbox Live, and everything. So, putting those things in there that make you smile has been deliberate. When you smile with someone, or laugh with someone, a stranger in any environment, you end up bonding with that person and becoming friends. We very much made that decision to do the same thing with our mechanics. Even musical instruments, the fact that I start playing and it's fun to watch the animations and everything. But if you start playing, the music syncs up, it makes you smile. It makes you laugh. There's no mechanical value to a feature like that, but there's an emotional value."

In order to test this aspect, and huge part of Sea of Thieves, Rare didn't allow people to simply bring in their friends when they were let into the alpha tests. "I think the number one challenge we set ourselves was that we knew friends playing together would have a great time." Joe explains. "Our challenge was ‘Can we make a game that bonds strangers together?’ Because not everyone's gonna have friends coming into this game and into this world. That's why we've been running a technical alpha since December last year. We started with 1000 players and 140,000 have been invited in. But we purposefully didn't, when we filtered the people coming in, we didn't allow people to bring their friends. Even though people were like "Come on, let me bring my friends in! I want to play with my friends." It was like "No. We want to test. Can you bond with strangers?" 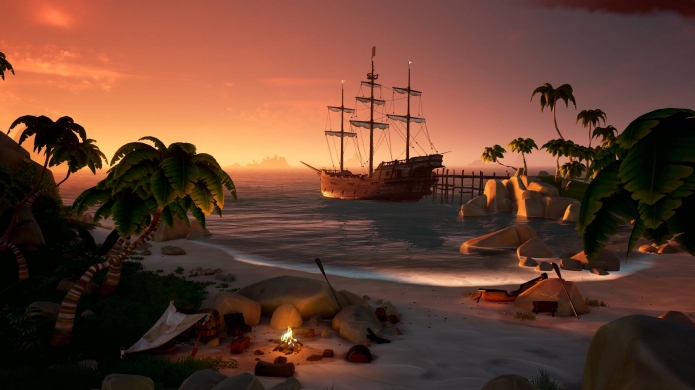 "We can look at our telemetry and go 'These players have played together. Have they become friends afterwards?' One of our top players that we checked a few months ago, there's a lady called BlondieButGeeky. That's her Gamertag. She's a big Xbox fan. She came into our alpha and after about three months, she'd made 42 new friends from play the game. The next one had like 36."

Invariably the cynic in all of us will point to the volatile nature of playing online with random people, and how they just might, well, be a dick and troll instead becoming a valuable member of the crew. The secret to Sea of Thieves lies with its setting, pirates and the high seas. Something that Rare used to inform everything, from finding treasure using a dusty old map through to dealing with toxic behaviour.

"We wanted to put our own spin on this aspect of multiplayer gaming. To not necessarily look at what other games are doing, but look at what's right for Sea of Thieves," Joe adds. "You can't kick a player out of your game. You can lock them in the brig and then if that player continues to be toxic, you can mute them, so you don't have to hear them anymore. That player must choose to quit the game."

"That's a real psychological shift from, well, if you get your kicks out of being a toxic player, which some people do. Then it's almost like a badge of honour if they get kicked out of the game. With the brig mechanic, you have to choose to leave. You can stay locked in there too, and if they want to mute you, you're literally just there admitting defeat. It's managing player behaviour and everything else."

Fascinating stuff, and be sure to check back tomorrow for our full interview with Joe Neate about all things Sea of Thieves.