Shadowlands is set to get its first major content drop, we chat to Blizzard about what's in store and telling stories in the afterlife.
World of Warcraft Shadowlands Unleash the Chains of Domination
Mafia III's Story to Continue in 2017 with a String of DLC Content Packs
Post by KostaAndreadis @ 03:14pm 06/02/17 | 1 Comments Last year's Mafia III received a mixed response from critics, with most pointing to the repetitive mission design as one of the reasons it didn't shine quite as bright as many had hoped. But, when it came to the story side of things, many were on the side that it was an engaging tale with many great characters. And on that note 2017 is looking to be a pretty good year for Mafia III fans, with three separate story-based DLC packs set for release -- starting next month.

The first of which is called "Faster, Baby!" and will see Lincoln team-up with Roxy Laveau for some fast driving, and action as they take down a corrupt Sheriff. More detail on that and the two additional DLC packs below. 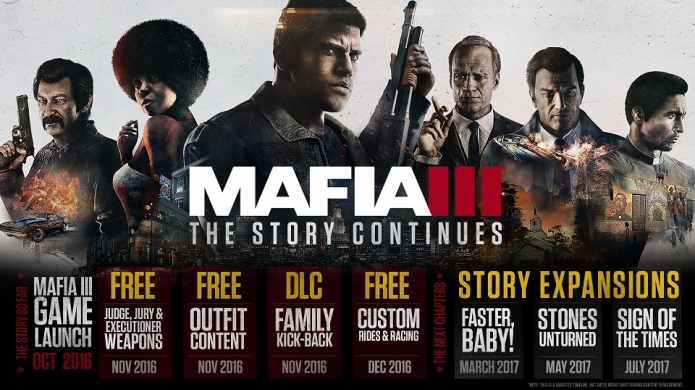 “Stones Unturned”
May 2017
When a merciless rival resurfaces in New Bordeaux, Lincoln must join forces with CIA agent John Donovan to settle a blood feud that began in the war-torn jungles of Vietnam.

“Sign of the Times”
July 2017
A string of ritualistic killings has New Bordeaux on the edge of terror. At Father James’ request, Lincoln agrees to hunt down the cult responsible, a quest that will take him from the dark heart of the old bayou to the drug-ridden counterculture of the inner city.

For those that did find the overall mission design in Mafia III a little repetitive, the DLC story packs are said to feature new gameplay mechanics, features, and even, environments.