Battlefield 1 has provided one of the best multiplayer shooter experiences this year. And by going back to World Ware 1, developer DICE has managed to outshine a competitive field made up of titles that were almost exclusively set in the future. The first expansion for the game won't be out until March 2017, but to give us a glimpse at what's in store we've got some new details, great concept art, and hints at some even more intense close quarter trench combat headed our way.

Called They Shall Not Pass the first Battlefield 1 expansion introduces the French Army faction and will focus on events of the infamous and quite brutal Battle of Verdun. And although we don't have any in-game footage or screenshots, DICE has released some concept art that it says point to the type of look and feel that the new maps, and encounters are aiming for.

The most evocative image is without a doubt the one that you see above. It depicts the opening moments of the Battle of Verdun, where the huge forest that surrounds the city erupted into flame thanks to the 1 million plus shells that were fired. The image we see hints at a new map set in the midst of this blaze, and if executed correctly could provide Battlefield 1 with yet another stunning, and horrific, visual spectacle.

The historic Fort Vaux is one filled with underground corridors and galleries. We won't lie, this image conjurers up a bunch of memories playing the now iconic (and infamous) Lockers map from Battlefield 4. A map that has it detractors sure, and we can understand why, but the sheer insanity of smoke filled rooms in an installation filled with soldiers and grenades is something that we've grown to love. Add in gas, and we can't wait to check this new location out. 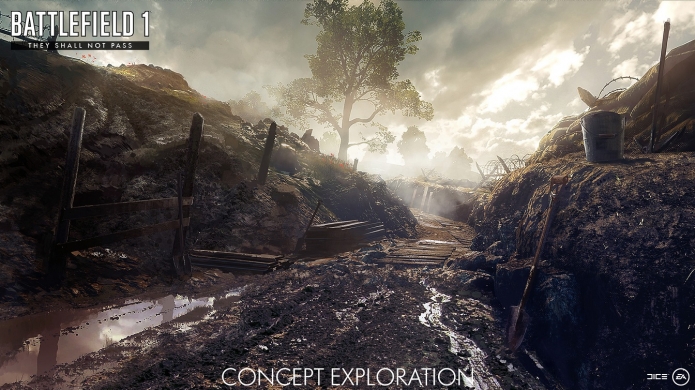 The new expansion will also expand on the tank warfare from the core game with the introduction of a new map set around the Battle of Soissons in late 1918. Expect bridges, trenches, and "something big" around the village of Fismes. A new super weapon eh? We're not sure what it could be, but if it's as impressive as either the armoured train or the giant airship, we're in for a treat.

They Shall Not Pass is the first expansion for Battlefield 1 and comes as part of the Premium Pass.

battlefield 1diceexpansionmultiplayer2017they shall no pass