Announced at BlizzConline we dive into this new take on an class-ic, and chat to Blizzard as the Rogue officially joins Diablo IV.
Diablo 4 - Inside the Rogue Reveal
Star Citizen Removes Backer, Refunds Money Over Blog Post
Post by Joaby @ 12:07pm 16/07/15 | 24 Comments Cloud Imperium Games, creators of Star Citizen, are causing ripples today with their decision to cancel the pledge of one of their earliest Kickstarter backers.

As concern continues to mount about the feature creep gripping Star Citizen, more people are questioning whether the project can be completed to a satisfactory standard. One concerned backer, Derek Smart (yes that Derek Smart), has raised such a fuss that CIG straight up refunded his money and disabled his account. 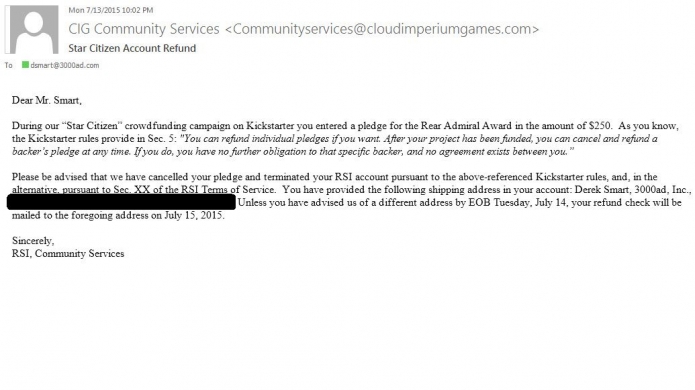 In a statement obtained by Gameinformer CIG explained that they believed Mr. Smart was using their game as a platform to promote his own.

We refunded Mr. Smart’s package because he was using Star Citizen as a platform to gain attention as part of a campaign to promote his ‘Line of Defense’ space game.


Which is a crock. The concerns Mr Smart details are mostly legitimate queries that many backers have raised, despite the self-aggrandising and self-promoting they contain.

Core to his complaints is that they started with a reasonable goal, they've ballooned out into something much, much bigger, and they've missed every target they've set for themselves. Which is all true, really. Not cause to "take a look at a user and decide that they’re so toxic or their intentions are so sinister that we simply don’t want them associated with Star Citizen."

That's what they said of Mr. Smart when they decided to cancel his backing.

Forgive me, but I'm going to editorialise a bit now.

Derek Smart cops a lot of shit, and he earned a whole heap of it. His argument regarding the unplayable mess that was Battlecruiser 3000AD is that his publisher, Take 2 Interactive, forced him to release the game when it was still in Beta. That he can't be blamed for that. Which appears to be true, but doesn't account for his defence of the game despite its shortcomings. Defence that was usually venomous.

Still, he wears a lot of that shit as a result of decades of experience working on projects that are remarkably similar in scope and inspiration to what Star Citizen promises to deliver. If anyone knows what a space game which is biting off more than it can chew looks like, it's Derek Smart. If smart wasn't already a word in English, we could probably describe creating a Space Game You Can't Possibly Finish as 'Smarting'. And in all honesty, it seems like Star Citizen is Smarting hard.

There are further worrying implications in this story. Derek Smart claims to have never posted on the CIG forum, and it appears that he hasn't. CIG cites his blog and twitter account as the origin of his 'sinister intentions'. They even claimed "we haven’t asked him to take down his post or sent him any C&D... Derek is entitled to his opinion, we just don’t want Derek as a backer."

You're damn right Derek is entitled to his opinion. And yes, 'management reserves the right to refuse entry to any customer' is a valid option on CIG's behalf. But Derek isn't trolling your forums or being disrespectful, he's criticising a project he believed in enough to back for $250. And removing him as a backer because he dared to speak out against a game that is half a year past release, based on his own extensive experience in the field of shipping games late and broken? That's shady as hell.

I hope Star Citizen releases, and I hope it's everything we've all dreamed it could be. I backed it on Kickstarter, I want the game they're promising. But hard questions need to be asked of them, and people who put their own money into the project get to ask those questions all they like. Kicking someone out because you don't like their tone is a terrible way to manage a situation like this.