SMITE is beginning to make big waves in the competitive mash-up space, and will be one of the first games of its kind to rock console by way of an Xbox One release which is currently in closed-beta. Developer Hi-Rez also announced today that Aussie servers are happening. 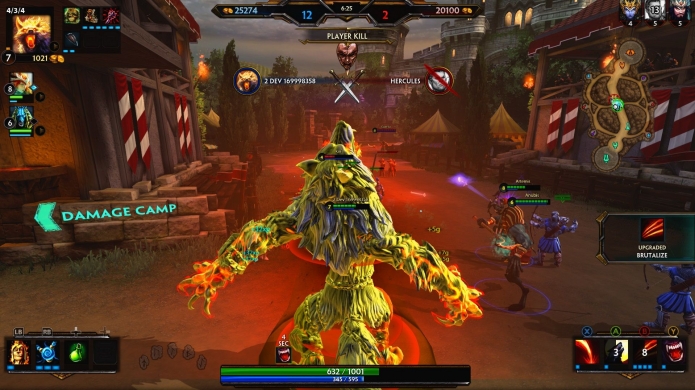 The Aussie servers will be available for Xbox One at the game's open beta launch, which happens next week, but ahead of then we actually have a stack of keys to give away to get you into the closed beta. Click here for more on those.

SMITE on Xbox One is currently in Closed Beta. Player accounts will transition seamlessly into the Open Beta, which will be publicly available to all Xbox One owners and is Free To Play.

By offering game servers hosted in Australia, players in Australia and New Zealand will enjoy smoother gameplay experience when choosing the Australia region for matchmaking or custom matches. Existing SMITE players preserve all god unlocks, experience, and cosmetics they have already accumulated.

The SMITE community is already enjoying amazing growth on PC, with a regular community play night, SMITE NITE, on Thors-days, and esports competition in an Oceania Pro League competition providing a pathway for an Australian team to attend the SMITE World Championships in 2016.

Designed from the ground up to play perfectly on a controller, SMITE is the first major MOBA to reach console and its action packed gameplay will test the skills of Xbox One players.

“We’re delighted to offer SMITE communities the best possible experience on PC and now console, and we are impressed with the growth of the game on PC in Australia. We are pleased to support the release of SMITE on Xbox One with dedicated Australian servers from next week,” said Andy Anderson, Xbox One Senior Producer, Hi-Rez Studios via press release.

On top of all this, a new God joined the cast this week -- Ravana, the Demon King of Lanka.

This Hindu god is a martial artist and mighty conquerer, who made terrible sacrifices for great power. Nine times he offered his own head to Lord Shiva, nine times in agony, it grew back. On the tenth sacrifice, he was granted invulnerability against gods and demons. This caused the god Vishnu to seek rebirth as a human warrior, Rama, and an earth shaking rivalry was born.

The Demon King enters the fray with the "Combo Breaker" PC for its action MOBA game, SMITE, the online Battleground of the Gods.

This content update introduces Ravana to the pantheon of playable characters within SMITE along with balancing updates that will significantly affect the competitive scene, and includes new God skins and voice packs for Tyrant Ravana, Dragon King Ao Kang and Iron Crow Hou Yi.

You can learn more about the new God via his reveal page, otherwise check out his reveal video below.